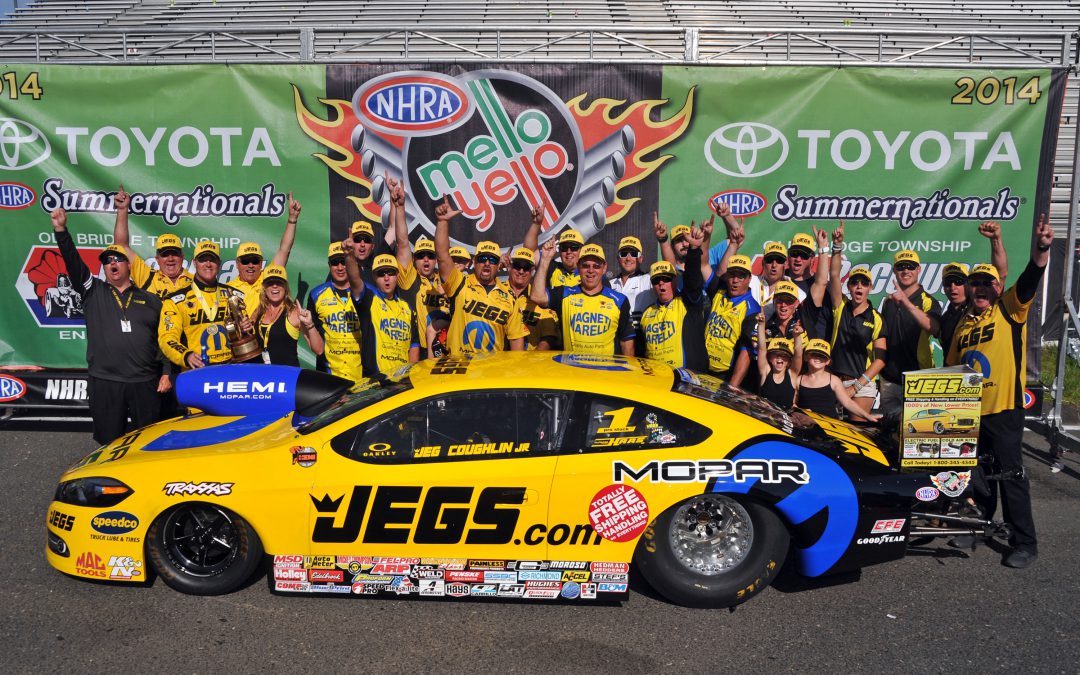 "This makes a great 'Happy Birthday' for crew chief Mark Ingersoll, who works alongside Adam Hornberger in tuning these two J&J Racing Mopars," Coughlin said. "Both the JEGS.com team and Allen (Johnson's) team on the other side of the pit did a great job today.

"These last three weekends have been a helluva hat trick for J&J Racing, winning all three races. I got Atlanta and Englishtown and A.J. won in Topeka, so we're on a great run."

The victory, the 58th of Coughlin's Pro Stock career, wasn't exactly easy. The track in Round 1 looked a lot better than it was with only five out of 16 cars making it down the dragstrip under full power. Coughlin wasn't one of the lucky ones to make it down cleanly, but he was able to gather his car together and limp to the finish line quicker than opponent Kenny Delco.

"That was a scare," Coughlin said. "Kenny's a hometown hero and I know they wanted to win. The track just wasn't there and neither of us managed to launch correctly. It was some violent shake and I had to let the car settle before I was able to get back on the gas and get down the track. Those moments seem to last forever.

"The guys worked on it, softened the launch sequence a touch, and we came back and ran a decent 6.586 against Shane Gray. We worked on it some more and really had a pass against Dave Connolly in a great side-by-side race (6.524 to 6.535) and that got us to the final."

Lining up against multi-time champion Greg Anderson in the money round, Coughlin was on his game once again, peeling off a 6.510 at 213.94 mph to earn the trophy over a wildly out-of-shape Anderson, who had to abort his run.

"Every win is special," Coughlin said. "Believe it or not, you do remember each one and even when you've been as fortunate as we have been and there are a bunch of check marks in the win column, you do have special memories from each race.

"Englishtown is extra special because it's one of the original races. I remember my dad racing here way back when, and I always dreamt of this place when I was growing up. To have won here a handful of times is quite humbling."

After racing three consecutive weekends, Coughlin and crew will now have a chance to regroup before the 14th annual Ford Thunder Valley NHRA Nationals, which takes place June 13-15 in Bristol, Tenn.