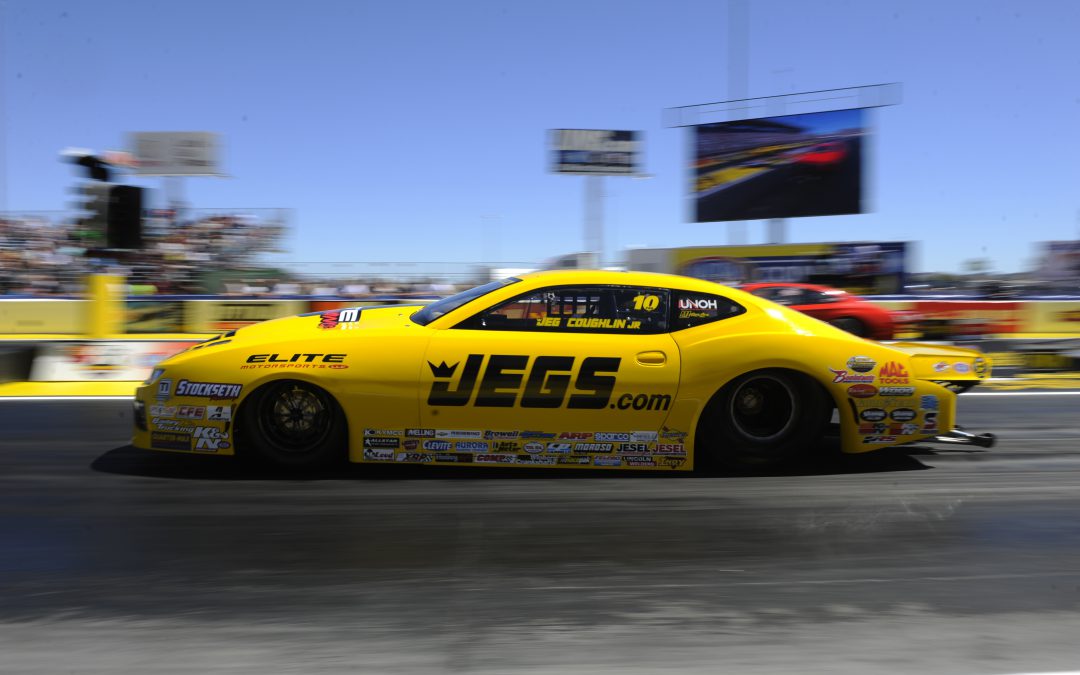 HOUSTON (April 17) — Six-time world champion drag racer Jeg Coughlin Jr. has amassed 76 national event victories in his drag racing career, including five at Royal Purple Raceway in Houston, site of this weekend's 30th annual NHRA Spring Nationals. Considering how the first four races of the year have gone for the popular Ohioan, he's hoping that number grows while he's in the Lone Star State, and he'll have two chances to add to his total.

Coughlin arrives in H-Town with a pair of semifinal and two quarterfinal finishes on his 2017 Pro Stock ledger. He's happy with the progress his JEGS.com/Elite Performance Chevrolet Camaro is making and knows it's only a matter of time before his team breaks through and scores another win.

"We've built a really solid foundation of data and performance with this new Rick Jones racecar since the start of the year and we're all very optimistic about this weekend," Coughlin said. "The work has been put in between events. We may have broken the record of early-season test passes because this crew is so focused on contending for every race win and the championship as well.

"This Elite Motorsports group isn't far removed from winning back-to-back championships with my teammate Erica Enders (in 2014 and 2015) so the desire to get back to that level is very strong. I think we're very close, not only with my car but with all the cars under the Elite umbrella. It's exciting to be a part of it all."

"I've always enjoyed racing in Houston," Coughlin said. "Early in my professional career we had two races a year at that track, one in April and one in October, and that fall race turned the track into Disneyland. It wasn't unusual with cooler conditions and being down there at sea level for world records to be set with regularity. Remember, we don't have a big supercharger hanging off the engine. We need Mother Nature's to give us perfect conditions, and we'd usually get those at the second race.

"I won my first Pro Stock trophy at the fall race in 1997 in just my second start ever in the class, which remains a wonderful memory for me. Then, because we had two races a year there, a bunch of us would go there in the offseason and test like crazy. The Angel family (track owners) even created an event, the Pro Stock Super Bowl, for us. It was always a good time."

Providing Coughlin with a second chance at glory this weekend, he will once again enter his trusty JEGS.com-sponsored Corvette Roadster in Super Gas.

"It's been a lot of fun racing the roadster this year," he said. "We haven't had any luck but that could change at any time. It's certainly capable of winning races, no doubt."