Pro Stock points leader Jeg Coughlin Jr. has work ahead of him at U.S. Nationals 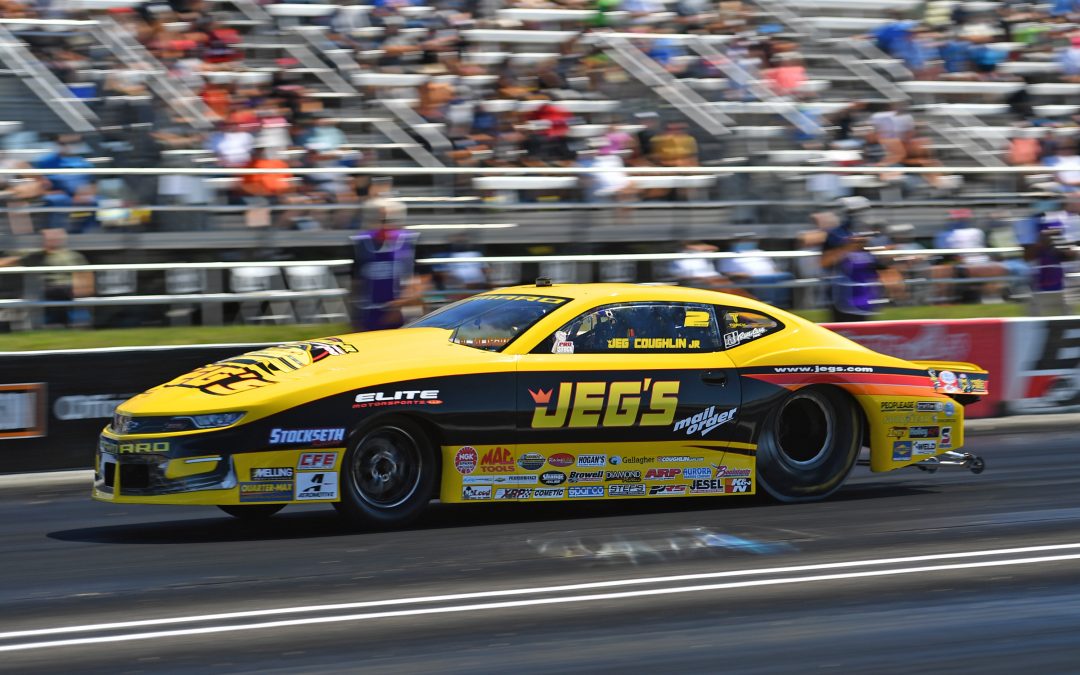 INDIANAPOLIS (Sept. 5) — After winning two of the first four national events of the year and building more than a two-round lead in the Pro Stock championship points, Jeg Coughlin Jr. came back down to earth a little on Saturday by qualifying 10th at the 66th annual Denso Spark Plugs U.S. Nationals.

It’s certainly not the end of the world qualifying in the bottom half of the elimination field, as Coughlin himself proved at this event 20 years ago when he raced from the 16th and final spot to his first win at the “Big Go,” but it’s reason enough for his JEGS.com Elite Motorsports crew to plan a late night of work at Lucas Oil Raceway. 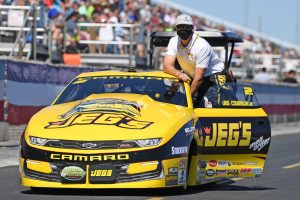 Jeg Coughlin Jr is ready for raceday at the US Nationals

“The team tested in Tulsa (Okla.) prior to coming here and we felt like we had genuinely made some big improvements in our overall performance, which, as we’ve seen, has already been really good,” said Coughlin, a five-time Pro Stock champion with 65 class wins. “We talked about the risk/reward of continuing what we started in testing when we got here and decided to go for it.

“I don’t think any of us dreamed we’d be as far off in Q1 as we were but the guys stayed after it and we prepared ourselves for this morning’s session. Yesterday we were 11 hundredths off the pace and we tightened that up to 4-5 hundredths off this morning. By Q3 we were just a bit more than one-hundredth off the quickest run so we’re making great strides in the right direction.”

With a best pass of 6.589 seconds at 208.49 mph, Coughlin knows he must start the day without the luxury of lane choice, which he surrendered to first-round opponent Kyle Koretsky. A second-generation driver from Pennsylvania, Koretsky topped out at 6.580 and 209.92 mph in qualifying seventh overall.

“If we race smart, we believe we’ll continue improving incrementally like we did in qualifying,” Coughlin said. “The guys are working hard on the car right now and I’m confident we’ll be a contender by tomorrow.”

Coughlin’s brother Mike Coughlin, the reigning Top Dragster champion from Division 3, is already one round into eliminations in his JEGS.com dragster. Mike beat Al Peavler in a double-breakout affair in E1, running a winning 6.097 at 224.92 mph to Peavler’s 6.059 at 215.62 mph. Both men were running on a 6.10 index. When racing resumes Sunday, Mike will face Darian Boesch. 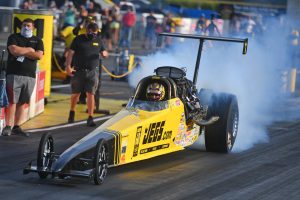 Mike Coughlin is ready for round two of Top Dragster

Another Coughlin who has already found success in eliminations is Paige Coughlin, Jeg Jr. and Mike’s niece, who has reached the fourth round of Super Comp in her JEGS.com dragster. So far, Paige has beaten Trevor Larsen, a red-lighting Mitch Withers, and Scott Vandewalker, She’ll next race Jordan Pratt. 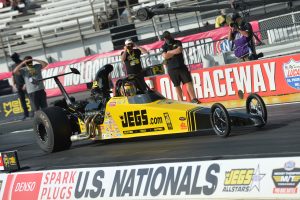 After racing to a runner-up finish in his last Pro Stock race, which was just the third of his career, Troy Coughlin Jr. failed to qualify for this event, finishing with a best of 6.643 at 207.27 mph in his JEGS.com Elite Mustang. The bump spot was secured by Val Smeland with a 6.630. 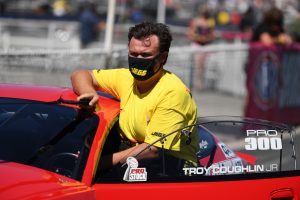 Troy Coughlin Jr. is returning to his pit area after making a run

“This is tough to take but it’s the cruel nature of drag racing,” Troy Jr. said. “We’re still learning this car and we got behind in qualifying and just couldn’t catch up. It certainly wasn’t for lack of effort from this team. We just didn’t have our best weekend. 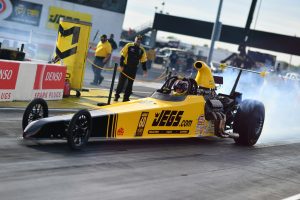 Team JEGS driver Makenna Brown lost a close race in the first round of Super Comp.