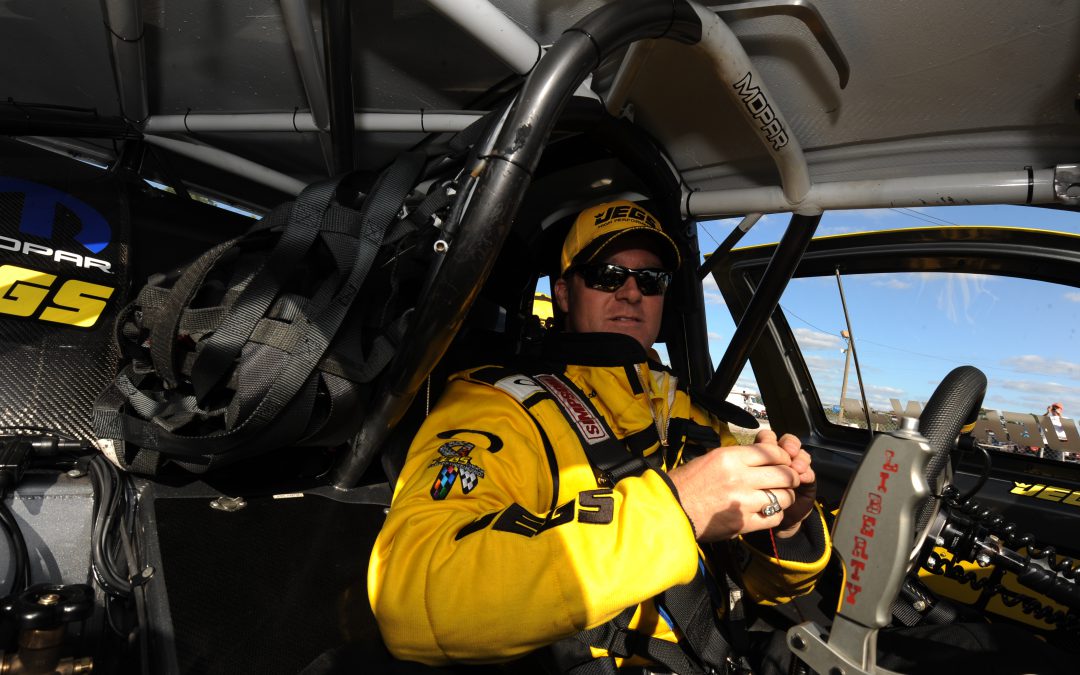 POMONA, Calif. – With a new alliance and potent new ride, Jeg Coughlin Jr. is anxious for the season-opener at Auto Club Raceway at Pomona and ready to make another championship push in the 2013 NHRA Mello Yello Drag Racing Series alongside defending world champion Allen Johnson and the J&J Racing team.

“I’ve never been more fired up about getting behind the wheel and competing,” said Coughlin, who will be teammates with Johnson this season. “I feel like the pieces are there. I think we can mirror the success that Allen had last year.”

“I feel really good about everything we accomplished in the off-season,” said Coughlin. “We strengthened our relationship with Mopar, and our alignment with J&J Racing is going to be very exciting.”

Last season, Coughlin got off to a great start with a runner-up finish at the Pomona opener, a track where he has earned six wins over the years, including two at the Winternationals. Yet it was his only final-round appearance of the season, ending in a ninth-place finish.

“Last year nothing really went wrong per se,” said the popular Ohio Pro Stock driver. “We worked hard to put together a program in the short time frame that was available, and we did a good job. Last year, we just weren’t able to work a lot of magic, but it was not for lack of trying. I tried my best as a driver. Today, it’s so competitive that most drivers wouldn’t dream of being worse than .030 on the Tree, and if you’re facing a performance deficit, you’d better get under that. I did what I could, but I also lost a lot of close races.”

After the discouraging 2012 season, Coughlin is enthused about the outlook for the new season and hopes to deliver a fifth Pro Stock world championship title in 2013.

“I’m as optimistic as ever,” said the 42-year-old driver. “We will be a team in every sense of the concept with our cars set up as identically as possible, sharing all of our data and benefitting from the expertise of the Mopar factory engineering. We’ve talked about going head-to-head on the track, and hopefully, when we do, it’s in a final round. That would be a win-win for the entire program.”

Newly-crowned world champion Johnson is also confident that this new partnership will be a win-win relationship and help him maintain his elite prowess in the new season.

“We just need to have more of the same from last year,” said Johnson, who won a career-best seven races and posted 10 No. 1 qualifying positions in an amazing 2012 season in his Team Mopar Dodge Avenger. “We have to continue with the consistency that we established, make good decisions, and maintain strong engine and drivetrain reliability. Having Jeg on our team, along with Vincent Nobile, will be a challenge, and so I will just have to do the best I can behind the wheel. All of us will get good horsepower from my dad, and our goal is to have all three Dodges in the top five, maybe even in the first three positions. It will be up to the drivers to determine in which order.”

Coughlin and his new teammates will face a crowded field of talented contenders all trying to reach the top and stay there throughout the season. The KB Racing team of Greg Anderson and Jason Line will not holding back in their pursuit of a seventh NHRA Pro Stock title, while breakthrough sensation Erica Enders-Stevens is aiming for her first championship following a stellar 2012 season. Others to watch include veteran driver Mike Edwards, the 2009 champion, young gun Vincent Nobile, and V. Gaines, another Mopar driver whose performance surged in the final leg of the 2012 season.

The competition looks to be just as intense in Funny Car, as a host of challengers will try to unseat Jack Beckman as the world champion. Beckman teammates Ron Capps, Matt Hagan and Johnny Gray will lead that charge, along with defending Winternationals winner Force, Robert Hight, Courtney Force, Cruz Pedregon, Alexis DeJoria, Tim Wilkerson, Bob Tasca, and Del Worsham, who is returning to the driver’s seat after a year spent working as a crew chief.

As always, fans will have the opportunity to interact with their favorite drivers as they’re granted an exclusive pit pass to the most powerful motorsports attraction on the planet. While visiting the pits, interactive NHRA Nitro Alley and the NHRA Manufacturers Midway, fans will also want to check out NHRA’s popular Hot Rod Junction presented by the Wally Parks NHRA Motorsports Museum that offers a spectacular display of many nostalgic dragsters, race cars and hot rods on display.

Fans also will want to take advantage of the popular Championship Sunday Track Walk, which is free to all Sunday ticket holders. This popular event gives fans the opportunity to walk down the legendary drag strip alongside some of the NHRA’s biggest stars.

Also, on Thursday at the track, fans will have the rare opportunity to attend a special Nitro Pit Party and Press Conference to kick-off the 2013 NHRA Mello Yello Drag Racing Series season in the pro pits prior to the first qualifying session of the season. Many of the top stars in the NHRA Mello Yello Drag Racing Series will be featured during the Press Conference, which starts at 11 a.m., including Antron Brown, Courtney Force, Tony Schumacher, Brittany Force, Jack Beckman, Ron Capps, Allen Johnson, John Force and Del Worsham.