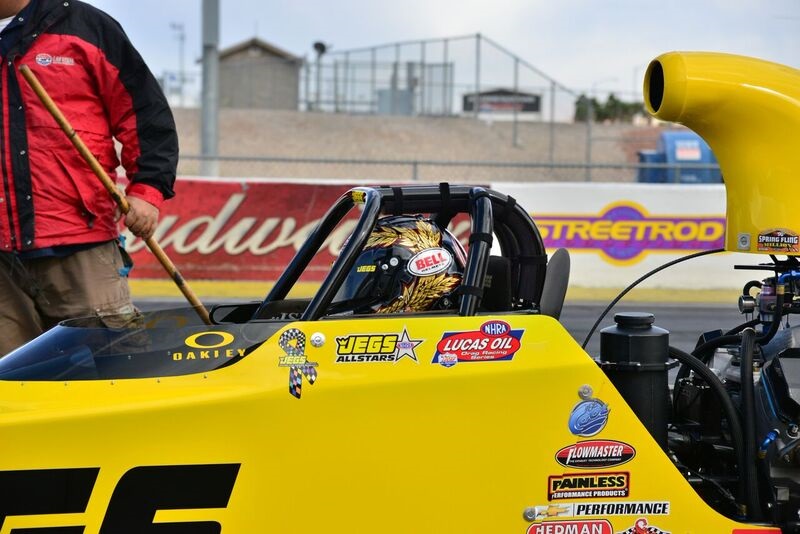 CHARLOTTE (April 18) — The unique format of the seventh annual NHRA Four-Wide Nationals presented by Lowes Foods presents the best drag racers in the world with a variety of challenges, all of which require extra intensity and laser-sharp attention to detail. Even the way drivers prepare for the one-of-a-kind event is different, and five-time Pro Stock champion Jeg Coughlin Jr. has taken his prerace routine to a different level.

"We just left Las Vegas after four full days of high-pressure bracket racing at the K&N Filters Spring Fling," Coughlin said. "I ran two cars, my JEGS.com Chevy II Wagon and my JEGS.com dragster, and added up 41 rounds of racing from Wednesday through Saturday. It was intense, but a fantastic experience.

"The best way to get ready for a unique race like the four-wides, in my opinion, is to get in a bunch of seat time in real race conditions. We got that done in spades. Not to mention I was hacking away at some of the best drag racers in the world, guys and gals that bracket race for a living. They may not be household names to people following the pro circuit but trust me, they are very, very good drivers.

"I've always been of the opinion that all the bracket racing I do has helped me to become a better Pro Stock driver. Three of the last 10 years all I've done is bracket race so it's something very familiar to me and I've learned how to take that knowledge to the cockpit of my Pro Stock car."

In conventional drag racing, two drivers line up side-by-side, take a single Christmas Tree, and race to the finish line. At the four-wides, those numbers are doubled, and there are many times when a driver cannot see where the three other pilots are located during a single race.

"It takes intense focus and sometimes you just have to assume the cars that are two or three lanes over are making good runs so you need to be as perfect as possible in what you're doing to get to the other end," Coughlin said. "What makes it different for us is we only do this once a year. It's a real challenge but a lot of fun, especially for the fans."

Coughlin, the driver of the Magneti Marelli offered by Mopar/JEGS.com Dodge Dart, has won at zMax Dragway in the past, in 2013, but that was at the fall race where normal drag racing rules apply.

"I'd love to add a four-wide trophy to my mantle," he said. "This Elite Motorsports race team has made so much progress since my teammate Erica Enders and I first dropped the clutch on these Hemis at Pomona. This group is used to winning, races and championships, and the guys have literally not taken a day off since we made the change to Mopar. We all expect big things this weekend, and we are certainly as prepared as possible to go rounds."