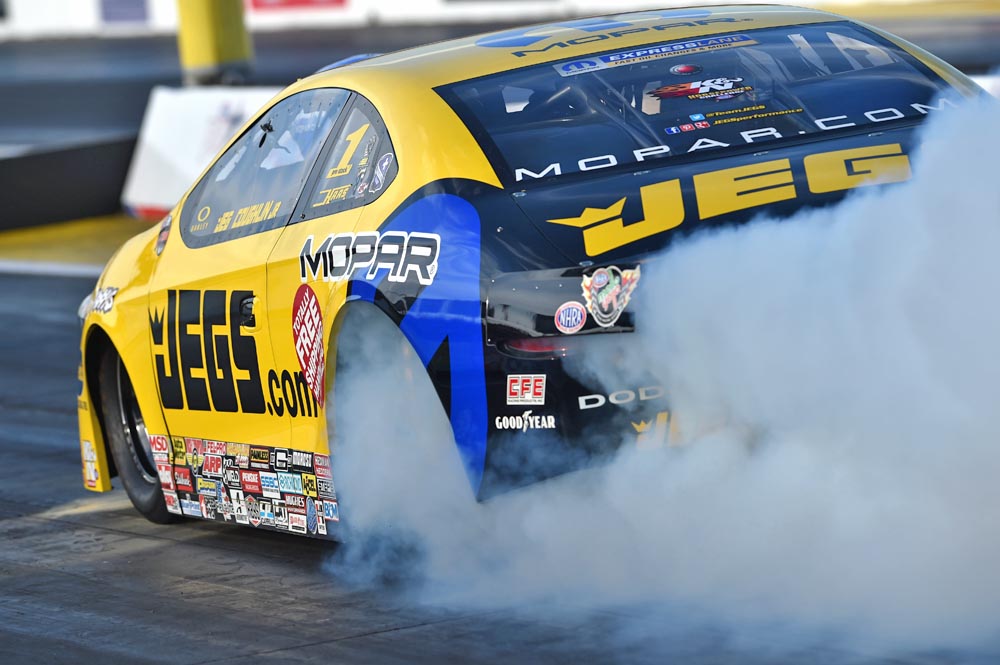 ST. LOUIS (Sept. 28) – Jeg Coughlin Jr. took his JEGS.com/Mopar Dodge to the No. 2 qualifying position and a semifinal finish in the AAA Insurance NHRA Midwest Nationals this weekend at Gateway Motorsports Park.

A loss to Jason Line in the semis ended his day early, but Coughlin held his head high after making a big step in performance on Saturday that helped him jump to No. 2 in qualifying.

"We took a big swing at it Saturday, and it connected pretty good," Coughlin said. "(Crew chiefs) Mark (Ingersoll) and Adam (Hornberger) and all the guys did a good job, too, and we had one of the better cars today."

After beating Deric Kramer in the first round and J&J Racing teammate Allen Johnson in the second, Coughlin lined up against Line with a berth in the finals at stake.

"I felt good behind the wheel all weekend, and I felt good today," Coughlin said. "Jason is tough, but for whatever reason, I didn't let the clutch out on time today. We'll learn from it and move on to the next one."

Against teammate Johnson in the second round, Coughlin's pass of 6.567 seconds at 211.20 mph matched Line for second-quickest of the round. Johnson shook the tires and slowed to a pass of 11.865 seconds at 73.96 mph.

After falling to Line, Coughlin was able to watch brother-in-law Jason Kenny win the Super Gas race. That came a day after Troy Coughlin, Jeg's older brother, won the Charlotte Pro Mod race that was postponed to St. Louis.

"We'll go back home, regroup and get ready for Reading. We still have lots of racing left this year, and we'll keep fighting all the way to the end."

Gateway marked the halfway point of the six-race Countdown to the Championship, with the NHRA Nationals next weekend at Maple Grove Raceway in Reading, Pa.