Quarterfinal finish at home track a highlight for JEGS team 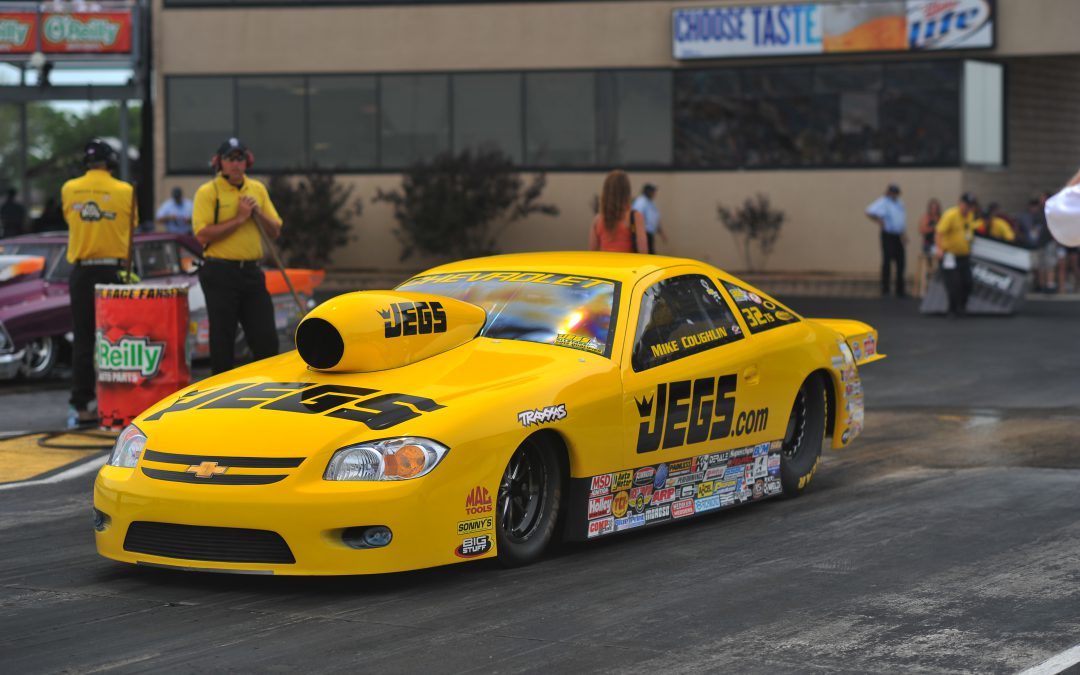 Coughlin, whose extensive racing résumé includes five national event wins and one division event victory at the venerable facility, was primed for another big weekend behind the wheel of his JEGS.com Chevy Cobalt Top Sportsman entry but lost a close race in the quarterfinals. After a great starting line reaction time, Coughlin fell to opponent Glenn Butcher by just six-thousandths of a second, or just a few inches, at the finish line.

“That’s kind of been the story of my year so far,” Coughlin said. “That was a winnable round by all means. I had it won but I gave it back at the finish line. I was ahead just before the finish line and I figured that if I hadn’t seen him by then he wasn’t going to pass me so I lifted off the throttle and sure enough, he passed me. It was just one of those things that can happen when you try to make every round perfect.

“We’ve been competitive at just about every race but the luck hasn’t been there. All the close races have been falling the other way. Honestly, there isn’t much you can do about it except keep your chin up and keep trying to do your best. We know we have a good program so eventually it will turn around for us.”

Coughlin was the No. 10 qualifier in the swift field with a 6.905. During eliminations, he defeated Travis Aragbright and Rob Harvischak before falling to Butcher.

“I felt comfortable and the car was doing pretty much what we wanted it to do,” Coughlin said. “It wasn’t the ending that we wanted but it was nice to race at home and have my family there. My father [Jeg Sr.] even came by to help us which was nice. Overall, it was a good weekend. We just didn’t win.”

Third-generation racer Troy Coughlin Jr. also had a frustrating weekend as he was unable to qualify for the extremely quick Top Dragster field and suffered a Round 1 loss in his Super Gas debut.

“This weekend wasn’t that it could be but it’s all in how you look at it I guess,” Troy Jr. said. “During time trials, I felt good in the Super Gas car and then in the first round I forgot to put the car in low gear before I staged. It’s one of those frustrating things that everyone has done at least once in their career. I’m new to Super Gas and I know it will take me a little while to get used to this car so I guess we could just chalk it up to a learning experience.”

The result in Top Dragster was especially frustrating since Coughlin posted a 6.74 elapsed time, but just missed the 6.72-second bump spot for the class after his TNT-built dragster developed an oil leak. Coughlin was one of nine drivers to run in the six-second zone and not make the field.

“We had a bad oil leak in the rear main seal,” Troy Jr. said. “We could have tried to run it but we decided not to take a chance. I didn’t want to oil the track, or risk making the problem any worse than it was. That 6.74 was just a warm-up pass. I’m sure we could have run 6.6s and gotten into the field but that’s just the way it goes. Overall, it just wasn’t out weekend.”