Quarterfinal finish represents a decent start to the Countdown for Jeg Coughlin Jr. 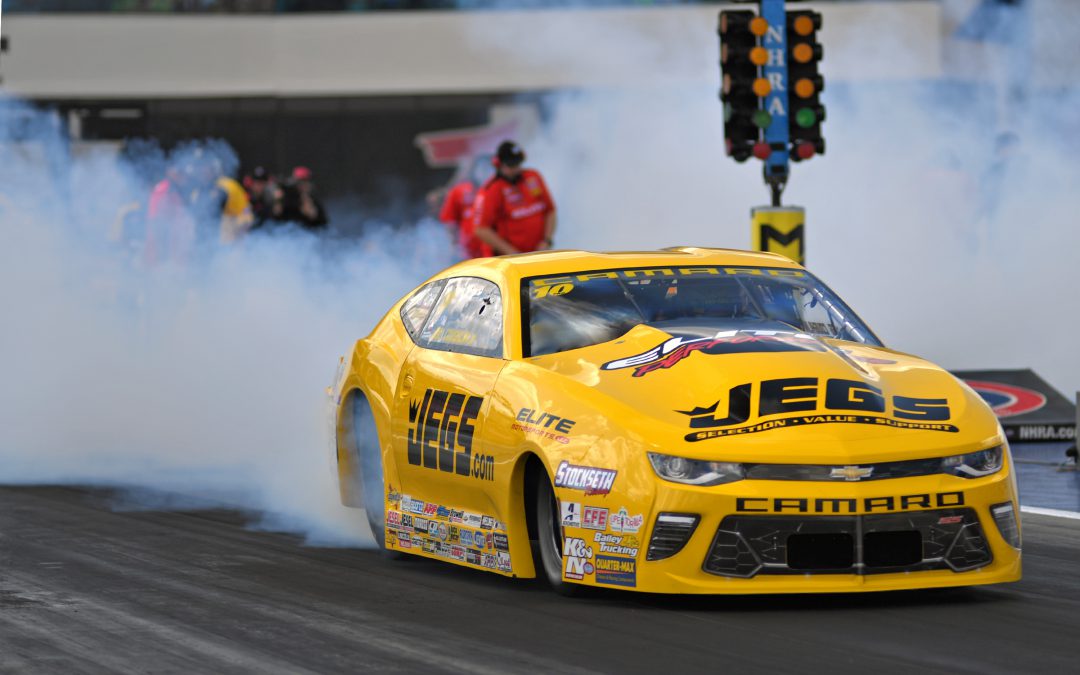 CONCORD, N.C. (Sept. 17) — Having won six NHRA championships and 76 national events in the past, Jeg Coughlin Jr. has become used to finishing a given race day on top of the heap. But he's also been around long enough to know that round wins are tough to come by so you sometimes have to take what you can and move on to the next race and fight another day.

That was the case Sunday at the 10th annual NHRA Carolina Nationals at zMax Dragway, where Coughlin reached the quarterfinal round before exiting the event after a breathtaking tilt against Bo Butner.

"We've had worse starts in the Countdown, and we've certainly had better so we will just move on to Reading, one of my favorite tracks on the tour, and keep up the fight," Coughlin said.

Coughlin opened race-day with a razor-close victory over Elite Motorsports stablemate Vincent Nobile, who he edged by .002 seconds with his 6.624-second pass at 209.52 mph beating Nobile's 6.632 at 209.14 mph. Nobile made it close with a slight .006-second reaction time advantage.

"I was fortunate to get by the first round," Coughlin said. "I call that a wake-up call. We were both .060 on the tree, which is uncharacteristic for both of us, but nevertheless we rode down through there and I was able to cross first, which was nice first race of the Countdown to get things kicked off with a win light."

Against Butner, the top qualifier for this year's Countdown to the Championship, Coughlin had another very close contest, leaving .007 seconds ahead but crossing the finish line second with a 6.640 at 209.04 mph to Butner's 6.629 at 209.23 mph. The final margin of victory was .004 seconds.

"We came back after the first round, made some adjustments on the racecar, and although we've really made some ground up this week, without question, we must have done something to upset it there," Coughlin said. "I haven't seen the run yet, but it just didn't post the elapsed time like we were looking for. We were both .030 on the tree, and I had a few thou head-start on him and he was sashaying around a little bit, but he gathered it up and just tracked us down by a couple of thou."

"I'm looking forward to getting up on the east coast," Coughlin said. "We have a great fan base up there and the Pro Stock cars really sing at Reading. We'll see what Mother Nature brings us. If we are fortunate enough to have some cool weather it will be fun to set the pace with some 6.40 laps. We will have to wait and see.

"We're going to stay and test. We made 15-20 runs in Tulsa leading into this race and definitely made some headway toward the car being a lot happier. We're the closest we've been in a couple of months.

"Same engine, same car, same people just a little bit different attitude within the team and the car, so it felt much better. They are going to try to fine tune some more things that we just didn't have the brass to try here in the Countdown. We will stick around tomorrow and run and try to sort out the missing horsepower. Stay tuned it's going to be a fun countdown. I'm looking forward to it.

"It was fun racing with brothers Mike and Troy as well as my nephew T.J. (Troy Jr.), who really did well in Super Comp, making it through four rounds of a very tough field. We've raced as a family for as long as I can remember so it's always cool when there is a group of us at any given race."