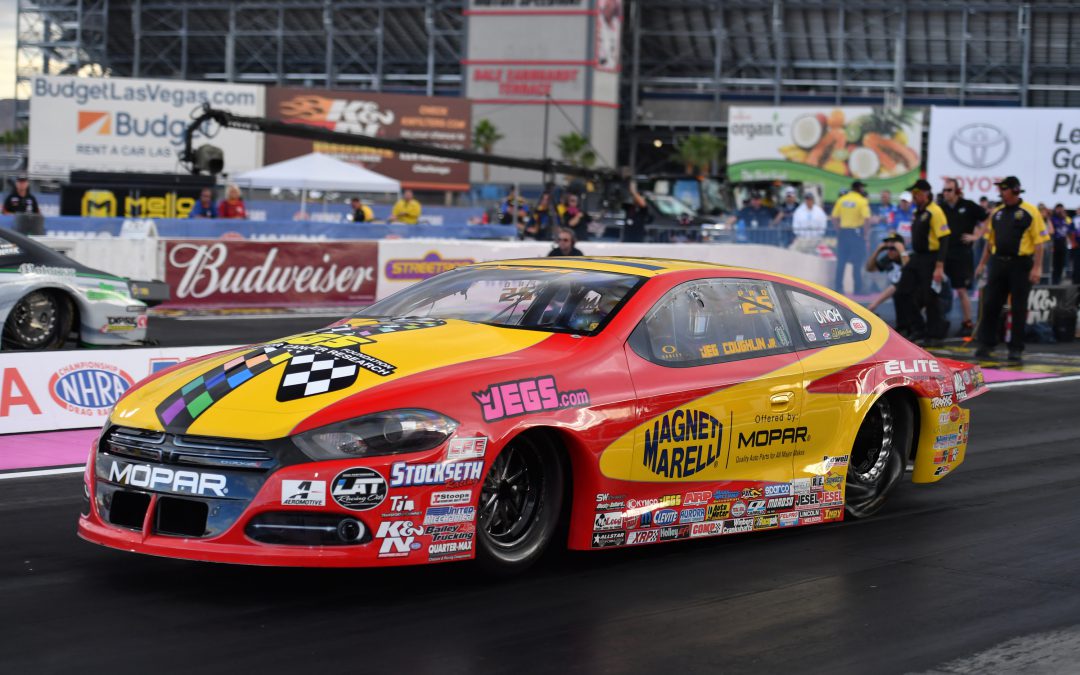 LAS VEGAS (Oct. 30) — After qualifying behind first-round opponent Alex Laughlin for the eliminations of Sunday's 16th annual NHRA Toyota Nationals, Jeg Coughlin Jr. knew he needed every advantage he could get to pull off a win. For the driver, that primarily means having a superior reaction time at the Christmas Tree, which Coughlin was able to do when he left in .015 seconds to Laughlin's .034-second start.

But despite the quick launch and the early lead it provided, Coughlin's Magneti Marelli offered by Mopar/JEGS.com Dodge Dart was caught and passed during the race with Laughlin crossing the finish line first with a 6.707 at 205.66 mph to Coughlin's 6.744 at 203.28 mph.

"We just didn’t have enough car today obviously," Coughlin said. "That’s kind of been on our sheet of music for most of the year. It hasn’t been for a lack of effort. We’re just constantly trying to get anything extra we can out of our Mopar Hemi Dodges and once again we just came up a little short there.

"I did have a little headstart on him but needed just a little bit more to stay in front at the other end and turn on a win light. We’ll move on to Pomona and take it from there."

Up next for Coughlin and crew is the season-ending 52nd annual Auto Club NHRA Finals, which run Nov. 11-13 in Pomona, Calif.

"The guys will have a weekend off of racing to work on things and we'll do all we can to close the season out by turning on some win lights," Coughlin said.