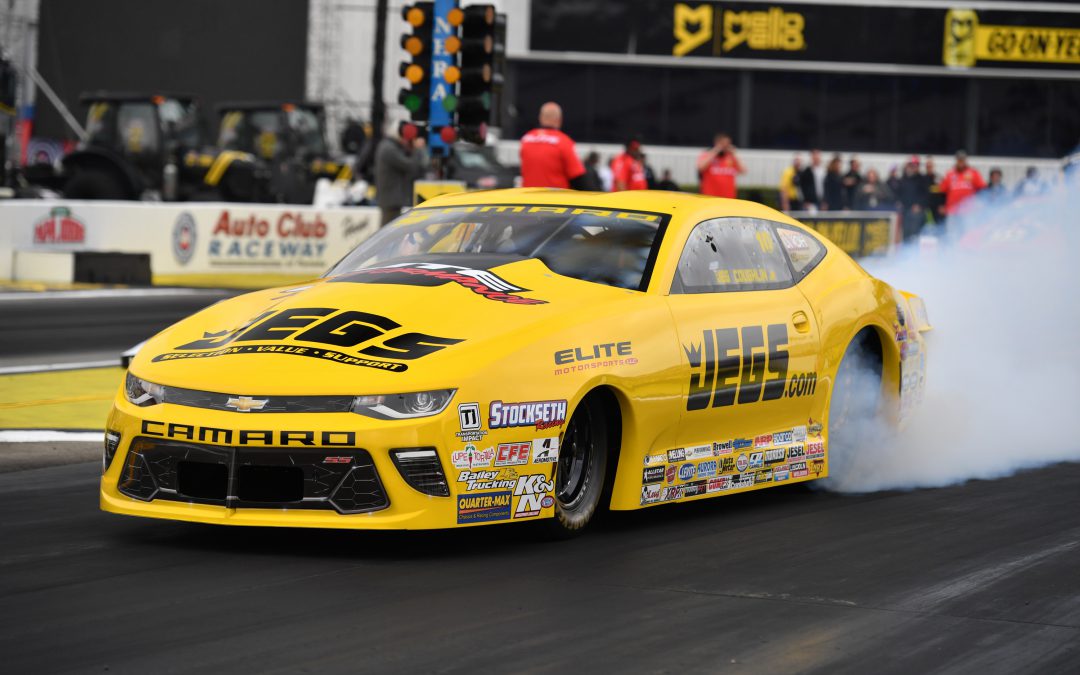 POMONA, Calif. (Feb. 11) — Jeg Coughlin Jr. successfully qualified his JEGS.com Chevrolet Camaro in the No. 7 slot at this weekend's season-opening 57th annual Circle K NHRA Winternationals and he heads into race day knowing a quick start to Sunday's eliminations will get the new year off on the right foot.

"I’m real pleased with the progression this week and through the first four runs of qualifying here at Pomona," Coughlin said. "We came out and fired a pretty good shot in Q1 with a .57 and just kinda maintained that for a couple rounds where some of our teammates and others were picking up around us.

"We were finally able to catch up here in the last session and run a .55, which was nice for us. I feel good with the consistency we’ve got with the three .57s and the .55 but I know we’ll have a tough row to hoe on race day. This Pro Stock field is really packed with talent once again this year."

Coughlin, a six-time world champion who has five Pro Stock titles and a Super Gas crown to his credit, seems completely rejuvenated by the expected resurgence of the Elite Motorsports race team. The group switched back to Chevy's in the off season, a brand that has carried Coughlin to the vast majority of his 76 race titles.

The elimination ladder shows Coughlin opening up race day opposite Deric Kramer, who qualified 10th with a 6.594 at 209.04 mph. Coughlin's best pass in his JEGS.com Chevrolet Camaro was a stout 6.553 at 210.60 mph.

"It would be great to have everybody covered by a couple of hundredths of a second but if you look at my career that’s never been a luxury we've enjoyed except a few rare times here or there," Coughlin said. "We’ll just get out there and see if we can’t stay snug on the tree to help as much as possible from the driver's seat.

"I know Mark (Ingersoll) and Rick (Jones, crew chiefs) and the rest of the team will put a great car underneath me. Fortunately, as we’ve proven in our past experience, you can win from damn near anywhere on the ladder anymore. That’s how tight it looks once again in today’s Pro Stock world so we’ll get some good rest and go out there and fight."

When not piloting the JEGS.com Chevrolet Camaro, Coughlin will be rooting for his nephew Troy Coughlin Jr., who qualified sixth in Top Fuel the SealMaster dragster, and his brother Mike who begins eliminations in Top Dragster in his JEGS.com rail early Sunday morning.