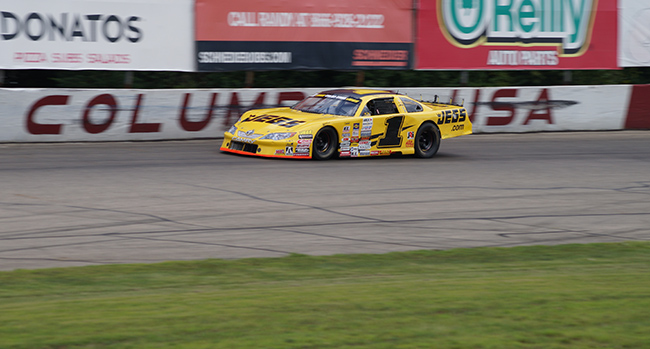 Cody Coughlin went to his home track on Saturday knowing it would be his last chance to score a win at Columbus Motor Speedway.  Unfortunately, Coughlin never even got the chance to go for the victory on Saturday night because Mother Nature spoiled the party once again.

Coughlin proved that he’d definitely be a contender for the win in the 30 minutes of practice he and his fellow drivers were given.  Coughlin shot to second on the speed charts before the first rain shower came and brought a premature end to the practice session.

With this race being the makeup date for the JEGS/CRA All-Stars Tour Memorial 100 from its originally scheduled Memorial Day weekend slot, Coughlin and his team had an abbreviated schedule for the event.  Qualifying was completed back in May, so all he had was practice and the race.

The track was eventually dried after the first shower, but a second storm came through and soaked the track once again.  The decision to cancel the event was made soon after.

“It’s a real shame, because I know we had a car that could win,” Coughlin said.  “We qualified well back in May and we were fast in practice today.  I know we could have moved from our seventh starting spot (due to an invert) to the front of the field fast, but unfortunately we won’t get a chance to prove that.  I would have loved to score a win here at Columbus, but unfortunately it wasn’t meant to be.

“Even though we didn’t get to race, I have to thank my team for all of their hard work and for giving me another fast car.  Jack (Smith, crew chief), Kevin (Hamlin, team manager), Scott (Wimmer, spotter) and Dave (Holt, crew member) work so hard to give me race winning cars and I appreciate that so much.  I also have to thank my family for always supporting me; God has blessed me with a terrific family.”

Coughlin’s next race weekend is a busy one.  He will be back in the Kyle Busch Motorsports Toyota Tundra for next week’s NASCAR Camping World Truck Series race at the Michigan International Speedway.  Right after that race ends he will hustle over to Flat Rock Speedway for the ARCA/CRA Super Series race where he will look to extend his points lead.