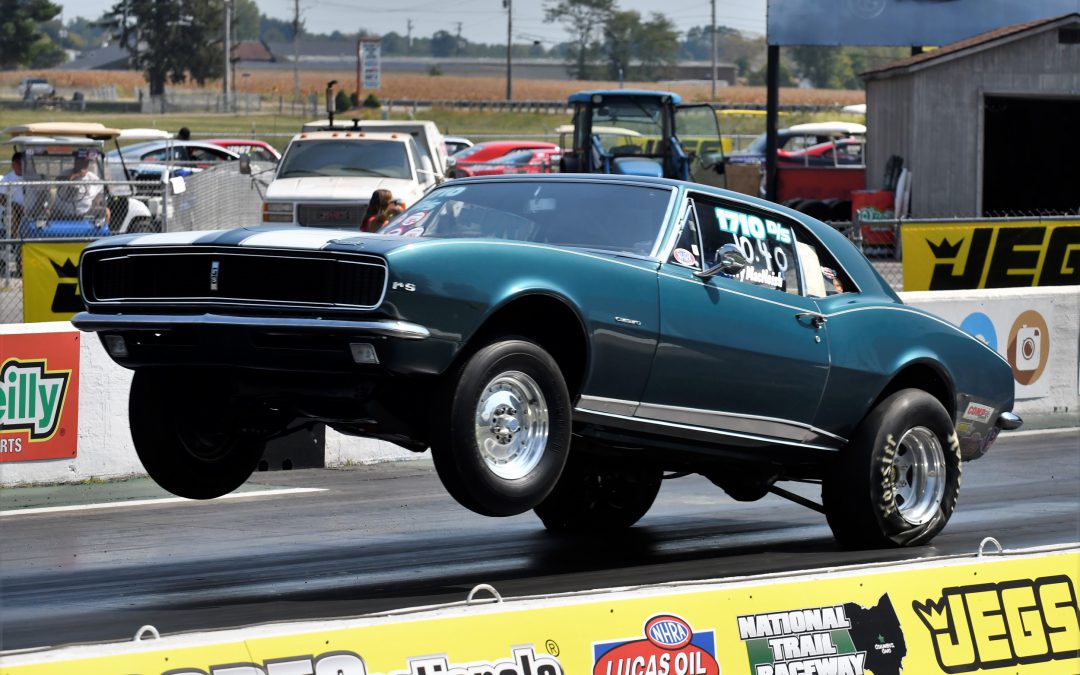 HEBRON, Ohio (Sept. 20) – David Rampy, Dan Jacobs, and Jerry McNiesh were the quickest qualifiers in Comp, Super Stock, and Stock, respectively, after the opening day of qualifying for the JEGS SPORTSnationals.

National Trail Raceway has been in operation since 1964, and with new ownership and management, the facility has undergone multiple improvements over the past two years, inviting racers back to "The Super Strip" for an exciting weekend of NHRA Sportsman Drag Racing. The event features Sportsman racers from across the country and a purse of more than $108,000, along with special bonus races and national event contingency payouts.

Rampy, of Piedmont, Ala., is the most successful racer in the history of the Comp Eliminator class and one of just four drag racers to collect 100 national event victories. He quickly established thepace here by driving his '32 Bantam roadster to a 7.248-second elapsed time (0.572 second under the index). Rampy leads a competitive field that also includes national event winners Brian Browell, Lee Zane and Greg Kamplain.

Jacobs, of Elizabeth, Ind., drove his '05 Chevy Cavalier to a 9.241, which was quick enough to take the pole in Super Stock over Russ Campbell, Ronnie Terrell and Bill Rink, who are the top four qualifiers in the strong 78-car field. Comp low qualifier Rampy is also a top contender in Super Stock after driving his Chevy Camaro to the No. 6 spot.

In Stock, McNeish, of Eldersburg, Md., sits atop a robust 93-car field with his four-speed '67 Camaro. McNeish ran a 10.457 on the 11.50 D/Stock index to take the No. 1 spot ahead of Steve Sullivan and George Wright, who are also one second under their respective indexes. Racers in Stock and Super Stock used Friday's qualifying rounds to prepare for the highly-anticipated class eliminations on Saturday.

The Day 1 leader in Top Sportsman presented by Racing RVs.com is Johnson, of Cynthiana, Ky., who powered his swift '55 Chevy to a 6.121 to pace the 32-car field. Johnson, a past winner of the JEGS Allstars event, enjoys a sizable lead over No. 2 qualifier Jeff Brooks (6.452) and No. 3 Boyd Beyer (6.476). The top 23 qualifiers in Top Sportsman have run in the sixes.

Nelson, Batesville, Ark., has been one of the hottest drivers in the Top Dragster class lately and he's the leader here after running a 6.119 on Friday. Nelson leads Brian Keller (6.140) and Danny Waddle Jr. (6.181). There are two more qualifying sessions remaining on Saturday.

On Friday night, all racers and crew gathered for Pizza and Movie Racer Appreciation Night hosted by NHRA, JEGS, and National Trail Raceway as a way to thank the participants. Talladega Nights: The Ballad of Ricky Bobby played on a 20-foot outdoor projection screen, with catered-in pizza, popcorn and soft drinks for all to enjoy.

Final eliminations will begin on Sunday and run throughout the day culminating with winner's circle celebration and the awarding of the coveted NHRA Copper Wally that is earned only at the JEGS SPORTSnationals.