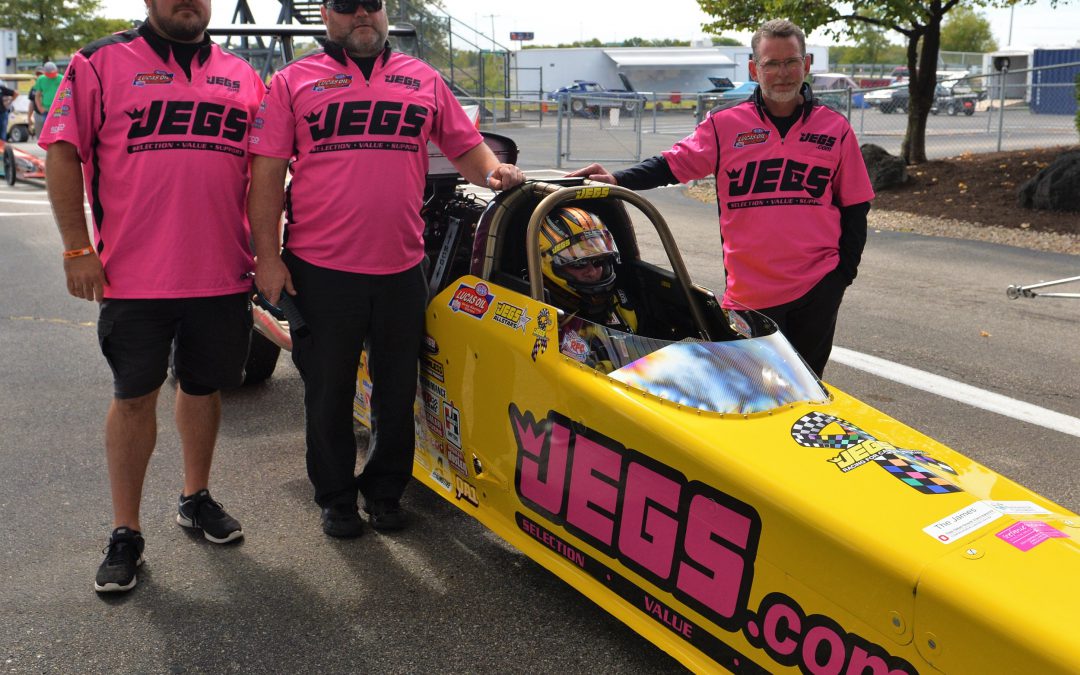 Across the pits, Team JEGS racer Mike Coughlin, one of Troy's three uncles, is in a tight championship battle of his own as he fights for the Division 3 Top Dragster crown.

"Our team is on a high, no doubt about it," Troy said. "We might as well keep it going. It's been an exciting time and we're having a ball. These guys are a lot of fun to race with and I feel extremely fortunate to be involved with this group."

Sunday's title-clinching triumph in Dinwiddie, Virginia, awarded the McPhillips Racing team the East Region championship, which pairs nicely with last year's North Central Region crown. The group entered the race needing nothing less than a victory and that's exactly what they delivered, pushing their season total to five wins in 10 final-round appearances.

"The guys have been making all the right decisions at the right times," Troy said. "Rich and Richie (McPhillips), Duke Roney, Charlie Wroten, Charlie Greco, John Flenard and Andy Goode give me a racecar that goes down the quarter-mile very time in very competitive times. I can't tell you the confidence that gives a driver.

"We're third overall and still have a chance to finish on top of the national points so why not go for it? It will probably take us winning our last two national events but I know we have a group of top professionals here that can pull that off."

Racing this past weekend at the D3 finale in St. Louis, Mike maintained his points lead in Top Dragster by out-performing the two racers that entered the weekend in second and third place. But a fifth straight win by fourth-ranked Danny Nelson kept the heat on Mike, making this weekend's Charlotte race yet another big-time event.

"Obviously, Danny has a great combination here lately and he's always been a damn good racer so we'll have our hands full holding him off," Mike said. "We still have the lead by 10 points so if we handle our business, we don't have anything to worry about. We had a little winning streak of our own in the summer so we'll try to duplicate that in Charlotte and put this thing away."

Nelson will not be racing in Charlotte as he's already claimed all of his national events. Instead, he'll likely find a divisional race somewhere to try and improve on previously posted results. Racers may claim three divisional and two out-of-division races.

"We don't watch the points when we're racing," Mike said. "We go out there and do our thing and count 'em up at the end. I'm ready to race and have some more fun with my brother Jeg Jr. (whose racing in Pro Stock at Charlotte) and my nephew Troy Jr., the new champ. His team has been absolutely crushing it. Plus, my son Clay is coming along. I'm very much looking forward to this weekend."