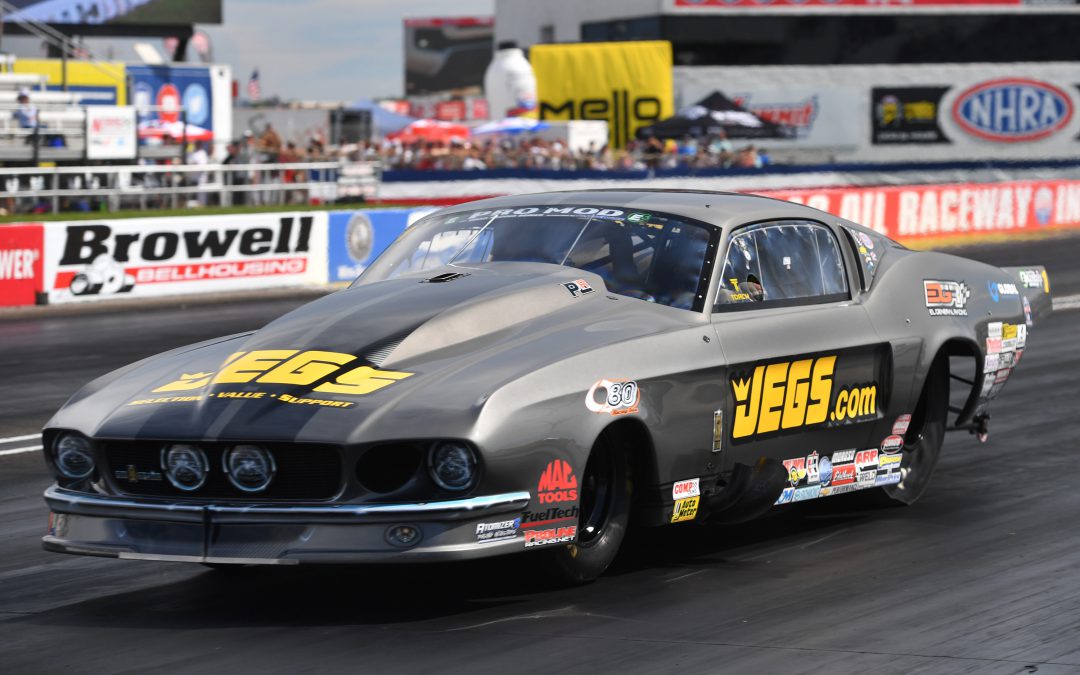 INDIANAPOLIS (Sept. 2) — The loud groan coming out of Lucas Oil Speedway at Indianapolis is the rest of the E3 Spark Plugs Pro Mod Drag Racing Series competitors after they collectively watched the rebirth of reigning and three-time class champion Troy Coughlin Sr., who has roared back into prominence at the sport's biggest event.

Troy Sr. zipped to the No. 3 qualifying position in his JEGS.com twin-turbo Ford Mustang and dismissed a very game Michael Biehle in the opening round of eliminations Sunday evening, 5.803 at 254.71 mph to 5.820 at 255.19 mph. It's the most promising race of the season for Troy Sr., who briefly retired from competition after last year's crowning only to return
in June.

"I knew Steve Petty (crew chief) would get this car sorted out," said Troy Sr., who missed the first four races of the year. "The nine weeks off between the last Pro Mod race in Norwalk and this weekend really gave the guys a chance to test the wheels off this car and get it to agree with Steve's tune-up. I think it's safe to say we've got a racecar again, although there is definitely more to get out of this thing.

"Missing a third of the season takes us out of any sort of competition for this year's championship but we can sure have some fun and shake things up in the class. We have five races left in the year, including this one, and we plan on upsetting a lot of people."

Pro Stock produced an extremely tight field of 16 quick cars with five-time Indy champ Jeg Jr. parked in the No. 7 slot after a best run of 6.627 at 207.56 mph. Jeg. Jr.'s JEGS.com/Elite Performance Chevrolet Camaro has been extremely consistent throughout qualifying with all five passes within .017 seconds.

"I feel great," Jeg Jr. said. "Our goal was to qualify in the top four and we just missed that (by .004 seconds). There are nine of us that posted 6.62s and we were kind of on the high end of that grouping. We could have been second as easily as we are seventh. That's just racing fate, or luck, and speaks to the talent assembled here this weekend.

"With five qualifying runs, the most we get at any national event throughout the season, we've been able to try a few things. It even allowed us to try different motors while the guys hone in on a good game day set up. So we will go into tomorrow aggressive and ready to race."

Jeg Jr. won the Indy Pro Stock title in 2000, 2002 and 2009. He also claimed the Super Gas trophy in 1992 and the HEMI Challenge crown in 2004. Jeg Jr. also is a three-time winner this season, having picked up trophies in Chicago, Bristol and Sonoma.

"It's the U.S. Nationals and we want to bring home this championship and send our JEGS.com/Elite Performance team into the Countdown with even greater momentum then we already have," Jeg Jr. said. "We open with a tough test against our teammate Alex Laughlin (6.629 at 207.62 mph) so we'll have to be up on the wheel from the start."

After winning two Top Alcohol Dragster races in a row coming into the weekend, Troy Coughlin Jr. and his JEGS.com McPhillips Racing team came back to earth at the sport's biggest event, qualifying 13th overall and exiting the competition in the opening round of eliminations after facing Shawn Cowie.