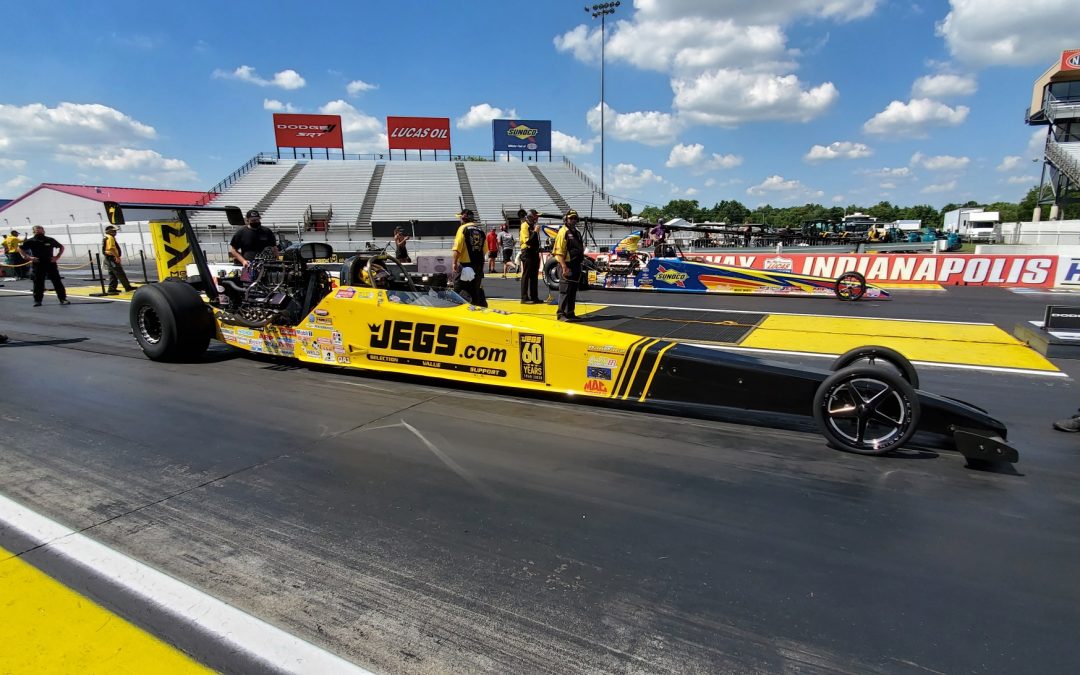 “Beech Bend Raceway Park has always been a favorite stop of mine dating all the way back to the 1970s when my brothers and I would go watch our dad (Hall of Famer Jeg Coughlin Sr.) race there,” Mike said. “With the amusement park right across the way from the drag strip, the place was a wonderland for kids like us, and I’ve noticed through the years there are many other drag racing families that feel the same way.”

Mike raced to his third Division 3 title last year, adding a Top Dragster championship to two previous D3 titles in Top Sportsman. Although it’s been awhile since he’s found the winner’s circle at Beech Bend — he last won in 1989 in Super Comp — he still has a lot of enthusiasm for this weekend’s event, which runs Friday-Sunday.

“We just had another double-header weekend in New England and this JEGS.com dragster continues to be a perfect ride,” Mike said. “We went to the semis in the first race and the quarterfinals in the other so we gained some good points there. Greg Cody, Tony Collier and Ryan Micke are so driven to win and they always have the car set perfectly for me. Every lose we’ve had has been super close and could’ve gone either way, so there’s nothing at all to complain about.

“My hat’s off to (track owners) Dallas and Alfreda Jones for keeping their place so nice. It’s a real joy to race there and it’s a track where Team JEGS has enjoyed a lot of success, so we’re all ready to go.”

With four trophies from Beech Bend, Troy Jr. is the most successful Coughlin actually competing this weekend in Kentucky. A two-time Lucas Oil regional champ in Top Alcohol Dragster, having won the North Central Region in 2018 and the Eastern Region last year, Troy Jr. claimed two Top Alcohol trophies here in 2019 and another one in 2018. He also won here in 2014 in the Super Gas class. Only Troy’s uncle Jeg Coughlin Jr. has more Beech Bend wins, having claimed victory five times in the Blue Grass State.

“It’s going to be an historic couple of weeks for us racing in Bowling Green and Indianapolis on back-to-back weekends,” Troy Jr. said. “First up is Beech Bend and I couldn’t be happier to go back to a place where we’ve won so many times before, not just me but the whole family.

“Justin (Beaver, tuner) and the guys at the shop have all the cars ready and we’re thrilled to continue our dream of drag racing together this year. Above all, racing for us is about family and no place says family like Beech Bend.”

Rising star Paige, who is one of Troy Jr.’s three younger sisters, will be taking a long weekend away from her studies at Miami University of Ohio to attend this weekend’s race. As always, she’ll be looking for a victory in her JEGS.com dragster but she’ll also be tuning up for a huge Labor Day weekend in Indy where she’ll represent her family in the JEGS Allstars event, which she qualified for last season.

“I’m very much looking forward to being back in the seat after taking a few weeks off to start school again,” Paige said. “Bowling Green has always been one of my favorite races on the divisional schedule and we have had good success there in the past.

“The last few races I attended we were trying some new things with the car and my crew chief, Justin Beaver, and (crewman) Tony Collier have this car running really great. I am ready to put the car back in line and go racing and to have some fun with my brother T.J. and Uncle Mike.”