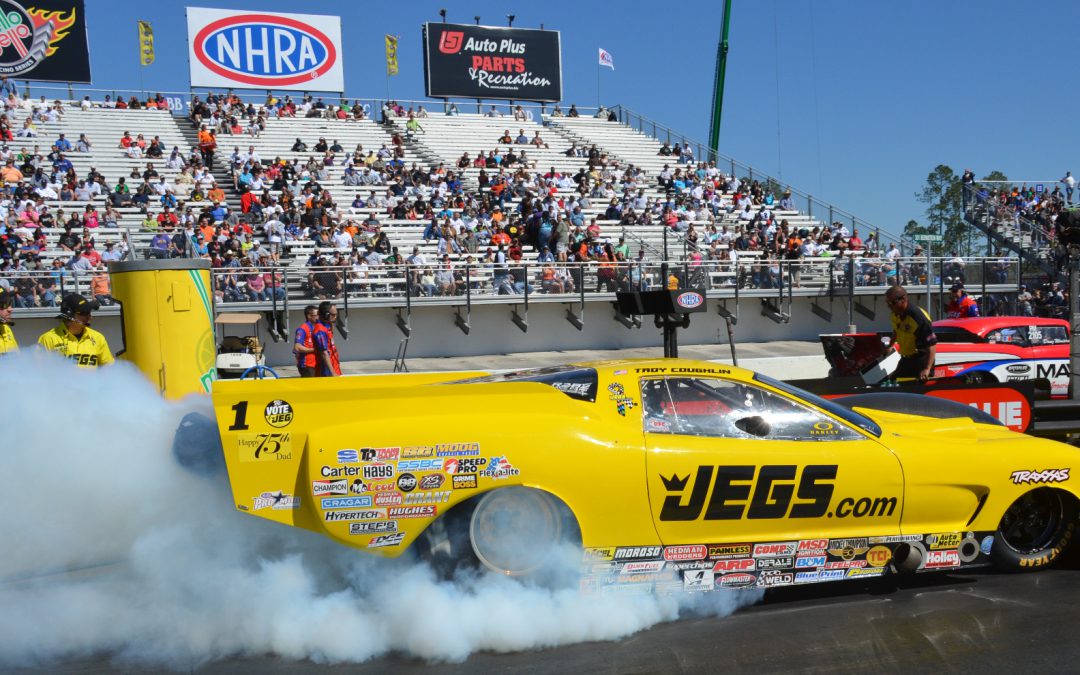 CHARLOTTE (April 18) — Troy Coughlin definitely is proud of the No. 1 on the side of his JEGS.com Chevrolet Corvette, which designates him as the current world champion, but the veteran Pro Mod driver knows it's little more than window dressing as he arrives in town for this weekend's Dollar General 4-Wide NHRA Nationals.

"Drag racing doesn't play favorites," Coughlin said. "You have to prove yourself every time you pull through the gates. It's great that we won the championship, but it doesn't do us a bit of good as far as qualifying for the next event. There are no provisionals.

"I'm actually okay with that. I like it. You are truly only as good as your last run."

To that end, Coughlin carries a bit of a chip on his shoulder into zMax Dragway. At the first Pro Mod race of the year, which took place a month ago in Gainesville, Fla., Coughlin qualified 10th in the 16-car field and was dumped in the first round of eliminations.

"There was nothing major that needed changing but the way the rules are set up this year for the turbo cars, versus what the nitrous and supercharged cars are doing, we simply can't afford to leave anything on the table," Coughlin said. "We need to get every fraction of a second out of the car every time we go down the track.

"Steve is the best in the business and he went out and ran an X-DRL race during out break and set a world record so his knowledge base continues to grow. I think we're going to be in good shape when we let 'er loose on Friday."

When he's not captaining his powerful 'Vette, Coughlin will be cheering on his younger brother Jeg Coughlin Jr., who currently ranks third in the Pro Stock standings.

"Jeg's having a great season so far and I'm anxious to see him race," Troy said. "They've had four races already in Pro Stock, whereas we've only had one, and he's already been to two finals so I'm hoping he breaks through and gets a big win this weekend. Of course the dream scenario would be for both of us to be in the winner's circle come Sunday night."

Pro Mod qualifying sessions are scheduled for 2 and 4:15 p.m., Friday, and 2 p.m., Saturday. Eliminations will begin with one round at 4 p.m., Saturday, and will continue at 1 p.m., Sunday.