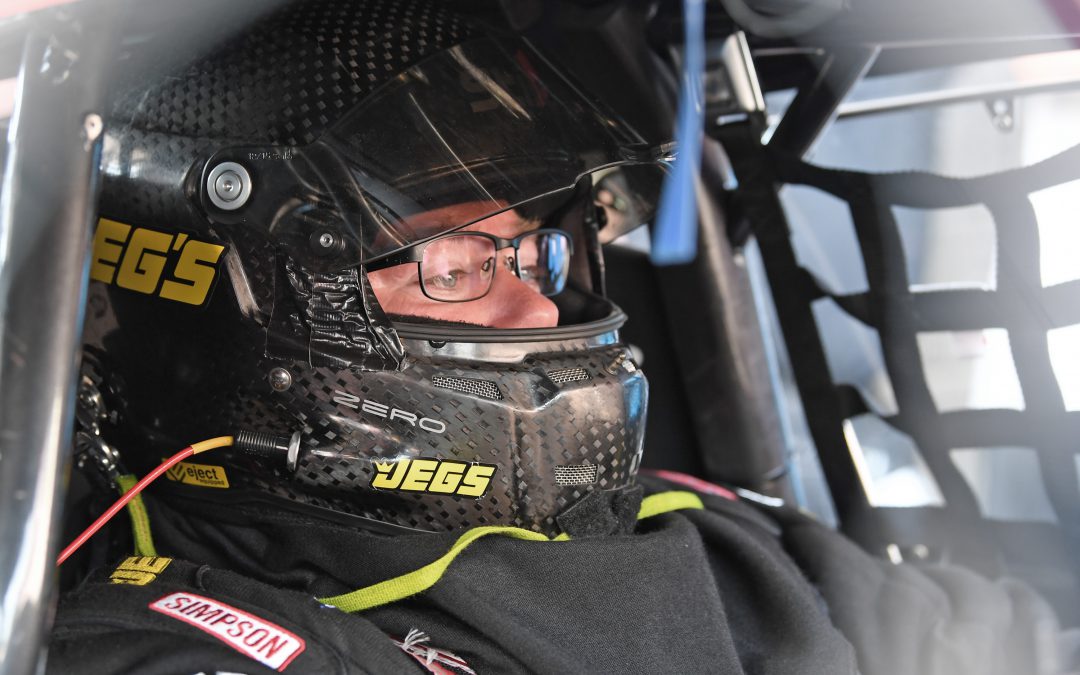 DELAWARE, Ohio (June 20) — Three-time and reigning world champion Troy Coughlin is just two races into his return to the E3 Spark Plugs Pro Mod Drag Racing Series and has yet to win a single round of eliminations, but he is quick to point out no one is having more fun as the national tour heads to Norwalk this weekend in his home state of Ohio.

"We got the band back together and we're having a blast," said Coughlin, who retired at the end of 2017 only to return a few weeks ago in Virginia. "Everyone's giving me a hard time about my 'retirement' but I just say I got fired from being retired. I missed it too much; the racing, the interaction with the fans, the fun with all the other drivers…I had to come back.

"My buddy Jose Gonzales (currently seventh in the points) told me in Gainesville, 'Hey Troy, I have an extra car so whenever you want to come back out and race, all you have to do is ask.' Well, as much fun as I was having with (children) T.J. and Paige racing their cars, I realized pretty quick I wasn't done. So here we are again."

Once the itch became too big to ignore, Coughlin and his longtime gang of crew chief Steve Petty and crewman Mike Rees and Kyle Pettis, along with their partners at Proline Racing and FuelTech, have been working hard on getting Gonzales' twin-turbo Ford Mustang up to speed.

"All the pieces and parts are there but we haven't found the exact balance just yet," said Coughlin, who had a DNQ in Richmond and lost in Round 1 at Bristol. "We have this race and then the summer break to get ready for Indy. We're focused on that for now and more importantly, we're having fun."

Coughlin will be racing with a full complement of family this weekend with brother Jeg Jr. competing in Pro Stock, sister-in-law Samantha in Super Comp, son Troy Jr. in Top Alcohol Dragster, daughter Paige in Super Comp and brother Mike in Super Gas. Family patriarch Jeg Coughlin Sr. also will be in attendance this weekend.

Troy Jr. is probably the most excited as he won at this facility on May 20th during the Cavalcade of Stars.

"Racing in the great state of Ohio with my family is extremely exciting for all of us," said Troy Jr., pilot of the JEGS.com McPhillips Racing Top Alcohol Dragster. "It’s an honor to have all of our family and friends amongst us. After winning here last month, we're definitely ready to go. We have a game plan in place; now it’s time to execute."

When he's not piloting his own dragster, Troy Jr. will undoubtedly be assisting sister Paige, racing her first full year in Super Comp.

"I’m really excited to be back at Norwalk this weekend," Paige said. "It’s a really special race to us because it’s close to home and we celebrate multiple birthdays together. My JEGS.com dragster has made a lot of progress and I’m learning so much. I hope to take all of my experiences so far and apply them to my racing this weekend."

Mike is taking a break from Top Dragster this weekend as his team works on his regular ride, but he'll still be racing the event he won in 2014, this time in the JEGS.com Super Gas entry. As an added bonus, his son Clay will be joining him at the track.

"The drive shaft came out of my dragster in Chicago and did quite a bit of structural damage so the guys have taken it to Dan Page to get it repaired," Mike said. "It was a weird deal but could have been much worse because it came out right at the finish line. I feel lucky to have escaped with just car damage.

"In the meantime, I sure didn't want to miss racing in Norwalk because it's one of my favorite tracks and having a chance to drive Jeg's Corvette Roadster in Super Gas will be fun. I haven't raced Super Gas since 2004 but I know Justin (Beaver) and Tony (Collier, crewmen) are experts in the super classes so I should have a great chance to turn on some win lights."