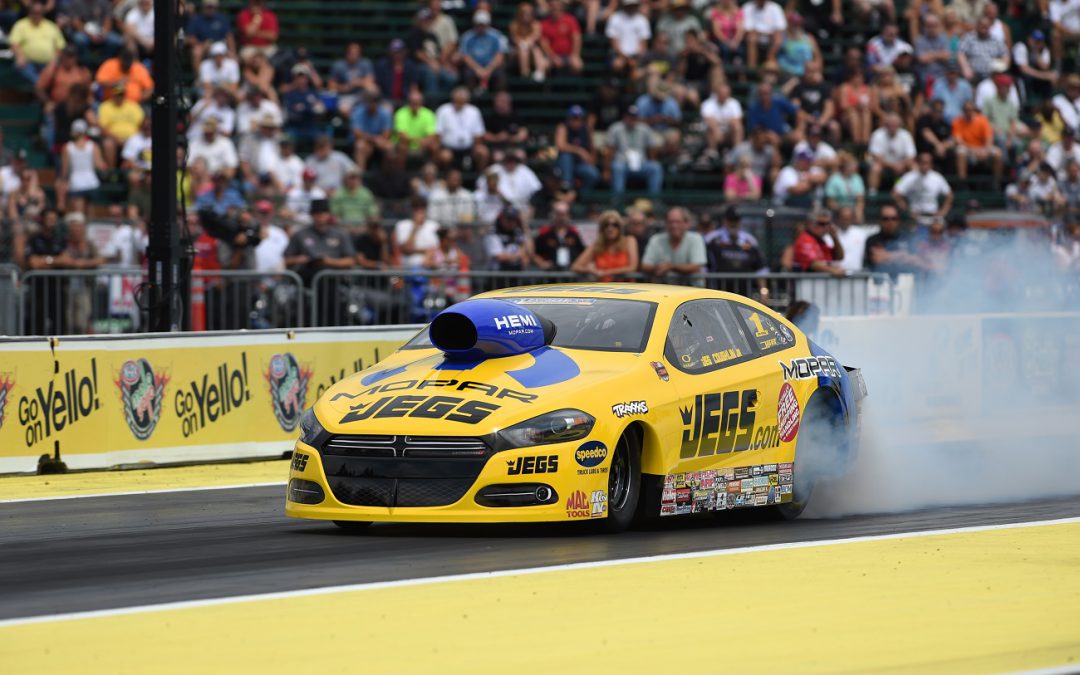 ST. LOUIS (Sept. 22) — Jeg Coughlin Jr. has recorded two victories at Gateway Motorsports Park, winning there in 2002 and 2009. Now the five-time and reigning Pro Stock champion of the world says it's imperative he challenges for Gateway win No. 3 if his JEGS.com/Mopar Dodge Dart is to remain in the championship hunt.

"We haven't quite gotten the start we wanted in the first two races of the Countdown," Coughlin said of NHRA's six-race playoff system. "A first-round and a second-round finish isn't going to get the job done. Fortunately, we have four races left in the fight for this year's Mello Yello championship and that's enough to reach our ultimate goal.

"It's up to us to put ourselves in position to win it all. That starts this weekend. We've pretty much used up all our second chances. It's time to win races or at the very least get to the final round to have a real chance."

There's no question Coughlin and crew have the ability to make a run. Earlier this season the team raced to three consecutive finals, winning in both Atlanta and Englishtown, N.J. Those three final-round showings were bracketed by semifinal results. He also scored runner-up finishes in Denver and Brainerd, Minn.

"We have all the parts, pieces and personnel in place," Coughlin said. "This race team has gotten on great streaks multiple times in the past, both with my car and with Allen's (Johnson, teammate) hot rod. We just need it to unfold for us again in these final four races.

"I can tell you I have great confidence behind the wheel. I know the guys will give me a competitive car every round and I'm comfortable with my driving. On top of that, we're going to close out the year at four racetracks I really like and ones where we've had great success in the past."

Aside from his two wins in St. Louis, Coughlin has four victories at Maple Grove Raceway in Reading, Pa., five more at The Strip at Las Vegas Motor Speedway and six at Auto Club Raceway in Pomona, Calif.

"I'm ready to get after it," Coughlin said. "It's a very exciting time of the year and even though we've made it more exciting than necessary for our team, this is what we live for.

"St. Louis will be fun. We're going to get after it the best we can and I'm going to enjoy watching my brother Troy race in Pro Mod and his son/my nephew Troy Jr. race in Super Gas and Super Comp. T.J. has been a winning machine lately. I wouldn't even change my underwear if I were him. Maybe he can give me some pointers."

Pro Stock qualifying sessions are scheduled for 2:45 and 5:15 p.m., Friday, and 1:15 and 3:45 p.m., Saturday. Eliminations begin at noon, Sunday. ESPN2 will carry qualifying and elimination action.