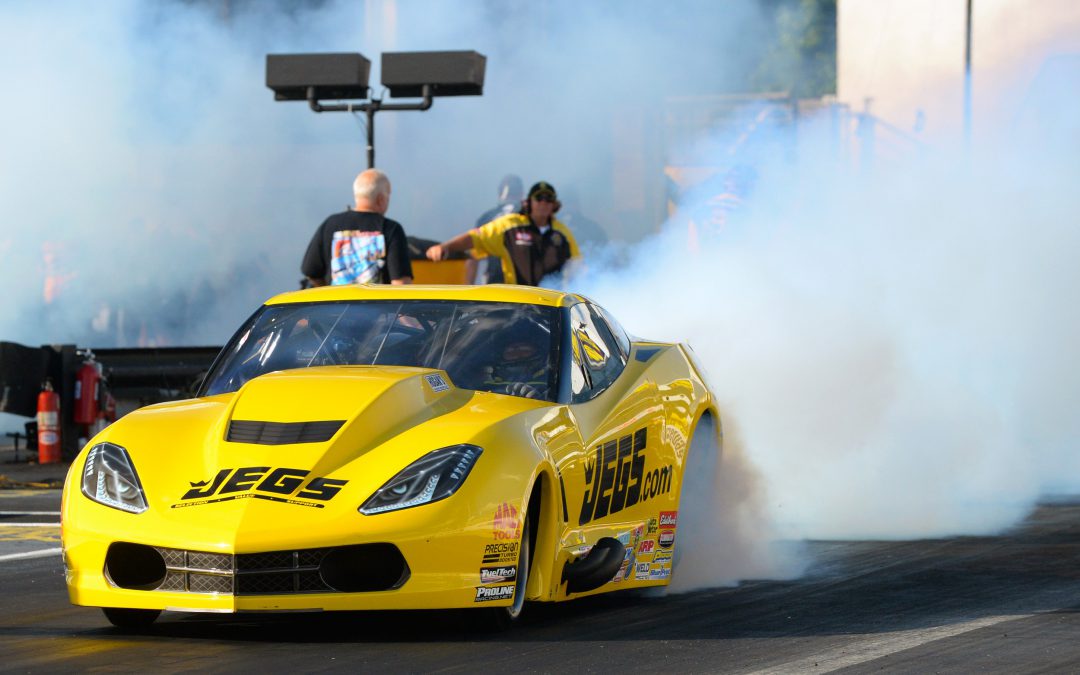 ST. LOUIS (Sept. 27) — Two-time Pro Mod world champion Troy Coughlin will be the first to tell you he dodged a big bullet at the last J&A Service Pro Mod Drag Racing Series event two weeks ago in Charlotte when he inexplicably lost in the first round yet kept his championship hopes very much alive when title rival Mike Castellana exited one session later.

"It could have been a walkaway for Mike but he ran into a tough opponent Round 2 when he raced Jonathan Gray so we're still in the hunt," Coughlin said. "I don't think anyone is surprised Jonathan is running so well. He's got Rickie Smith tuning that car and they're going gangbusters, for sure. It's a good thing they haven't run all year or they may be the ones we are all chasing at this point."

The unexpected turn of events for the two most dominant cars in the class left Coughlin just 48 points, or a little more than two rounds of racing action, behind Castellana with two races left in the season, including this weekend's sixth annual AAA Insurance NHRA Midwest Nationals at Gateway Motorsports Park.

"We still need Mike to get beat early and we need to go a round or two more on race day to tighten this thing up for the finale in Las Vegas," Coughlin said. "They definitely should out-qualify us with recent rule changes and the weather we're expecting this weekend, so it'll be the work we do on race day that'll ultimately put us over the top.

"The good news is that even though we lost a bunch of horsepower with that unexpected rule change, we've still got a fighter jet here with our twin-turbo JEGS.com Chevrolet Corvette C7. We plan to go as hard as we can every single round, including during qualifying, and we will not quit until it's over."

Coughlin has one victory (Bristol) and four runner-up finishes (Charlotte 1, Englishtown, Norwalk and Indianapolis) in the Pro Mod class this year. Additionally, he is the defending event champion of this race. He also won here in 2012, a crucial race in his championship charge that year. Coughlin also won the Pro Mod world title in 2015. He has been runner-up to the championship in 2013, 2014
and 2016.

"A lot of things weigh on our side being defending champs of this event," Coughlin said. "We've got some great data from last year and it appears the conditions will be about the same so we should know what to do.

"Big thanks to everyone at Proline and Fuel Tech for the hard work they've put in on our behalf after the rule change. We knew right away we needed to get this thing to accelerate better and run more ET and they've helped us down that path. We probably can't back all the horsepower we lost, but if we could get half we'll have a chance."

Pro Mod qualifying sessions are scheduled for 3:30 and 6 p.m., Friday, and 12 p.m., Saturday. Round 1 of eliminations will be held at 3 p.m., Saturday, with subsequent rounds taking place beginning at 12:20 p.m., Sunday. (All times are local and subject to change.)