Resume building: Troy Coughlin Jr. raging away in TAD with eye on return to pro ranks 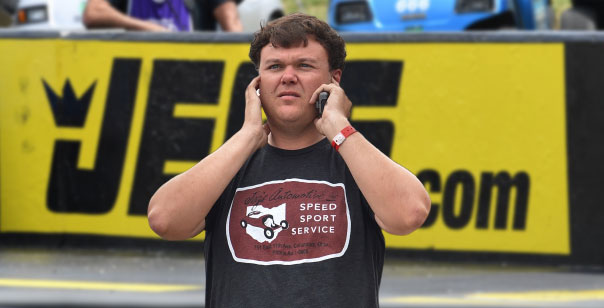 But winning for a third time at drag racing's biggest event isn't the No. 1 driving force for the third-generation driver out of Delaware, Ohio, the home of his family's high performance parts empire. Coughlin's goal is much easier to understand.

"Indy week 2019 is already a success in my opinion," said Coughlin, an Indy victor in 2010 (Super Comp) and 2014 (Super Gas). "We're already here, ready to set up in the pits, excited to go drag racing with some great cars, and most of all, we're going to have fun. What more could I ask for?"

Like a bumper sticker on an old pickup that declares "Any day fishing is a good day," Coughlin lives and breathes all things drag racing. The road trips, the competition, the perfection required, the time spent with friends and fellow competitors, even the business side of motorsports, those are the things that stir Coughlin's soul.

"It takes a lot to do this," he said. "It takes even more to win. You get with a team like I have at McPhillips Racing and watch the long hours, the selflessness, the dedication these guys have to being the best, and you start to understand what needs to be done to even have a chance.

"We've had some great chances the past year and a half and won a bunch of races and a regional title, we were in the mix for a national championship last year and we're back challenging again this year. I mean, for a kid that literally came to the drag strip for the first time in a baby carrier, I must be the luckiest person in the world."

Lucky or not, as soon as he was old enough to climb in a junior dragster, the son of three-time Pro Mod world champion Troy Coughlin has proven his value as a driver, racing in Super Comp, Super Gas, Top Dragster, Pro Mod, Top Alcohol Dragster and even Top Fuel. He's already won seven national events and eight more at the divisional level, as well as a good amount of high-dollar bracket races.

"Of course, I have even bigger dreams," Coughlin said. "I'd love to have another chance at Top Fuel. A lot of things need to fall into place for that to happen. It's an expensive endeavor but one that can definitely reward the right sponsor if it's done correctly. That's pretty obvious when you look at the successful teams out there.

"I spend a lot of time looking for companies who could benefit from a relationship with us. If it were easy, there would be 64-car fields. But it takes a lot of work to put it all together. I won't give up, ever, and just like my racing, I'm learning to love the challenge."

In the meantime, Coughlin appears to be a lock to keep building on his already-impressive resume, both as a racer and a spokesperson for some potential backer that may need a fresh face to put on their company's next advertising campaign.

"There is definitely a lot of value to winning races and competing for championships in the Lucas Oil Drag Racing Series," Coughlin said. "If you look back, this has been the way into the pro ranks for so many stars of our sport. You not only learn how to drive, but how to win, how to accept defeat, how to deal with the media and sponsors, the lifestyle you have to live to give yourself the best chance to succeed. It all happens here.

"I get motivated by so many things. I see Rich and Richie (McPhillips), Duke Roney, John Flenard, Andy Goode, Charlie Wroten and Charlie Greco working on the alcohol dragster and that makes me dig so deep. The nice things fans say, that goes a long way with me. To know I'm representing my grandfather, my dad, my uncles, really the entire Coughlin family, that is huge motivation.

"I even chase down crazy things. Like, if I win this weekend in either Top Alcohol Dragster or Super Comp, then I'll do something my dad did in 1991 when I was 1 year old, which is winning in Bowling Green one weekend and then Indy the next. That way when we're sitting around the table at Thanksgiving I can say, 'yeah, I did that too, Pop.'''