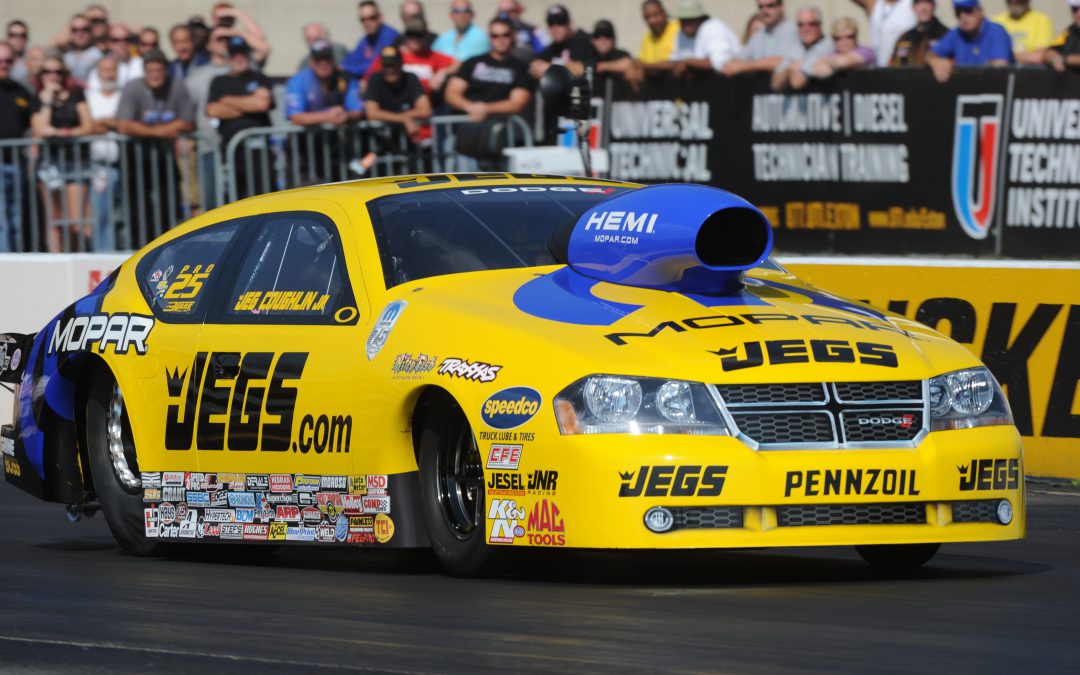 READING, Pa. (Oct. 8) — The consistency and quickness that five-time world champion Jeg Coughlin Jr. has been searching for in his JEGS.com/Mopar Dodge Avenger finally arrived in a blast of cold air over a long and rainy weekend at Maple Grove Raceway.

Riding a string of 6.52-second passes, Coughlin beat veteran Ron Krisher on Sunday and then cracked the hottest driver in Pro Stock, Erica Enders, Monday morning to reach the semifinal round of eliminations for the first time since mid-April. With a trip to the finals on the line, he then fell to Dave Connolly by .01 seconds.

"It feels great to see our car number at the top of the (performance) sheets," Coughlin said. "The numbers are encouraging and I feel great behind the wheel. This is the most efficient the car has felt all year, and not just in eliminations on Sunday and Monday, from the start of the weekend we were much better than we've been.

"We managed to gain a few rounds on the drivers that were just ahead of us in the points so we're moving in the right direction. Our mile-per-hour is about eighth best now so we have some more to gain there but Roy (Simmons) and Nick (Ferri) are hard at it in the engine shop and should have some more goodies for us by Vegas."

Coughlin qualified seventh with a 6.552 at 210.37 mph. Then the cooler weather blew in and numbers across the board plummeted. He beat Krisher with a 6.522 at 211.86 mph Sunday before rain pelted the area and moved the action to Monday.

In the quarterfinals he faced Enders, who has stormed through the second half of the season with four victories. This time she didn't have enough steam to match Coughlin, who beat her 6.589 at 212.43 mph with a 6.523 at 211.63 mph.

"Any time you're that close to reaching a final it gets exciting," Coughlin said. "The race was close but he stuck a fender out on me and that's all it took.

"I feel really energized by this result and I know the guys are feeling better. There's been no lack of effort over here with Eddie Guarnaccia and the crew but we haven't had many positive things happening for us lately, until now."

After six straight weeks of racing, the NHRA tour finally gets a few weekends off before heading to on Oct. 26-28 for the 12th annual Big O Tires NHRA Nationals.