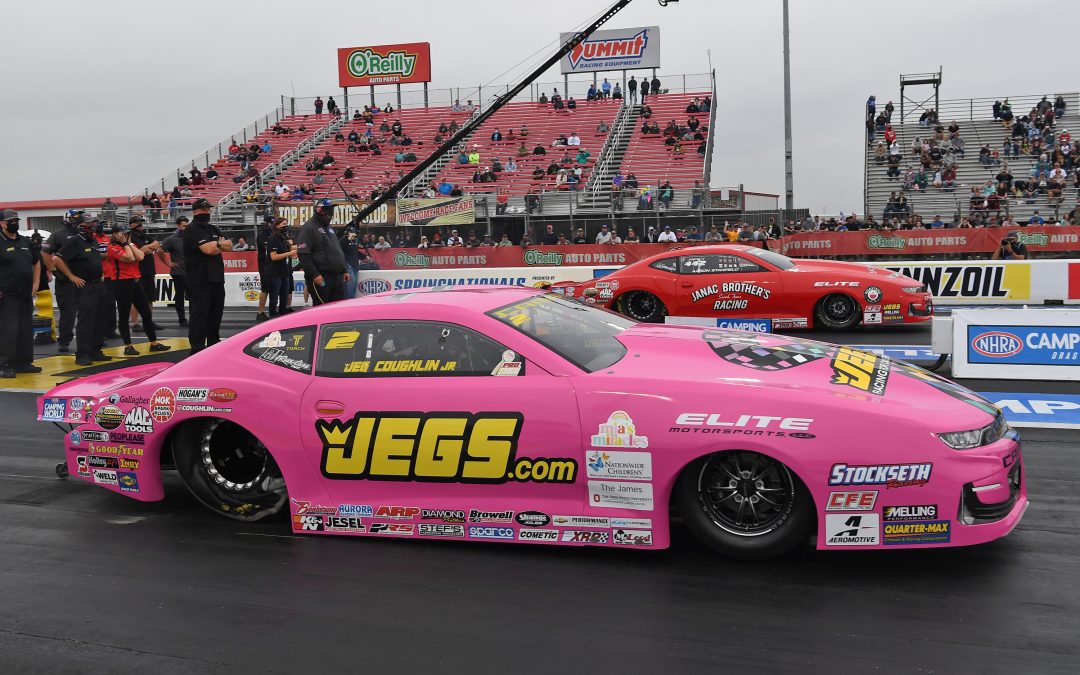 HOUSTON (Oct. 25) — A strong runner-up result at Sunday’s 33rd annual Mopar Express Lane NHRA SpringNationals presented by Pennzoil lifted five-time Pro Stock world champion Jeg Coughlin Jr. into a tie for second place with Jason Line, just 55 markers behind leader Erica Enders. There is only one race left, but since it awards points and a half, Coughlin is still very much alive in the title chase.

“We’re definitely giving it a go in these late stages of the season,” Coughlin said. “We made up some good ground today and, of course, we wanted to capitalize a little more there in the final but we had some mechanical issues that prevented us from turning on a fourth win light.”

The points could have been even better for Coughlin if he had pulled off his 66th career victory but his JEGS.com Elite Motorsports Chevrolet Camaro stalled a few times as he warmed up for a tense final-round race against Aaron Stanfield. Nevertheless, Coughlin left first on his young rival but ultimately didn’t have enough for Stanfield’s 6.535 at 211.03 mph, crossing himself in 6.611 at 207.53 mph.

“For some reason the car didn’t want to start when we were in the waterbox before the final,” Coughlin said. “Fuel injection is a little different but we finally got it to fire and I did a short burnout to at least give us a chance. I let the clutch out on time but it shutoff right away, and even though it picked back up, it kept doing that all the way down the track. Just some sort of gremlin in there we need to find.”

Coughlin’s three round wins on the day were very memorable, with miniscule holeshot victories over Greg Anderson in the semifinals and Matt Hartford in Round 1. Enders eliminated herself when she squared off with Coughlin in the quarterfinals with a -.006 red-light start. With each elimination round victory in Vegas worth 30 points, Coughlin now finds himself less than two rounds behind Enders, the reigning world champ who shares the Elite Motorsports pit with Coughlin. Entering the race he was more than four rounds back of Enders and three behind Line, who lost in Round 1 Sunday. Enders lost to Coughlin in Round 2.

“We didn’t have a moment to relax all day,” Coughlin said. “We got by with a holeshot win in Round 1 against last weekend’s winner, and then had to face Erica. I figured it would be a knock-down, drag-out affair because we always race straight-up and we go hard against one another. In the end, neither of us made great runs but she had gone just a little red so we got the ‘W.’

“The race against Greg was a true grudge match. Once again, I got a little head-start and we were glued together all the way down the track. I got the win by just a few thousands and I was actually chuckling under my helmet because Greg and I have had so many races like that in our careers. It was a relief to get by him.”

The Strip at Las Vegas Motor Speedway would seem to be the perfect place for Coughlin to rise to the occasion. He’s previously won five events at the famous facility, having earned Wally trophies there in 2000, 2001, 2002, 2008 and 2009.  “We’re gonna need a little help to win the championship, and certainly, I’m not wishing anything bad on Erica, or Jason, for that matter, but as witnessed today anything can happen,” Coughlin said. “If we have a repeat of this race we might be able to complete this dream scenario.”

Troy Coughlin Jr., Jeg Jr.’s nephew who is competing in Pro Stock for the first time this year, registered a huge upset of the higher-qualified car of Deric Kramer by posting a 6.555 at 209.26 mph to Kramer’s 6.574 at 209.98 mph. He then experienced some trouble at the starting line in a Round 2 race against Stanfield when his JEGS.com/BENMIT Elite Motorsports Ford Mustang crept through the staging lights before the green light flashed, causing him to foul out.