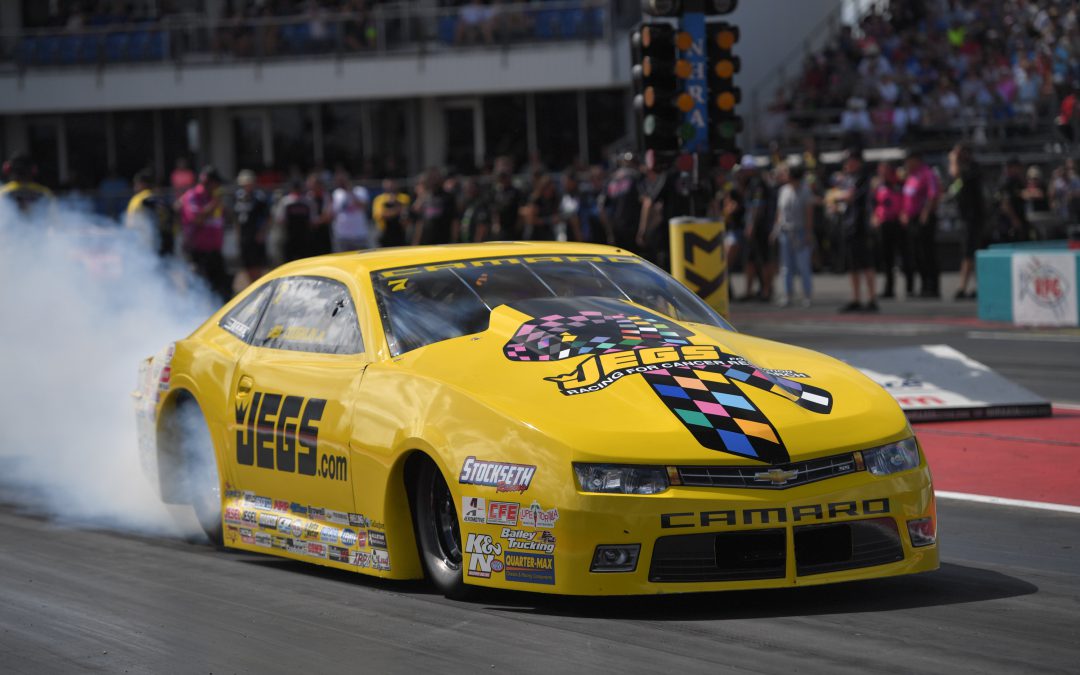 "I like the way we're trending because the only thing left to do is win, so I hope that's coming next weekend," Coughlin said.

That certainly wouldn't be a surprise because aside from points leader Tanner Gray, who edged Coughlin in Sunday's final with a 6.622 at 207.62 mph to Coughlin's 6.636 at 207.82 mph in his JEGS.com Elite Performance Chevrolet Camaro, no one has been running better in the entire class.

In fact, Coughlin's strong racecar, incredible qualifying efforts of second, first and first, and his ascending finishes in the playoffs have lifted him to a season-best third-place ranking in the Mello Yello points. The 80-time national event winner is now just one point behind second-place Vincent Nobile and 90 back of Gray.

"This entire Elite Motorsports group has really stepped up for the Countdown," Coughlin said. "Certainly, my car is in top shape, but you also see my teammate Vincent right there next to us in the points and Erica (Enders, teammate) also has been very quick.

"We would have loved to have won the race today because that would have been 20 less points for Tanner and 20 more for us, but that team did a great job and he got us in the final. I probably could have been a touch more efficient through the gears but we're still happy to have made the run we did and to finish as runner-up today."

Race day started with a pedestrian win over final qualifier Val Smeland with Coughlin cruising to a 6.624 at 207.59 mph, well ahead of Smeland's 6.754 at 205.57 mph. He then got a free pass against Drew Skillman, who fouled out at the starting line.

Against Nobile, who uses Elite Performance engines, Coughlin knew exactly what to expect but a .016-second headstart gave him the cushion he needed and he was able to inch away and win with a 6.619 at 208.17 mph ahead of Nobile's 6.634 at 207.15 mph.

"We made a real nice run down that right lane there," Coughlin said. "Rick and Rickie (Jones, crew chiefs) put a great car underneath me. It felt great to beat Vincent because he's been running so well. Plus, (Tanner) struggled right in front of us that round (with a coasting 9.699 against a red-lighting opponent), which gave us lane choice in the final but we knew we couldn't take them lightly in the final and we were right."

In just a few days, Coughlin will be back in action as the NHRA tour shifts to Charlotte for the 11th annual NHRA Carolina Nationals.