Schedule Changes to Allow Coughlin To Attempt To Make History 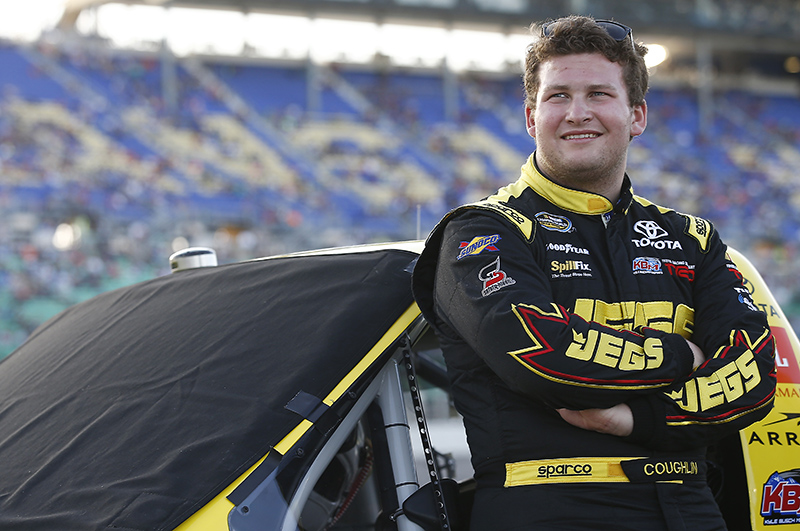 Cody Coughlin has been on a quest in 2016.  The Joe Gibbs Racing Development driver is attempting to accomplish a feat that has never been done.  Coughlin is aiming for two championships in the Champion Racing Association championship.  Due to this fact, Coughlin will be unable to compete in the NASCAR Camping World Trucks Series event for Kyle Busch Motorsports on Sunday, September 4th at Canadian Tire Motorsports Park in Ontario, Canada.

The 20-year-old has five total wins so far this year between the ARCA/CRA Super Series and JEGS/CRA All-Stars Tour, and Coughlin leads the points in both divisions.

On Labor Day Weekend, Coughlin has a double-header at the historic Winchester Speedway in Indiana.  Coughlin was originally scheduled to make his NASCAR Camping World Truck Series road course debut, but will instead be headed to the high-banks of Winchester with his KBM team cheering him on.

“We wish Cody the best of luck in his race at Winchester and his pursuit of the Late Model championships,” said his KBM crew chief, Kevin “Bono” Manion.  “I feel like we made some strides in our last race at Pocono and we look forward to continuing to improve our performance in the remaining races that he’ll be competing in this season.”

Coughlin’s first race that weekend will be the JEGS/CRA All-Stars Tour 100 that Sunday.  The 2013 champion currently holds a 103-point lead in that division.

He will then run another 100 laps the next day in his Super Late Model with the ARCA/CRA Super Series.  Coughlin has a 17-point lead that he’s looking to extend that at a track where he’s already scored a victory once before.

“I absolutely love going to Winchester Speedway,” Coughlin said.  “I hate that I have to miss a Truck race with my KBM guys, but we are so close to these championships.  I know they understand and I know they’ll be cheering us on at Winchester.  I’ll be cheering them on as they run that weekend as well.

“I’m very thankful that I have team owners that understand my drive to win these titles.  I could not be any happier driving for Kyle and Samantha and the whole KBM organization.  I’m also very thankful for my parents (Di and John) who have worked so hard to give me the opportunities that I currently have.  God has blessed me in so many ways.”

A replacement driver for Coughlin’s No. 51 JEGS.com Toyota Tundra will be announced at a later date.