Season finale ends a round too early for Jeg Coughlin Jr. 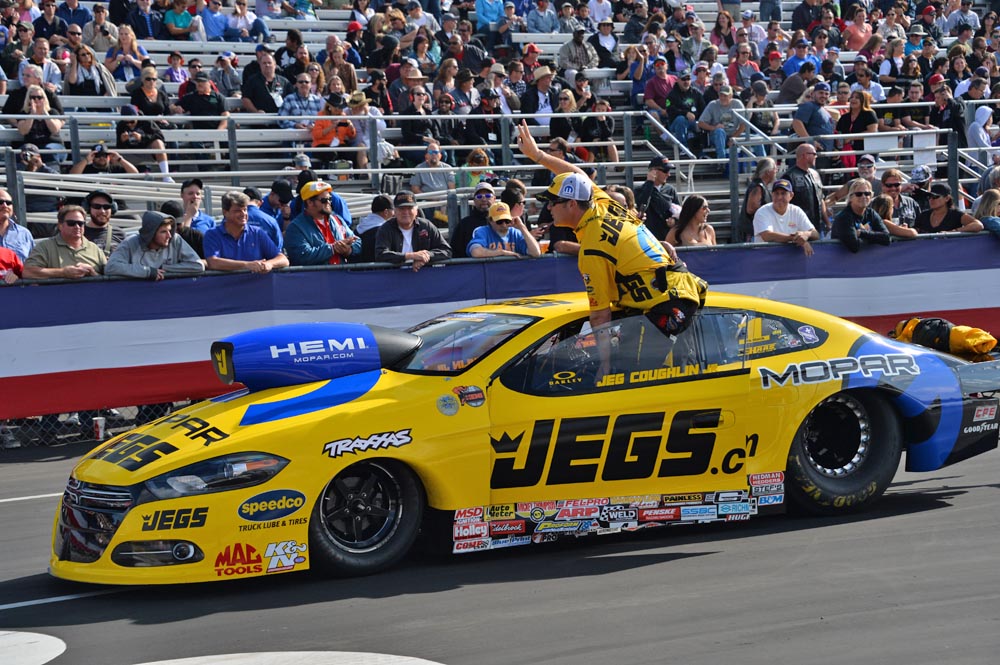 POMONA, Calif. (Nov. 16) — With the 2014 NHRA season coming to a close, six-time world champion Jeg Coughlin Jr. came up one round short of adding another Pomona final to his illustrious racing resume during the 50th annual Auto Club NHRA Finals.

As usual, Coughlin's stout semifinal run was a result of steady driving. He started the day off with a .034-second reaction time compared to Vieri Gaines' dead-late .153, which helped Coughlin advance his JEGS.com/Mopar Dodge Dart to the second round with a 6.522-second pass at 212.36 mph.

Continuing to win the battle of reaction times in the quarterfinals, Coughlin's stellar .008 to Matt Hartford's .051 resulted in a win light flashing with a 6.527-second pass at 212.73 mph.

Coughlin made a hard challenge to Jason Line in the semifinals but lost with a foul start that negated a great run, ultimately relinquishing the title of Pro Stock champion to good friend Erica Enders-Stevens, who beat Line one round later.

"We put a nice wrap on the season, although that wasn't quite the way we wanted to finish it off," Coughlin said. "We had a great car today and I felt fantastic behind the wheel. We had a big round there against Jason with a lot on the line and the championship contention between himself and Erica. He was on the wheel and got past us to keep his dream alive for another round, but Erica got it done under a lot of pressure.

"I'm real proud of (Enders' team owner) Richard Freeman, Erica, and that entire team. They traversed through quite a season, you know, by taking a couple races off and having very limited testing. They just showed us a different way to do it, I guess, and I'm real happy for them."

Heading into the semifinal round knowing another killer light could seal his fate to a final-round bid, Coughlin let up on the clutch pedal .023-second early, lighting the red bulb and sending Line to the final round.

"I wanted to ride off into the sunset with another big win here in Pomona," Coughlin said. "It's one of my favorite tracks. We've had just phenomenal success here.

"It was just a little mental blip on the starting line that cost me. An old buddy of mine told me that you just have to pay attention for a minute. I guess I just wasn't focused when I needed to be."

Having a year almost identical to his 2013 championship-winning season, Coughlin chalks it up to the timing of his performance.

"Last year we peaked more in the Countdown, and this year we never really got any kind of momentum going in these last six races," Coughlin said. "That was a big hurt for us. We struggled in that effort and others didn't. The bottom line was we weren't up to defending our championship title, and a great team won it."