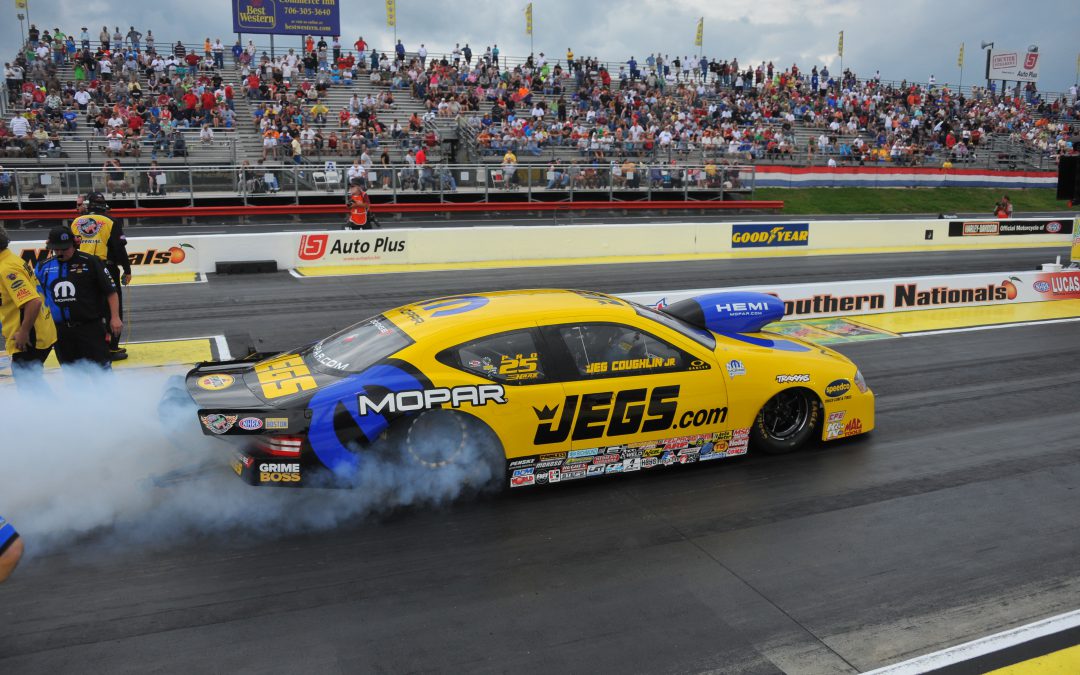 TOPEKA, Kan. (May 14) – One of the benefits Jeg Coughlin Jr. was hoping to gain through his alliance with defending Pro Stock champ Allen Johnson this season was to be behind the wheel of a consistent race car, and he has certainly acquired that so far this season.

Coughlin has indeed been stellar on race day with his JEGS.com/Mopar Dodge Avenger, reaching two final rounds and posting three semifinal finishes through the first seven events of the NHRA Mello Yello Drag Racing Series season, including final-four finishes at the two most recent stops in Houston and Atlanta.

And despite having yet to score a victory this year, he enters this weekend’s NHRA Kansas Nationals at Heartland Park Topeka in second place in the Pro Stock national standings thanks to his reliable race car, trailing only past champion Mike Edwards and just slightly ahead of teammate Johnson, both of whom have won twice this season.

Coughlin knows that if the team continues on its current path, trips to victory lane will come.

"We’re just looking to continue our pace and run well on Fridays and Saturdays to qualify in a good position," he said. "If we do that and continue to challenge for round-wins on race day, we’ll eventually get an event win on Sunday."

The four-time Pro Stock national champ has qualified no worse than sixth this season and entered eliminations either No. 1 or No. 2 on the ladder at the last three events.

Now Coughlin is looking to again rely on his consistent car to put on a show for fans in Topeka and score the 53rd national event win of his Pro Stock career. He has scored once before at Heartland Park Topeka, in 2000, after reaching the final in 1998.

"It’s a fun stop in the Midwest," Coughlin said. "It’s a different fan base that loves their drag racing all day long, which is fun. It’s not uncommon to have the stands near packed for the duration.

"The fans are there for the action. The teams recognize it and feed off that energy."

Qualifying at the NHRA Kansas Nationals gets under way at 5 p.m. CDT on Friday from Heartland Park Topeka. Qualifying continues Saturday at 12:15 p.m. with Sunday's eliminations starting at 11 a.m. ESPN2 will air the qualifying show at 5:30 p.m. EDT Saturday and the eliminations show at 8 p.m. Sunday.