Second-ranked Troy Coughlin Jr. interested in firsts, from the past and the future 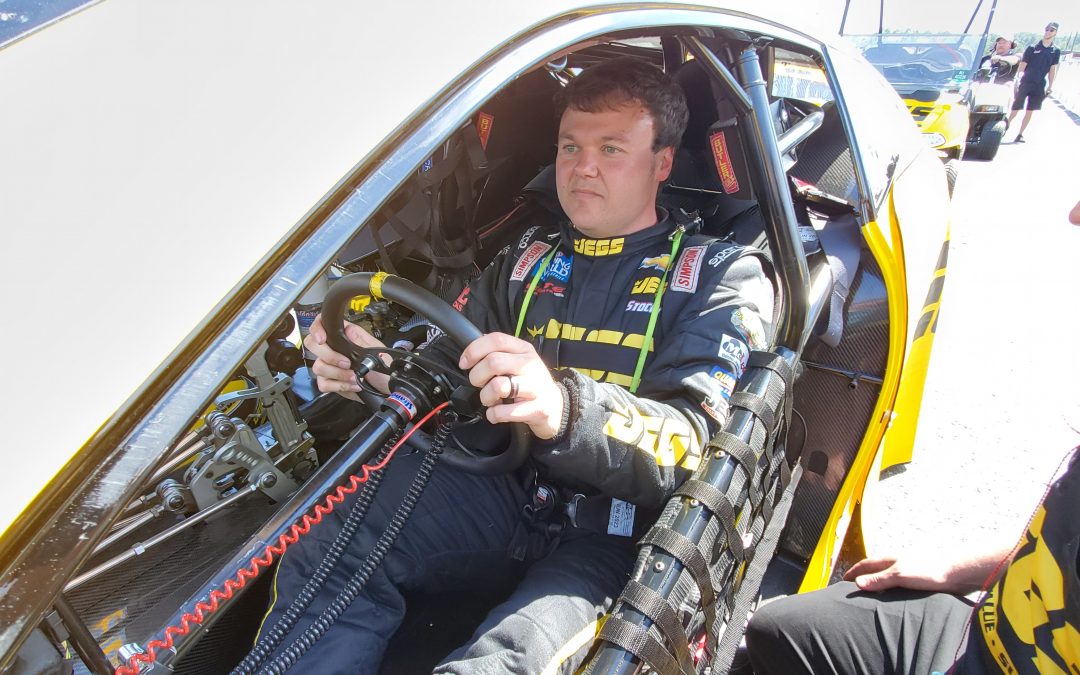 LAS VEGAS (April 13) — After a dazzling runner-up finish at the NHRA season-opener one month ago in Florida, second-ranked Pro Stock driver Troy Coughlin Jr. arrives at The Strip at Las Vegas Motor Speedway for this weekend’s Denso Spark Plugs NHRA Four-Wide Nationals looking for some firsts, while reminiscing on another “first” he accomplished at this track in 2009.

It was 12 years ago when a 19-year-old Coughlin earned his first national event title in Las Vegas, driving the JEGS.com dragster to victory in Super Comp. Now he’s back as the driver of the JEGS.com Elite Motorsports Chevrolet Camaro looking for both his first Pro Stock win, his first time ranked No. 1 in any professional class — which a victory would deliver — while competing in his first four-wide drag race in the factory hot rod category. 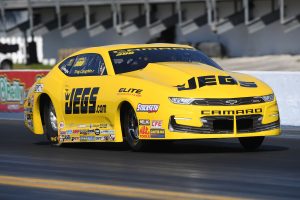 Troy Coughlin Jr. and team is headed to Vegas for the first 4-wide event of the year sitting in second on the points.

“We are tuned-up and ready to roll,” Coughlin said. “Luck was on our side in Gainesville and we gained a lot of momentum by starting so well. There is no limit to what we can accomplish and there’s plenty of goals to set our sights on this weekend in Las Vegas.

“I certainly remember that win in 2009. I was pretty much in shock and could barely talk when I got interviewed at the top end. I’m still a person that keeps everything inside. I celebrate in my mind and heart. I know I don’t show much outward emotion, but believe me I’m excited when we do well. I just don’t have the perfect thing to say come to mind right away like my uncles. They’re all so smooth on camera. I’m just different.”

Whether he pulls off a cartwheel or two in the winner’s circle this weekend or just politely takes the trophy and shares it with his teammates as has become his norm, Coughlin knows the effort his crew at Elite Motorsports puts in to make him fast.

“It’s incredible to me to see the amount of work the guys do every day to make these cars quicker,” Coughlin said. “I remember when we had our own program at JEGS and I’d get to work at 7 a.m. and the guys were already there working on the motor and the chassis and then at 7 p.m. when I was leaving they’d still be right there grinding away. These guys are exactly the same way. Their dedication is unmatched but it’s what it takes to win all the world championships they’ve collected.

“I’m doing everything I can to rise to their level of intensity. While they’re making music in the dyno room, I’m constantly watching film of our runs and analyzing data. I’ll hit the practice tree for hours and make runs in my head over and over. I always see ways I can improve and I think it should always be that way. There is no ceiling for knowledge.” 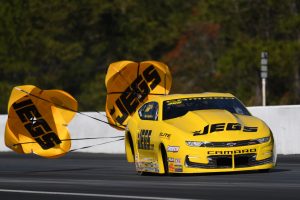 Troy Coughlin Jr pulls the chutes in the JEGS.com Camaro

“We all enjoyed the extra time we’ve had between races but we’re anxious to get back after it this weekend,” Coughlin said.