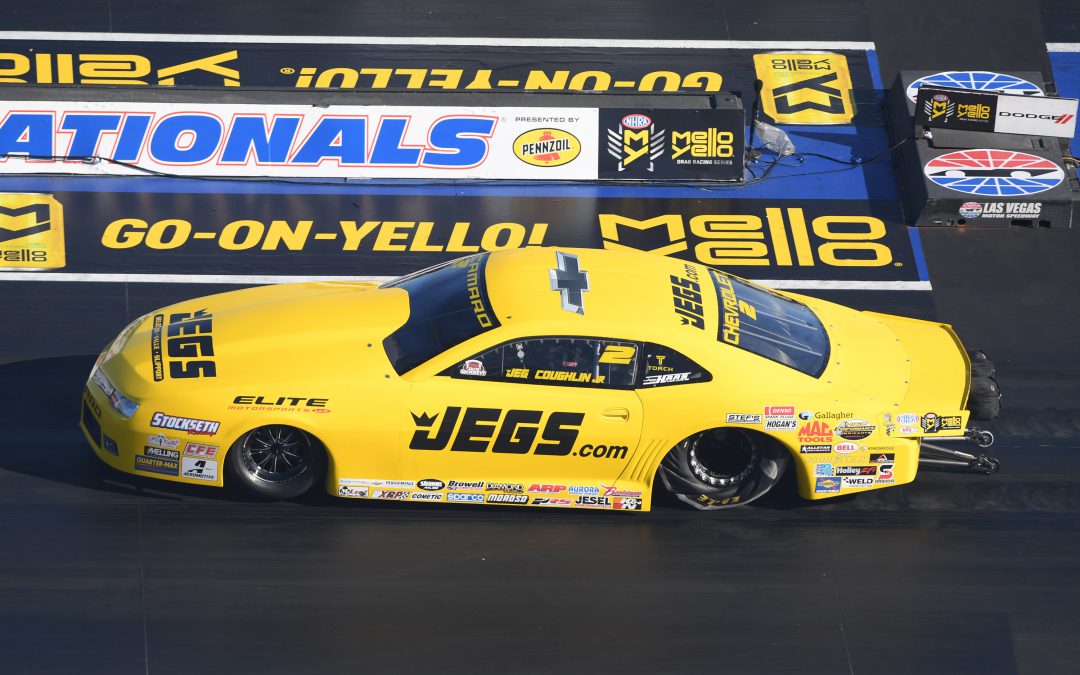 LAS VEGAS (Nov. 3) — A second consecutive runner-up finish for five-time Pro Stock champion Jeg Coughlin Jr. lifted him from third to second place in the Countdown to the Championship rankings with just one race left on the NHRA schedule. Although great progress was made this weekend, the fact Coughlin's teammate — current points leader — Erica Enders beat him in the final means he actually drifted back to 92 points off the lead, a difference of -27 points from where he stood before the race.

"It was almost a perfect day," Coughlin said. "The guys gave me a great car and we were having fun. Everything was falling into place and round-by-round we were gaining more confidence. Quite honestly, I fell off a bit with my reaction times in the last two rounds (posting a .043 against Jason Line and a .062 opposite Enders) and ultimately that cost us the trophy.

"Erica made her best run of the day when it mattered most and I made my worse with an off-pace reaction-time but I don't want to take anything away from her or that team. They did a helluva job all weekend, and really they have since the playoffs started. They deserve everything they've got."

The race against Enders was a thriller with the two multi-time world champions zipping down The Strip at Las Vegas Motor Speedway in front of a wildly enthusiastic crowd. Proving she's earned the points lead, Enders left first and tripped the final timer first in a close, but ultimately winning end-to-end victory march, her 6.617 at 208.04 mph enough to beat Coughlin's 6.620 at 201.70 mph.

"I knew pretty early on in the run that the advantage she left with was going to be hard to make up," Coughlin said. "That turned out to be true and ol' red just pulled away and took the stripe first."

"We have had such a great run in the five playoff races so far and even though the mountain we have to climb got considerably taller today with the final-round result, we are still alive," Coughlin said. "There's no quit in this group and if the opportunity presents itself in Pomona, we'll fight like hell to make some magic happen."

Now Coughlin has two weeks to figure out how to make up the deficit to Enders when they all race for the final time this year at the 55th annual Auto Club NHRA Finals in Pomona, Calif. Two things that may help Coughlin is the fact the season-ending event awards points and a half for each round win, and that he's won at Auto Club Raceway six different times in the past, including three times at the fall event.