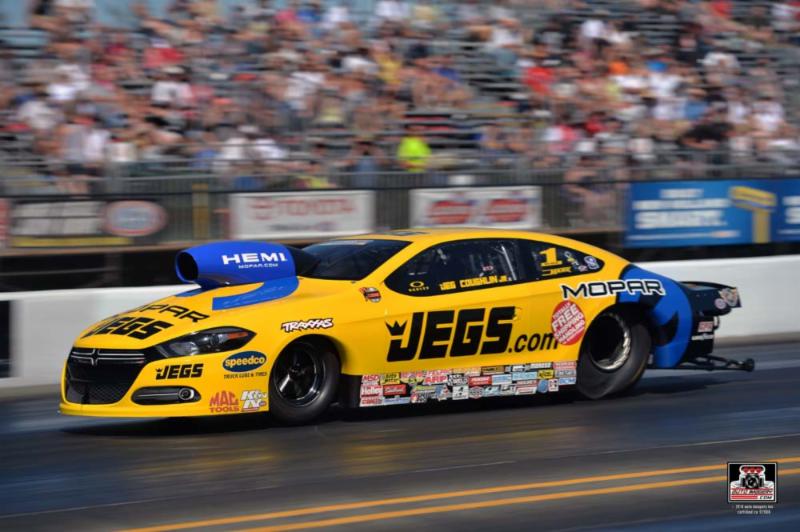 Coughlin drove his JEGS.com/Mopar Dodge Dart to victories against Deric Kramer and four-time world champion Greg Anderson before bowing to veteran Vieri Gaines when Coughlin's car got squirrelly a few hundred feet into his run. [http://ih.constantcontact.com/fs195/1110439661844/img/1450.jpg]

"It wasn't a bad weekend at all; actually it was a very good weekend," Coughlin said. " We made it to the semifinals, which was better than a bunch of the others here. Qualifying went well in all but one session and it was more of the same today, so we continue to feel like we have a great race car."

Coughlin gave up a sizable starting-line advantage to Kramer, but his J&J Racing horsepower made up the deficit and delivered Coughlin a 6.527 win at 212.16 mph against Kramer's 6.597 at 210.31 mph.

In the quarterfinals against Anderson, Coughlin was first off the line and stayed just ahead of his friendly rival all the way down the quarter-mile, posting a 6.558 at 212.23 mph to Anderson's 6.563 at 211.73 mph, a margin of victory of just .007-second.

"We came out ready to roll with a nice 6.52 in the first round to stay in front of Deric Kramer, who gave us quite a challenge," said Coughlin, a 58-time winner in Pro Stock. "We came back and had a big matchup with Greg Anderson and stayed in front of him as well by just a few thousandths of a second."

Coughlin crushed Gaines at the starting line, leaving in .017-second to Gaines' .085-second launch, but for some reason the car went sideways just past the launch pad and Coughlin did well to keep it from wrecking. The miscue allowed Gaines to cruise by and take the win with a 6.556 at 211.89 mph, with Coughlin crossing in 6.790 seconds at 187.44 mph.

"Fortunately (Jason) Line didn't have any problems going down the same lane after us, which let us know we were just a little off. If we can take this result and turn it into something even more positive as we trek down the road and into the Countdown, then that's going to win us rounds, win us races, and hopefully another championship."

The tour immediately heads to Seattle for next weekend's event at Pacific Raceways.

JEGS.com/Mopar Pro Stock driver Jeg Coughlin Jr. secured his spot in the NHRA playoffs after reaching the semifinals at the NHRA Sonoma Nationals.