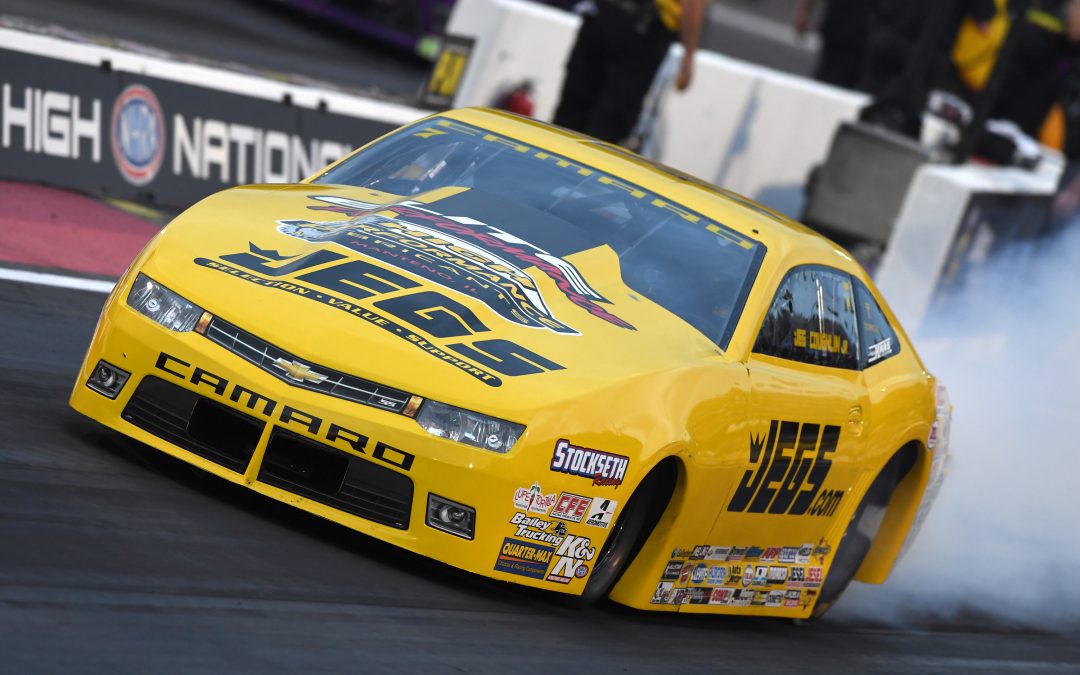 Coughlin's semifinal run at Bandimere Speedway included a thrilling holeshot win over the higher qualified car of Drew Skillman and an end-to-end job on Tanner Gray. He then gave points leader Greg Anderson as much as he could handle, ultimately getting nipped at the top end by .01 seconds.

"Once we got through the first two rounds the day started having that feeling like we might be able to pull a rabbit out of the hat," Coughlin said, "but we are still very pleased with a semifinal finish. It's a good, solid start to the Western Swing. We gained some points over a few of our rivals so we're happy."

After qualifying 11th overall, Coughlin ceded lane choice to Skillman in Round 1 but a lightning-quick reaction time gave him a .024-second edge at the starting line and his JEGS.com/Elite Performance Chevrolet Camaro was able to hold off a hard-charging Skillman and win by .009 seconds, or about nine inches. Coughlin's 6.991 at 196.04 mph beat Skillman's quicker-but-losing 6.969 at 196.93 mph.

Gray was next and Coughlin once again had a great light, leaving .015 seconds ahead of his counterpart. The two cars stayed locked in that position all the way down the track with Coughlin's 6.994 at 195.87 mph doing the job against Gray's 6.996 at 196.27 mph.

"I drove pretty well today," Coughlin said. "That always feels good. The car was running decent, really all weekend, so no complaints at all, but I don't think we ever really had a firm grip on it. We felt a bit behind the curve, to be honest, so to make it down to the final four cars is a good result. If we had dealt a little better with the cloud cover that rolled in before the semis we may have had an even better weekend.

"Hats off to these fans at Bandimere and the Bandimere family themselves for another great
Denver race."

Coughlin and crew will quickly turn their focus to next weekend's 31st annual Toyota NHRA Sonoma Nationals in the heart of Northern California's Wine Country.

"At the last race before Denver, Erica (Enders, Elite teammate) started using a new motor the guys back at the shop built for her and it showed tremendous gains," Coughlin said. "She went to the finals with it. They've been working on a second one for me and we hope to have it between the rails in Sonoma, so that's very exciting.

"We've won two Pro Stock races this year (Chicago and Bristol) in this JEGS Chevy and we're ready to win some more. We've gained lots of momentum this summer and we have a good taste in our mouths. I know we're all anxious to get back to sea level and friendlier atmospheric conditions and barometer readings like we'll have in Sonoma. I wouldn't mind running some 6.40s and 6.50s again."