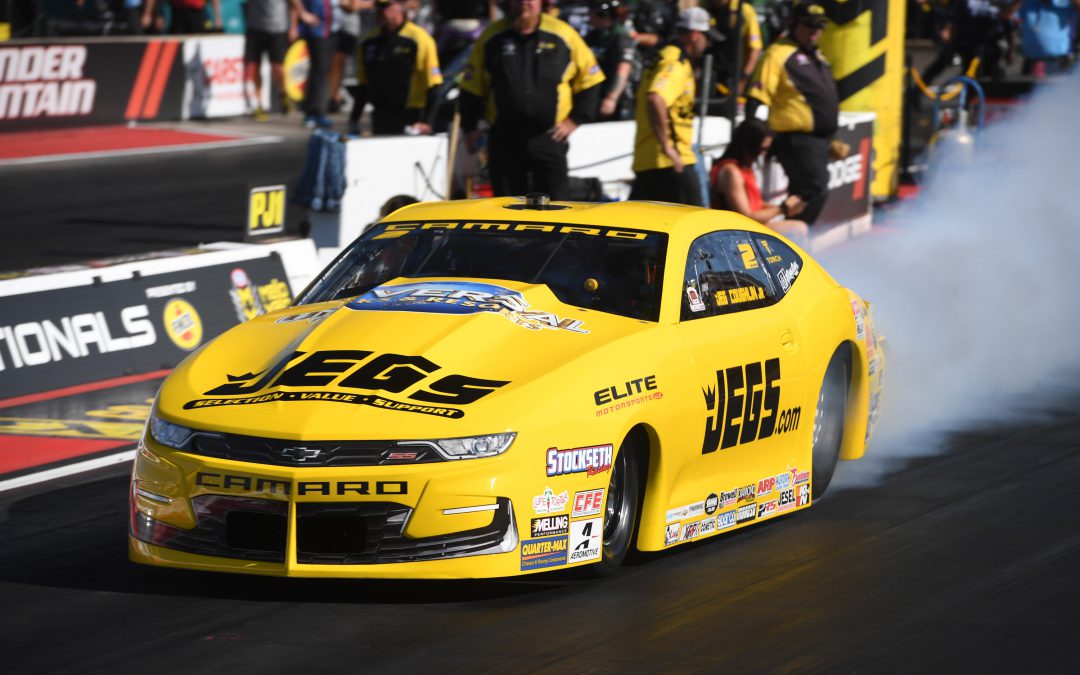 DENVER (July 21) — Jeg Coughlin Jr.'s third semifinal finish of the 2019 season, which occurred Sunday at the 40th annual Dodge Mile-High NHRA Nationals at Bandimere Speedway, has lifted the five-time Pro Stock champion and his JEGS.com Elite Motorsports crew to within a round of the elite top-five points earners in the class.

Coughlin beat Fernando Cuadra Jr. and teammate Erica Enders in the first two rounds before dropping a close race to Matt Hartford in the semis. In doing so, Coughlin leap-frogged Enders in the Mello Yello championship standings into seventh place and now sits just 19 points behind fifth-place Jason Line. A single round of eliminations is worth 20 points.

"Historically speaking, the Western Swing is a great time to collect points and position yourself as best as possible for the upcoming Countdown to the Championship," Coughlin said. "So, although we didn't achieve our ultimate goal today, we did check off a few things we wanted to do and gaining a spot in the points and closing in on the top five just adds to the good weekend we've had.

"Aside from the No. 1 spot, which is a pretty good ways out there, the rest of us in the Pro Stock top 10 are pretty tight so the moves we can make now before the playoffs start will make a big difference."

In just their second head-to-head race, rookie Cuadra Jr. made the fatal mistake of allowing Coughlin to get a .026-second jump at the starting line. All the newcomer could do was watch at that point as Coughlin pulled away for the win with a 6.972 at 197.10 mph to Cuadra Jr.'s 6.999 at 197.08 mph.

Horsepower ruled when Coughlin raced Enders in the quarterfinals as an early lead by Enders was quickly erased when Coughlin caught and passed his good friend and soared away for the win, crossing the top-end timers in 6.963 at 197.02 mph to Enders' 7.025 at 197.25 mph.

Knowing he needed to be sharp against a starting-line expert like Coughlin, semifinal foe Hartford pulled off his best light of the day by far and was able to eke out a holeshot win, 6.977 at 196.10 mph to Coughlin's quicker but losing 6.974 at 197.39 mph.

"We made good runs both personally and car-wise with the decisions we were making this weekend and I expect this positive momentum to continue," Coughlin said. "I'm proud of my guys and the entire Elite Performance group."

There's little time for Coughlin and crew to rest as the 32nd annual Sonoma NHRA Nationals begin Friday at Sonoma Raceway in Northern California. Coughlin will be racing alongside his brother Mike Coughlin, who has shot to the top of the Division 3 rankings with back-to-back wins in Indy and Chicago. The brothers will be joined by Jeg Jr.'s son Jeg III and Mike's boys Clay and Jack.

"Sonoma always is a great stop on the schedule," Coughlin said. "Mike will be there and I'm excited to cheer him on in Top Dragster. He's been on a heckuva run the last four races, logging a couple of big wins, and I'd love to see him win one in person. It would be awesome to meet him in the Winner's Circle. It's been a long time since we both won the same race and I'd love to have that experience again."