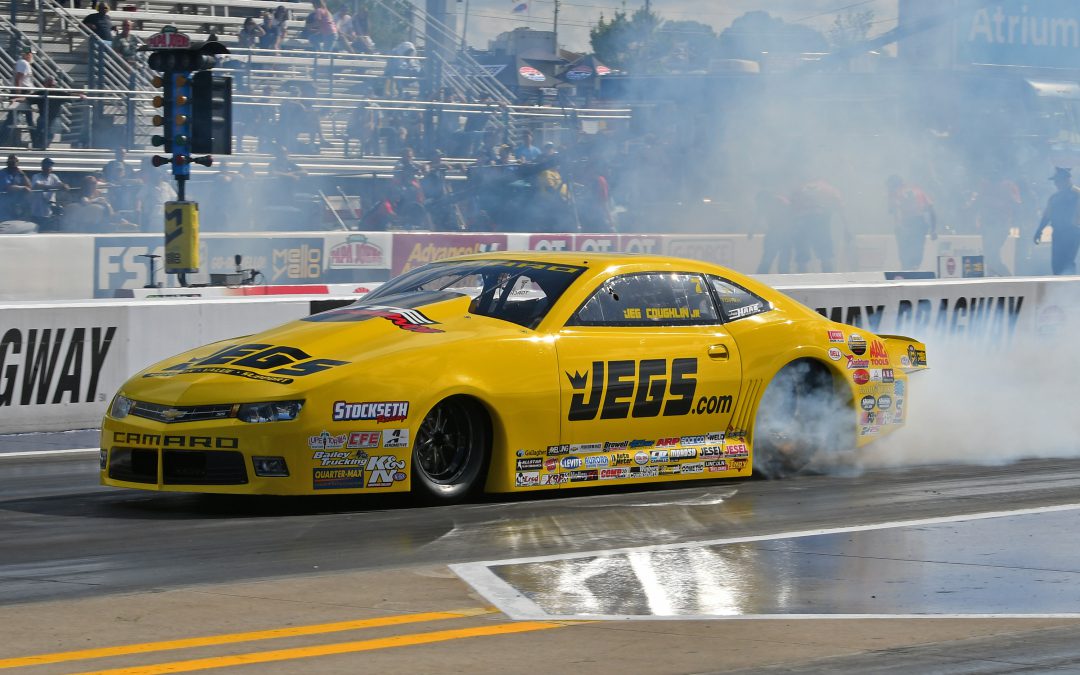 CHARLOTTE (April 29) — For the second race in a row, six-time world champion Jeg Coughlin Jr. raced his JEGS.com/Elite Performance Chevrolet Camaro to a top-half qualifying effort and a semifinal finish, signaling a continued change of fortune for the 76-time national event winner.

"It was a good weekend for us," Jeg Jr. said. "Just like Houston, we had a top-five car every round so we're certainly pleased to have a competitive racecar again. And for the second weekend in a row, one of my Elite Performance teammates won the race so things are certainly on a big upswing. It's an exciting time."

After qualifying sixth overall with a 6.558-second pass at 210.90 mph, Jeg Jr. roared to life on race day of the unique four-wide race, winning his opening-round quad with his best run of the weekend, a 6.515 at 212.66 mph. Teammate Vincent Nobile was second with a 6.513 at 212.16 mph, while last week's winner Matt Hartford spun his tires and coasted to the finish, drifting alongside Alan Prusiensky.

"Having two other Elite-powered cars in Round 1, we knew we'd have our hands full right from the start," Jeg Jr. said. "The guys did a great job setting up the JEGS Camaro and we had a really strong run. We just kind of fine-tuned from there for the next session."

In a semifinal quad of drivers that ended with all four drivers posting 6.54-second passes, Coughlin slipped to third place by a fraction of a second, watching Chris McGaha and Nobile advance to the final.

"We just spun a little in second and third gear and that very slight loss of momentum was enough to knock us out," Jeg Jr. said. "We needed .008 of a second more to get to the finals but instead we'll have to wait until next weekend in Atlanta and try again, and we'll go there with smiles on our faces."

"Rich (McPhillips) and the boys have this car running so well I'm positive we could run down a dirt road," Troy Jr. said. "We just needed a little more against Megan but we are making serious progress. I'm not satisfied with my rhythm on the Christmas Tree just yet. I'd really like to pick my reaction times up a bit. For now, it's on to Atlanta to make more laps and drive closer to our goals."

Troy Jr. also raced in Super Comp this weekend, where like his sister Paige, who was making her national event debut, he lost in Round 1 due to a red-light start.

Back home in Columbus, Clay, the son of Jeg Jr.'s brother Mike Coughlin, recorded second-round finishes on both Saturday and Sunday in his first Junior Dragster meet of the season.