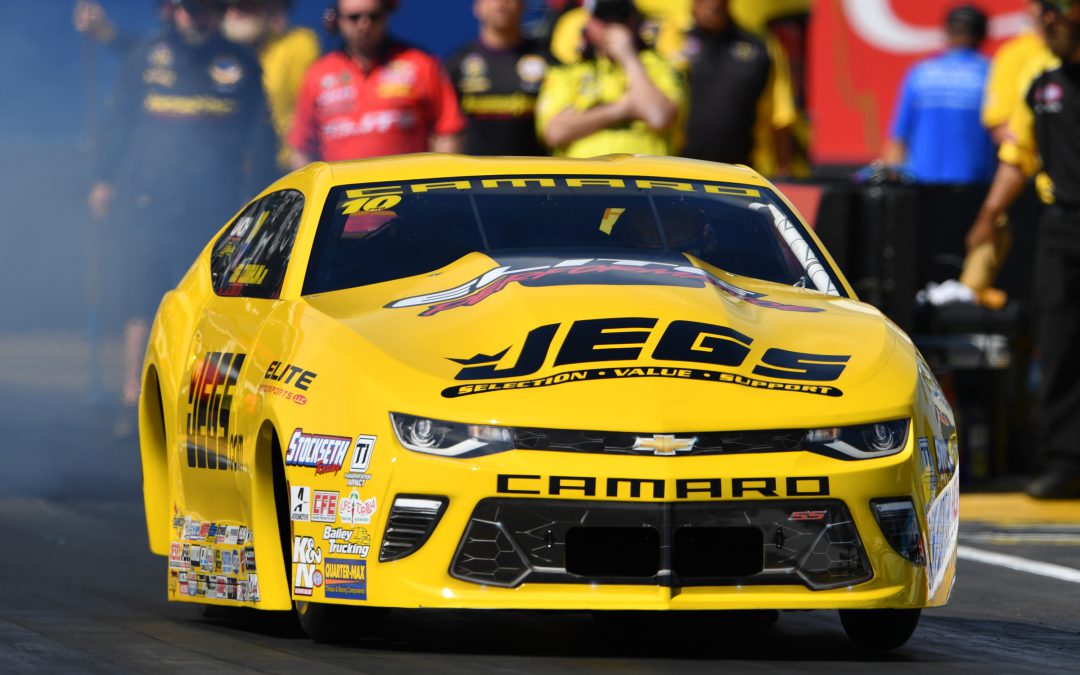 Coughlin matched up against Drew Skillman in the penultimate round. The two drivers put on a great show for the huge crowd at Wild Horse Pass, but Skillman was able to use a small holeshot to edge Coughlin at the finish line by a scant .019 seconds, 6.581, 210.28 to 6.582, 210.05.

After struggling last season to get a winning combination of power and pipes, Coughlin has started this season with a setup of performance and chassis that is showing more and more promise each time his bright yellow racer blasts down the quarter-mile.

"We made just a so-so run in the semis against Drew. We felt like we could probably go out there and run a .56 and just left a couple behind there and then obviously left 2 (hundredths) behind on the starting line. We will certainly not hang our heads a bit."

Coughlin, one of the most dominant racers in NHRA history, has 76 national event victories in 383 events, so he's no stranger to momentum shifts and the ebbs and flows that accompany competing in NHRA's most competitive class.

"We’ve got some good momentum going within the team here that I think is going to earn us some momentum out on the racetrack as we come down the season opening stretch and head into Gainesville (next event), one of my favorite races of the year," Coughlin said.

"We’ll likely make some laps prior to Gainesville. I’ll see if I can’t hop behind the wheel myself, too, and see if we can’t tune up some things there."

Rookie Troy Coughlin Jr., driver of the SealMaster Toyota Top Fuel dragster fielded by Kalitta Motorsports and Jeg's nephew, was also in action for the legendary Coughlin family in Phoenix.

"You know, we are making progress," Troy Jr. said. "I really believe that mentally the strings are loosening as far as the hesitations in this thing. I’m getting more and more comfortable so we’re just going to roll along to Gainesville.

"Connie’s (Kalitta, team owner and drag racing legend) coming to Gainesville so we’re going to have a little bit more mojo. Everybody did an awesome job and I really appreciate all of the SealMaster Toyota guys for what they are watching me go through. They’re not rookies at this, I am, and I really appreciate the fact that they can have such a good attitude. I couldn’t do it without them."

Jeg Jr. and Troy Jr. will compete next at the famed Gatornationals at Gainesville Raceway, March 16-19.