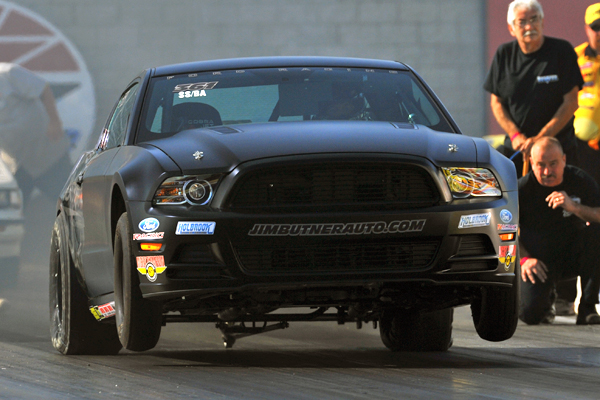 DePalma, who doubled up at the JEGS Allstars race and the O’Reilly Route 66 Nationals earlier this season, drove his ’89 Trans Am to a 9.003 (-.667 under the index) to take the provisional pole in Comp. DePalma leads Clint Sallee and Tom Mettler, who was runner-up at the inaugural JEGS Pacific SPORTSnationals in 2006.

Butner, who enjoyed one of the best weekends of his career last October in Las Vegas when he scored a double win in Super Stock and Stock, leads a strong field of contenders in the Super Stock class with his new ’13 Cobra Jet Mustang. Butner, who is also a former winner of the JEGS Northern SPORTSnationals, ran a 9.083 (-.987 under the index) to lead the field.

Hagberg’s vintage ’64 Plymouth sedan is one of the oldest cars in the Stock Eliminator field but it is also one of the most competitive as he has a hold on the top spot after day one with a 10.133 (1.057 under the index). Hagberg is followed by a couple of other vintage muscle cars as Robert Pond is second with his ’67 Ford Fairlane and Paul Wong is third in his ’65 Plymouth.

The Top Dragster field features a large number of six-second race cars but thus far, no one has run quicker than Adams, who enjoys a comfortable lead following his 6.128 pass on Friday. Adams, who also has top speed of the event at over 223-mph, leads No. 2 qualifier Lyle Burnham by nearly three-tenths of a second.

The Sportsman Motorcycle class presented by Harley-Davidson uses a unique qualifying format where the field is set according to reaction times and after day one; it will take a perfect run to knock Burkart from the top spot after his .001 reaction time. Tom Medlin is second with a .002.

In addition to the top qualifiers, three drivers to watch this weekend are Super Street racers Ray Dew and Donnie Durenberger and Super Gas driver Ryan Herem. Each of them has won one of the JEGS SPORTSnationals earlier this year and is eligible for the coveted JEGS Crown which they will take home if any of them can duplicate the feat this weekend.