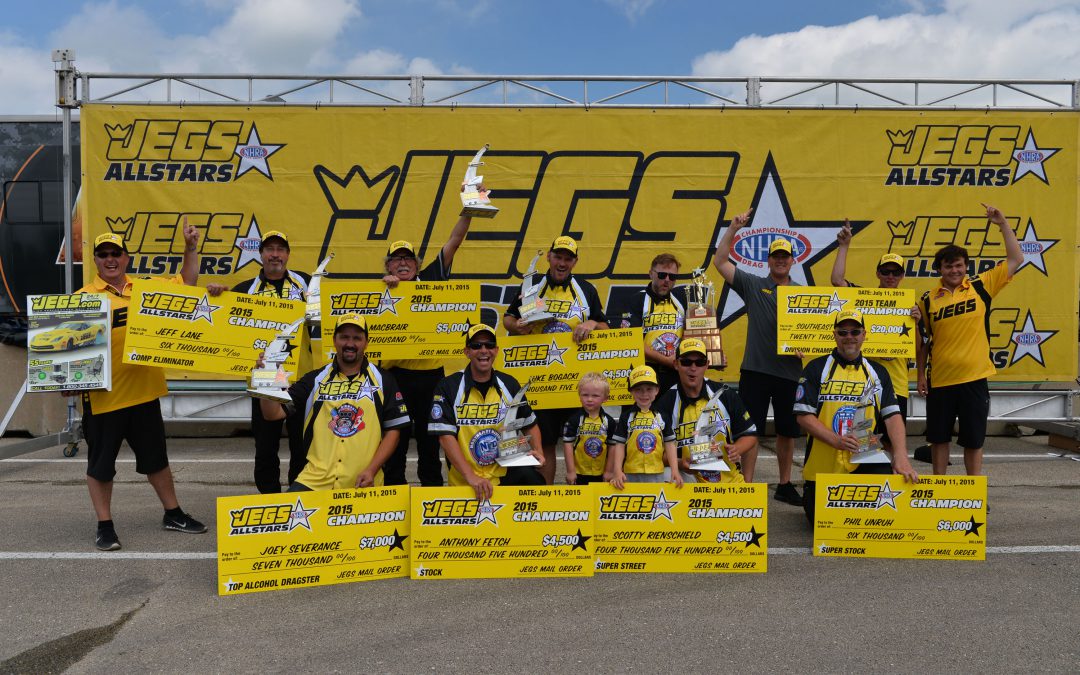 JOLIET, Ill. (July 12) – It took the final round of the final category to declare a winner but when the smoke cleared from the 31st annual JEGS Allstars race, the team from the NHRA Southeast Division (Division 2) claimed its seventh overall team title in the prestigious event. The Division 2 team was led by Kevin Brannon and Jeffrey Barker, who claimed wins in Super Comp and Top Sportsman, respectively. The team also enjoyed a strong outing from Jeff Strickland, who earned a runner-up finish in Stock.

The Southeast Division team has now won the overall team title seven times, tying the teams from the North Central and North East Divisions for most championships in the historic event.

The epic points battle came down to the Top Dragster final. Chris Carrico had a chance to win the title outright for the Division 3 team but his far suffered a mechanical problem just off the starting line and the win went to Pacific Division racer Michael MacBrair. Watching the race from the starting line, the Division 2 team, led by NHRA Southeast Division Director Rich Schaeffer, erupted in a joyous victory celebration. In the final points tally, the Division 2 team finished with 1,100 points, the same number earned by the North Central Division (Division 3) team. The final outcome was decided via a tiebreaker, which is based on a progressive round-win total. The members of the Division 2 team split a $20,000 bonus from JEGS Mail Order.

The alcohol portion of the JEGS Allstars was also a tight finish with the Central Region claiming the top spot via a tire breaker over the West Region. Joey Severance of the West Region won the Top Alcohol Dragster title when he defeated East Region racer Duane Shields in the final round. Reigning JEGS Allstars champ John Lombardo Jr., of the Central Region, successfully defended his title when he stopped West Region racer Annie Whiteley in the final round.

The final rounds of the JEGS Allstars were delayed by rain until Sunday and were run in conjunction with the Lucas Oil NHRA Route 66 Nationals. Division 6 racer Jeff Lane scored the Comp title when he stopped defending event winner Greg Kamplain, who returned as a blocker for the Division 3 squad.

Phil Unruh, of Division 5, topped Division 6 racer in Sean Cour in the Super Stock final. Last year, Unruh was the Top Dragster winner in the JEGS Allstars. On Sunday, Unruh collected the JEGS double-up bonus when he drove his Special Metals Cobalt to the Route 66 Nationals Super Stock title. In the Stock final, Anthony Fetch scored the lone win for the Division 1 team when he defeated Strickland’s COPO Camaro.

Brannon, the current Lucas Oil points leader in Super Comp, drove to an 8.92 to 8.93 win in the final round against Division 2 blocker, and reigning JEGS Allstars champ Ray Miller III. The Division 3 team got a boost from Super Gas winner Luke Bogacki, who defeated Division 7 racer Marko Perivolaris in a double-breakout final. Bogacki is the reigning national champion in Super Gas. The host team from Division 3 also got a strong performance from Super Street champion Scotty Rienschield, who claimed the title after Division 4 racer Don Snow broke on the starting line.

Barker’s Top Sportsman win came at the expense of Division 3 racer Lester Johnson. Barker, who is also the current Top Sportsman points leader, drove his Chevy Cobalt to a perfect 6.65 on his 6.65 dial-in to seal the victory. Barker, and the rest of the JEGS Allstars champions, have earned the right to return to next year’s event to participate as blockers.

*won title on a tie-breaker