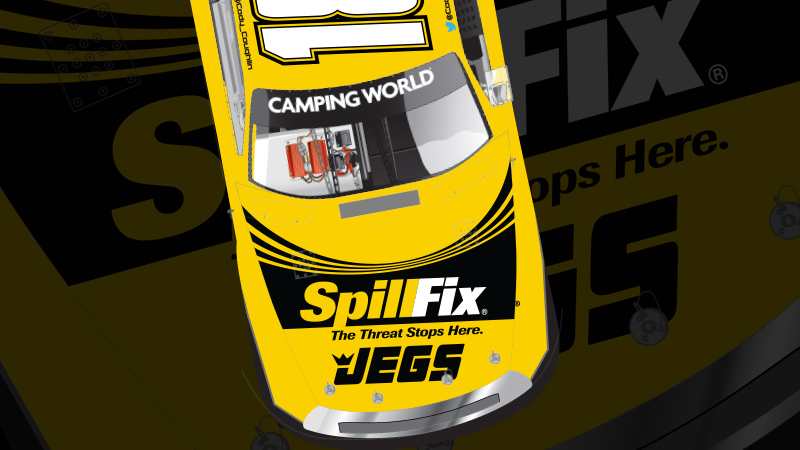 Cody Coughlin and Kyle Busch Motorsports have teamed up with SpillFix for the season-opening NextEra Energy Resources 250 NASCAR Camping World Truck Series event at the Daytona International Speedway.  SpillFix will serve as the co-primary sponsor on the No. 18 Toyota Tundra along with JEGS.com for the Friday night, February 19 race at the big track.

“I’m really looking forward to starting a partnership with a company that is so passionate about what they do,” said Coughlin, who started on the front-row and finished in the top-five in the ARCA race last year at Daytona.  “That passion really shows in the quality of their product.  It’s an honor to represent them at our biggest race at Daytona.”

“I know it’s not Christmas, but it sure feels that way,” said Joe Davids, President, American Green Ventures (parent company for SpillFix).    This inaugural race is just the beginning of a long and productive relationship with Cody Coughlin and Kyle Busch Motorsports.  This is a big win for SpillFix.  We’re excited about watching Cody Coughlin’s victories grow as the year progresses.”

SpillFix is an industrial organic absorbent that absorbs spills completely and immediately without damaging floors or equipment and without leaving behind harmful, carcinogens or dust. SpillFix was awarded “New Product of the Year” by the Occupational Health & Safety Magazine for 2015.

To learn more about SpillFix, a revolutionary new product in hazmat safety, visit www.spillfix.com, or Like SpillFix on Facebook.

Coughlin joins Kyle Busch Motorsports after making two NASCAR Camping World Truck Series starts in 2015, one for KBM.  He competed part-time in the ARCA Racing Series last year with a best finish of second (Talladega Superspeedway, AL) and two pole awards.  Coughlin is also a winner in Late Model competition at tracks such as Winchester Speedway (IN) and New Smyrna Speedway (FL) and is a former champion of the CRA / JEGS All-Stars Tour.