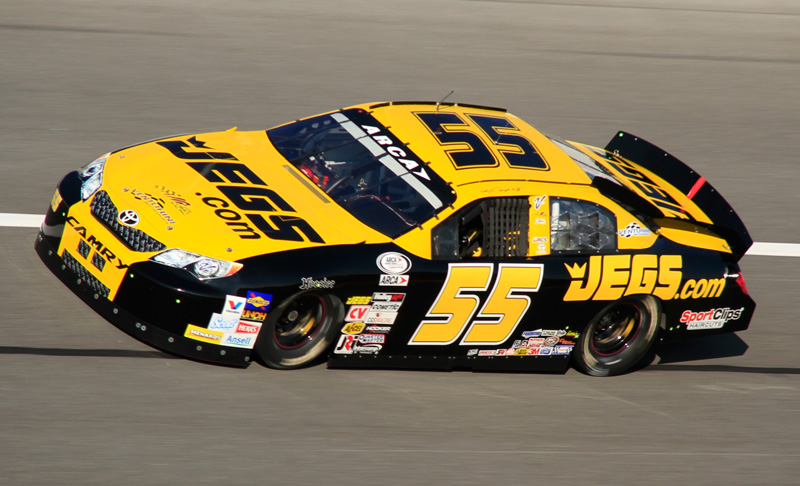 Success can be defined as “a performance or achievement that is marked by success, as by the attainment of honors.”  Joe Gibbs Racing Development driver Cody Coughlin achieved that success with Sport Clips at the ARCA Racing Series season opener at Daytona Int’l Speedway (FL).  Now Coughlin and Sport Clips have decided to continue that trend by joining forces for the International Motorsports Hall of Fame 200 this Friday at Talladega Superspeedway in Alabama.

“This is awesome to have Sport Clips support again this weekend at Talladega,” exclaimed Coughlin.  “Their support motivated myself and the team at Daytona.  We worked really hard and the results showed back in February.  Our goal is to take Sport Clips to victory lane this Friday afternoon.”

At Daytona, the 19-year-old driver started on the outside of the front row, led laps and stayed up front for the entire race to finish with a strong fourth-place outing.

This Friday’s race will be Coughlin’s 13th start in the ARCA Racing Series.  So far, he has four top-five and nine top-10 finishes.  The Delaware, Ohio native will pilot the No.55 Sport Clips / JEGS.com Toyota Camry for his first start at the famed Alabama track.  The race will be shown live on FOX Sports 1 at 5pm CT.

Sport Clips is currently in their seventh season with Joe Gibbs Racing and continues to support the JGR racing family, including Cody Coughlin as part of the Joe Gibbs Racing driver development program.

Sport Clips increased their sponsorship in the NASCAR Sprint Cup Series this season, continuing their partnership with the No. 11 Toyota Camry team with Denny Hamlin for two races and adding JGR newcomer Carl Edwards to their lineup for two races with the No. 19 Toyota Camry. In addition, Sport Clips will sponsor Hamlin for one NASCAR XFINITY Series race in the Sport Clips-sponsored Help A Hero 200 at Darlington Raceway.

In its fourth year to partner with Darlington, the national haircut franchise will use the race to increase awareness and support for the Veterans of Foreign Wars (VFW).  The "Sport Clips Help A Hero Scholarship” program provides scholarships to active-duty military and veterans who are pursuing a college degree or vocational certification. To date, Sport Clips and the VFW have granted more than $866,000 in scholarships since beginning the program in 2013.

Along with the additional support from Sport Clips, Coughlin is strong in his Faith and is appreciative that his family, which includes his parents, John & Di, and his sister Kennedi will be with him at Talladega Superspeedway.

He is also thankful to his Lord and Savior, Jesus Christ for the blessings he has received so far, not only in his racing career, but in life.

Coughlin will be on track at Talladega on Friday morning with practice from 8:30-10:20am Central Time.  Qualifying is scheduled for 2:30pm with the green flag for the ARCA Racing Series International Motorsports Hall of Fame 200 at 5pm CT.

Sport Clips Haircuts is headquartered in Georgetown, Texas. It was established in 1993 by founder and CEO Gordon Logan and started franchising in 1995. The sports-themed haircutting franchise, which specializes in haircuts for men and boys, is ranked by Entrepreneur as one of the Top 10 “Fastest-Growing Franchises” and ranks 36th in the “Franchise 500.” It is also ranked by FORBES as a “Top Ten Best Franchise” to buy for its investment category. With more than 1,300 Sport Clips stores, new locations open each month in the U.S. and Canada.  Sport Clips is the “Official Haircutter” of the Veterans of Foreign Wars (VFW), offers veterans preferential pricing on haircuts and franchises, and was named as one of the “2014 Best for Vets: Franchises” by Military Times. Our “Help A Hero” program has raised more than $3 million to help deployed and hospitalized U.S. service members call home through the VFW’s Operation Uplink™ and to provide scholarships for veterans transitioning to a civilian career. Sport Clips is a proud sponsor of Joe Gibbs Racing’s Denny Hamlin and Carl Edwards, and partners with numerous NCAA and professional sports teams. To learn more about Sport Clips, visit sportclips.com.