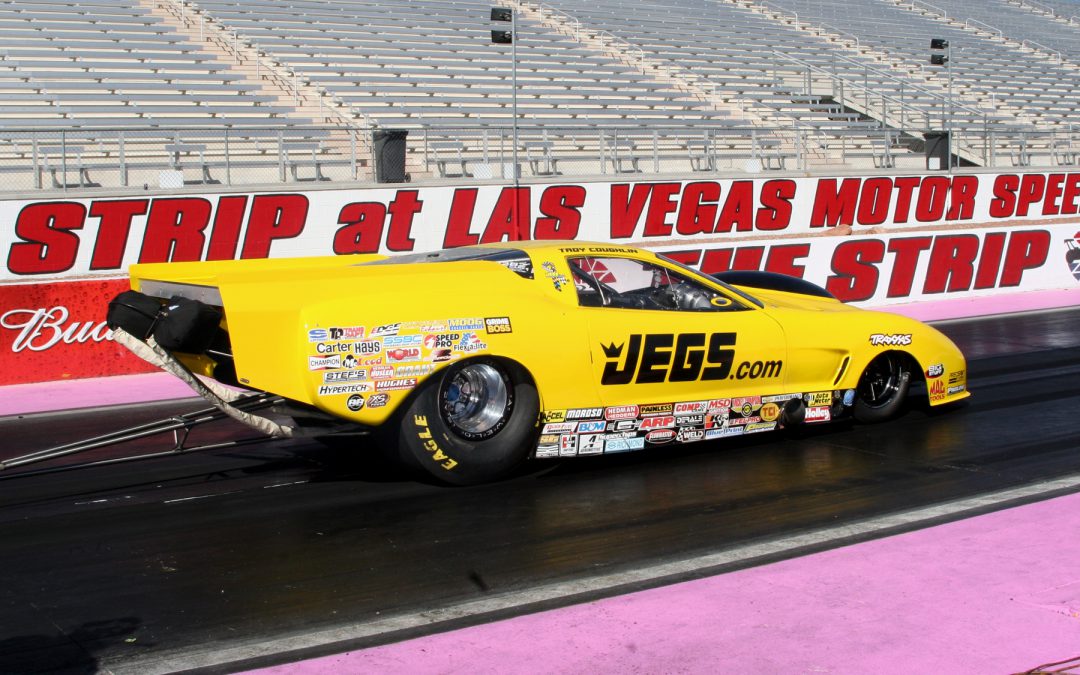 LAS VEGAS (Oct. 24) — Although JEGS.com racer won the last event on the NHRA Pro Mod Series presented by ProCare Rx and drew to within two rounds of the championship lead, he has elected to make the wildly unusual decision to switch to a new racecar for this weekend's season-ending 12th annual Big O Tires NHRA Nationals.

"The response has been the same across the board," Coughlin said. "Everyone thinks we're crazy.

"My response is pretty simple; I've driven both cars and the Corvette is better, period. All you have to do is look at the in-car camera of the old car, the '68 Camaro, and it's easy to see it was an accident looking for a place to happen. I learned how to drive it throughout the course of the season, but it was always a handful. This 2013 Z06 Corvette, on the other hand, is the smoothest racecar I've ever driven. To me, the choice was easy."

No matter which hot rod he's piloting, Coughlin has a golden opportunity to drastically affect the finish of this year's thrilling title chase. Currently, Mike Castellana is in the catbird seat with a 41-point edge over second-place Rickie Smith and a 42-point advantage over Coughlin. Lurking in fourth and fifth place are Don Walsh (-57 from lead) and Danny Rowe (-60).

A handful of bonus points are available in qualifying, but bigger gains can be made in eliminations where each round is worth 20 points.

"We have a great chance to win the race and an outside chance to win the title," Coughlin said. "That makes this a really fun weekend no matter how you look at it. Plus, we're in Vegas, so you're already having fun before you ever get in the car.

"It would be great to trim Mike's lead by a few points before eliminations and then get him early and try to take him out. Then it'll pretty much be a shootout between me and Rickie, with both of us keeping an eye on Walsh and Rowe. There are so many possibilities right now and that's exciting."