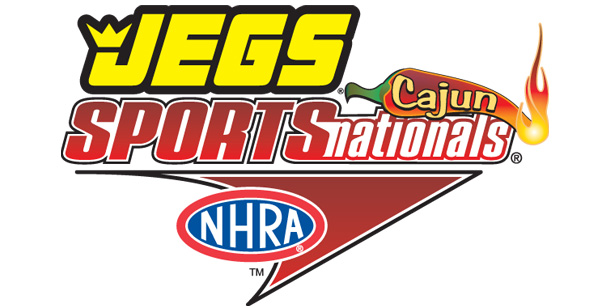 BELLE ROSE, La. (March 19) – The State of Louisiana is nicknamed “Sportsman’s Paradise” because of the abundance options for the many outdoor enthusiasts who enjoy fishing, hunting and boating there. One can also add drag racing to that list, and there is no better place for Sportsman racers than No Problem Raceway Park, the site of this weekend’s 10th annual JEGS NHRA Cajun SPORTSnationals.

The SPORTSnationals series will feature the popular heads-up class racing in Stock and Super Stock, National event champion points, National event contingency payouts, $400,000 cash and contingency postings, and a host of special features, some of which will be unique to each of the events.

Those who are fortunate enough to win at the JEGS NHRA Cajun SPORTSnationals will be in the running for the JEGS Crown trophy. The coveted award, handcrafted by Dan Dreisbach of Naked Sculpture, is awarded to any driver who can win the same class in two of the three JEGS SPORTSnationals events in a given season.

Since its inception in 2004, the Belle Rose event has become a favorite of racers across the country as it successfully strikes a balance between fierce on-track competition, and friendly off-track camaraderie. No Problem Raceway Park continues its tradition of producing first-rate events for NHRA Sportsman racing, while hosting a weekend-long party that includes plenty of Cajun food-fests and other Southern-style celebrations.