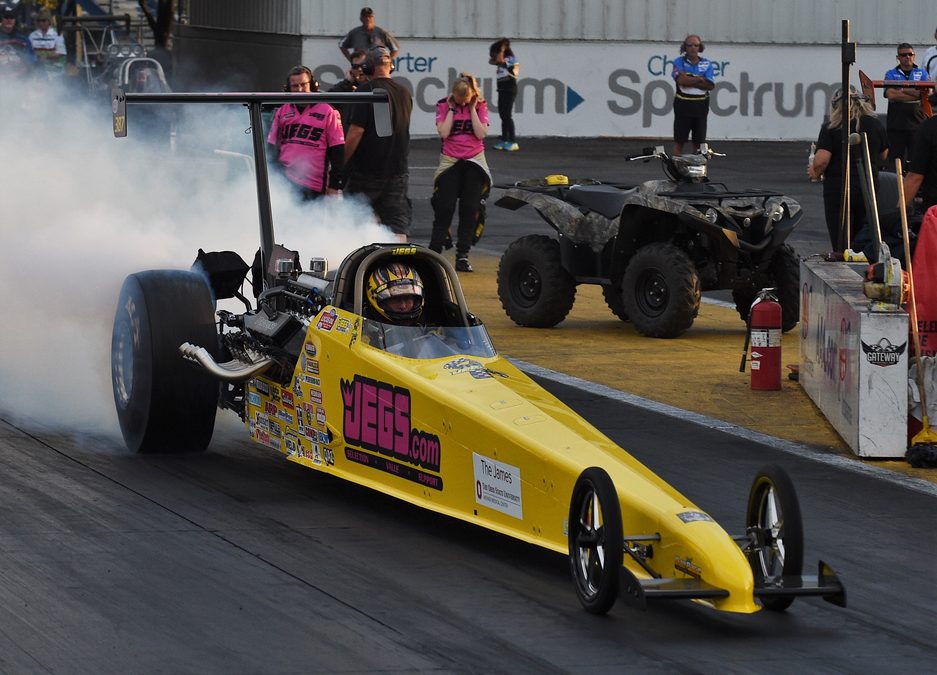 After qualifying a lofty third with a steady pass of 6.012 seconds at 227.11 mph, Coughlin suffered a mechanical issue in the first round of Saturday's eliminations and lost to Jim Prevo.

"It just wasn't meant to be this weekend," Coughlin said. "It's certainly disappointing for this to have happened to us but like golf, once you've taken a shot you can't go back and re-hit it, you simply have to move on to the next one and try your best there.

"They ran us much earlier than we expected in an effort to beat the weather and the surface of the racetrack was different than what we were hoping for but hey, everyone had to run down the same track so there's no excuses here. We just went out there and shook the tires really hard and that caused the engine to shut off. We broke a little 50-cent part and that ended our day. That's drag racing."

With Coughlin losing early in the day in the final North Central Division race of the season, good friend J.B. Strassweg was able to clinch the D-3 Top Dragster crown, meaning Coughlin will have to wait another year to try and win his third D-3 championship. He previously won D-3 Top Sportsman titles in 2007 and 2009.

However, Coughlin still has a shot at the national title but he'll need to win the Division 7 finale, which takes place Nov. 2-5 at The Strip at Las Vegas Motor Speedway.

"It's a six-round race and we'll need to win all six rounds to get it done but we have a chance and we'll do everything we can to capitalize on this opportunity," Coughlin said. "But we've already won twice with Greg Cody, Dave Raurk, Ryan Micke and Tony Collier working on this car and I know we have the pieces in place to give it a run."

Also this weekend in St. Louis, Coughlin's niece Paige Coughlin, the daughter of two-time Pro Mod world champion Troy Coughlin, continued her development in the JEGS.com Super Comp dragster she's driven multiple times in the second half of the season.

Paige left before the Tree was activated in Round 1, eliminating herself from competition.

"I've had a great time this year and learned so much," Paige said. "I learned another lesson in St. Louis but it's all part of the experience. It was a fun weekend with Uncle Mike and my dad and that's worth a lot.

"I did my burnout and backed up. When I went to stage I was in second gear instead of first so the trans-brake button didn't lock the wheels like it does when you're in first gear. It happens. It's a pretty common mistake. Hopefully this will make me a better driver."