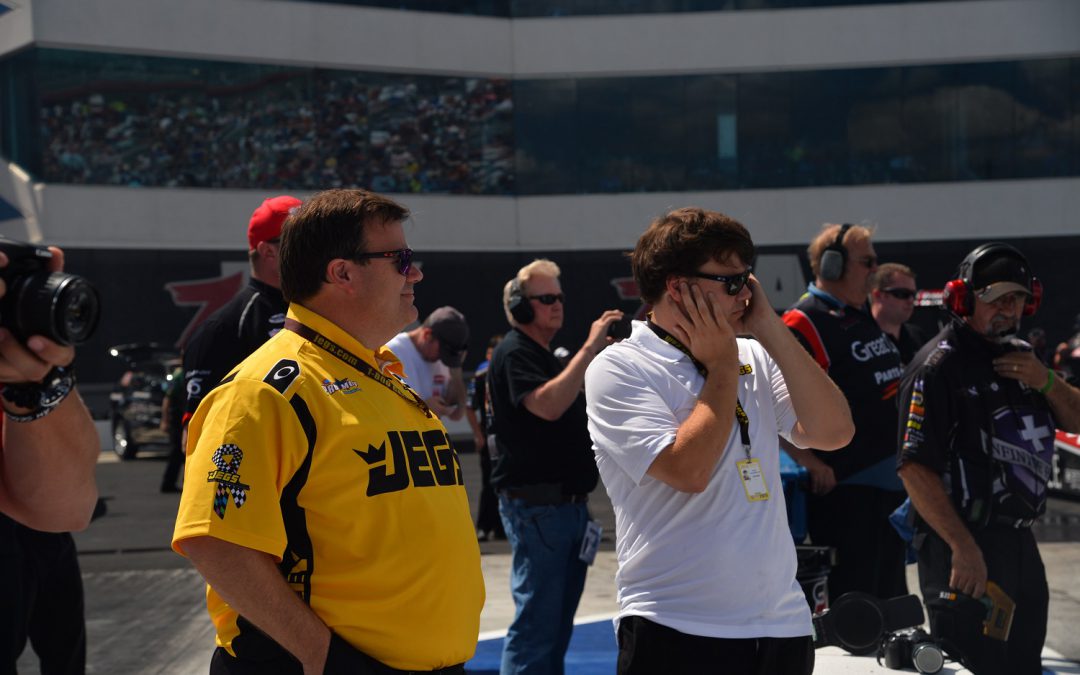 ST. LOUIS (Sept. 23) – The JEGS.com Pro Mod father-son duo of Troy Coughlin and Troy Coughlin Jr. have a determined look as they head to this weekend’s NHRA AAA Insurance Midwest Nationals at Gateway Motorsports Park. The event is the next-to-last on the 2015 schedule for the NHRA J&A Service Pro Mod Drag Racing Series.

Coughlin currently sits second in the championship points and has been plenty busy since last Sunday's stop in Charlotte, where an engine fire in Round 2 caused extensive damage to his Corvette Stingray

"It's been a thrash," Coughlin said. "We rewired and re-plumbed all the damaged areas. We built a new front end and mounted it. We put a new engine in the car and had to replace the wiring all around the engine harness. Even the driver’s side door needed work. There was a lot of damage but the JEGS.com crew got it done. This is a good group of fabricators, welders and carbon fiber guys."

With just St. Louis and Las Vegas remaining on the schedule, Coughlin knows a good showing this weekend is a must.

"St. Louis is definitely a big deal for four or five of us in the top 10," Coughlin said. "We've got to start shining and get all our ducks in a row. We're looking forward to it. The St. Louis fans are great, and they have a really good crowd there. We're looking forward to getting started with both cars. Troy Jr.’s car is running a lot better than it's been, and we're excited to get them both there and keep kicking at it and get one of us to the win light, for sure.

"We hope to have another chance like we had in Charlotte where I meet (points leader) Mike Janis early in the day. I was fortunate enough to take him down there but didn't capitalize on it as much as I wanted with the fire in Round 2. We gained a round but we still have work to do to catch him. We're only 46 points back, so it's doable, but we can't have any more hiccups. St. Louis is so critical.

"It's also going to be a lot of fun racing with my son and brother Mikey also. He's coming over to run Top Sportsman so we'll be able to cheer for him as well."

While the St. Louis meet looms large in Coughlin's championship battle, it also is important to his son, a rookie in the NHRA J&A Service Pro Mod Drag Racing Series. Coughlin Jr. enters this weekend in sixth place, 99 points behind Janis.

"Back-to-back races gives me a chance to keep my mind fresh, as far as being in the seat,” Coughlin Jr. said. “I'll get ready, look at the conditions, look at what I'm about to step into. I'll be as proactive as possible.”

An accomplished Sportsman racer, Coughlin Jr. is concentrating primarily on the Pro Mod class this season, but will pull double duty in St. Louis as he has at many events on tour.

"I’m running Super Gas, too, so that's going to make me feel even more at home,” Coughlin Jr. said. “Hopefully, it will keep me on my toes and keep me fired up. I need to follow the steps that build success in that class, and that's being tenacious and being proactive, knowing the conditions and really following it.

"I haven't studied the Pro Mod points very much like I did in my full-time Sportsman days. I've been taking it one round at a time and trying to get better and better and better. There's no ceiling for knowledge in this whole sport, especially in Pro Mod. It's such a challenge, working on the communication with my team and trying to perfect it. I really want to make one perfect attempt seven times. It takes someone very special to be very good at this."

Pro Mod qualifying will begin on Friday with sessions scheduled for 2:15 and 4:45 p.m. Qualifying continues on Saturday at 1 p.m., followed by the first round of eliminations at 3:45 p.m.