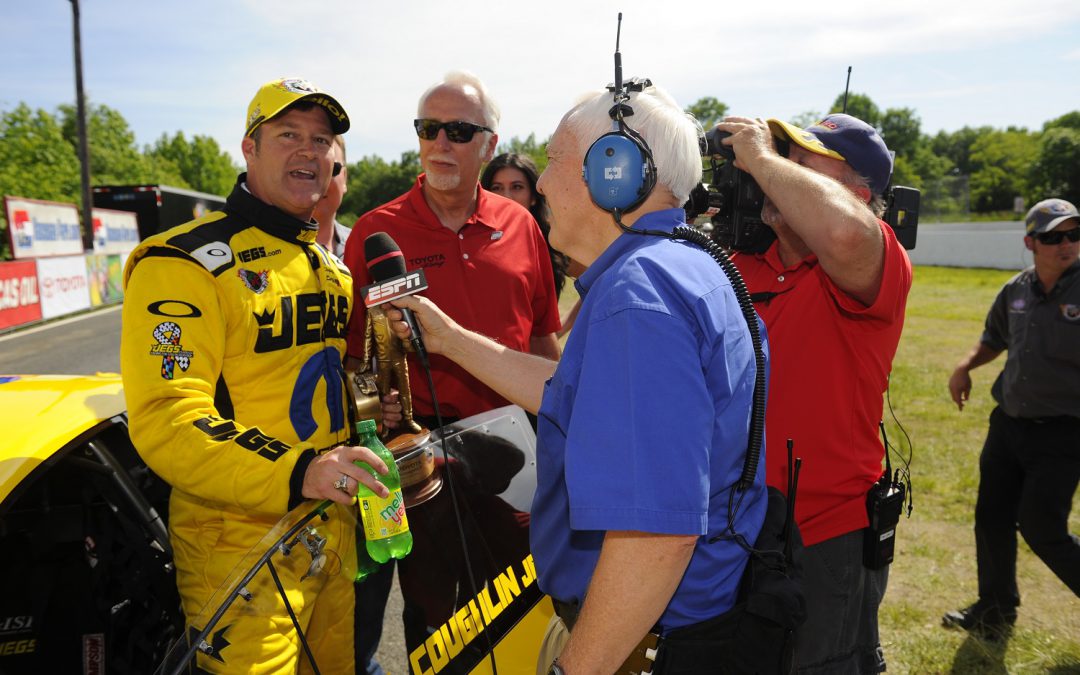 BRISTOL, Tenn. (June 9) — Five-time Pro Stock champion Jeg Coughlin Jr. used a pair of victories and a runner-up result at consecutive drag races in Atlanta, Topeka and Englishtown to vault from ninth to second place in the world rankings. Now he's hoping to keep his incredible streak alive as the NHRA tour begins a string of four straight national events this weekend at the Ford Thunder Valley Nationals at Bristol Dragway.

"I've always kind of liked when you race every weekend," Coughlin said. "It's tougher on the crew, for sure, and your margin for error narrows when you sometimes don't have time to go back to your shop and reload between races. At the same time, you tend to get into a groove and focus on the task at hand without a lot of outside interference, so from a driver's perspective, it can be very advantageous.

"Certainly, it's a lot more fun have back-to-back races when you're running well and this last three-in-a-row stretch was just fantastic for us. The JEGS.com/Mopar Dodge Dart found the winner's circle twice and our teammate, Allen Johnson, put his Mopar hot rod on top in Topeka with us in the other lane, so as a team we can't do any better."

Coughlin knows this is a big race for Johnson and both crews as J&J Racing is located in nearby Greeneville, Tenn., placing an emphasis on turning in their best performance in front of Johnson's hometown fans.

"There isn't much we want to change on the cars," said Coughlin, who actually is tied with Johnson for second place in the points. "Both of us are running really well. It's more a matter of fine-tuning some little things that Adam Hornberger and Mark Ingersoll, our crew chiefs, want to do.

"This race will be a fun one for all of us as the guys will be close to home so we'll have lots of family and friends with us. That always makes it special, and of course you want to show off a little if you can. It won't be easy; it never is, but we'll be as prepared as possible to have a good weekend."

Having won Bristol in 2007, Coughlin counts the track among one of his favorites, although for many more reasons than his personal success at the facility.

"Thunder Valley is just an awesome place," he said. "It's so picturesque and the noise rumbling around those hills when the cars are running is so cool. Bruton Smith knows how to do things in a first-class manner and this is yet another one of his top-notch facilities.

"You have to love the Bristol fans as well. These folks know racing, all forms of it, and they appreciate what it takes to compete and make these cars go 215 mph. I hope to add some more great memories this year."

Pro Stock qualifying sessions are scheduled for 5 and 7:30 p.m., Friday, and 12:30 and 3 p.m., Saturday. Eliminations begin at 1 p.m., Sunday. ESPN2 will carry all qualifying and elimination action.