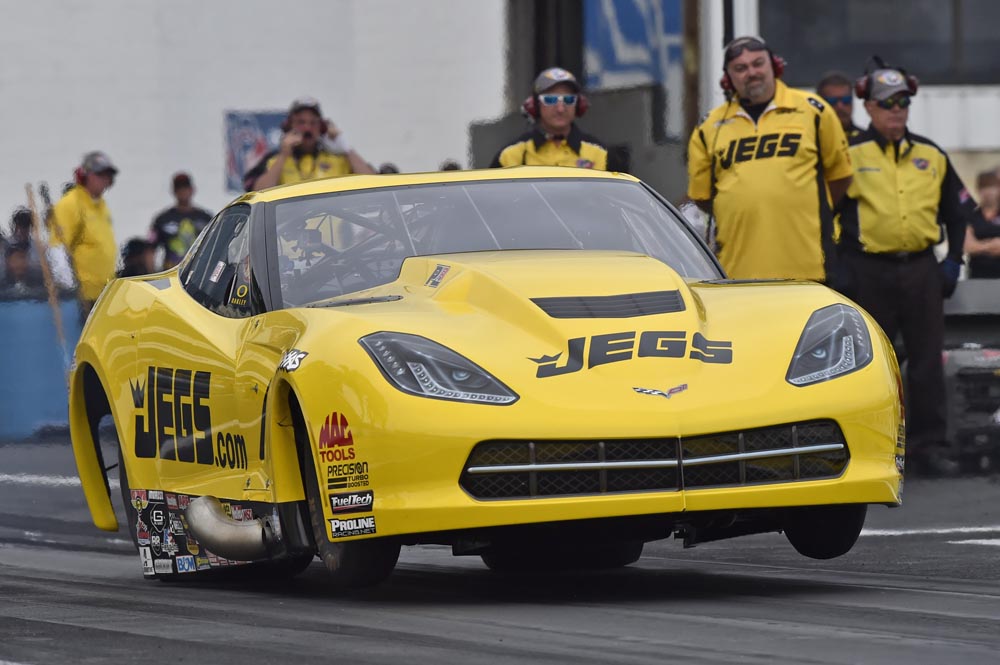 ENGLISHTOWN, N.J. (June 7) — The second round of the NHRA J&A Service Pro Mod Drag Racing Series race presented by Smithfield Foods and Western Beef didn't go nearly as well — or as long — as the first round for the father/son JEGS.com team of Troy Coughlin Sr. and Troy Coughlin Jr.

After both drivers made stellar runs in the first round of the Toyota NHRA Summernationals on Saturday at Old Bridge Township Raceway Park, Sunday was a struggle.

Neither driver was able to make full runs Sunday, and Troy Sr.'s day was essential over before it had a chance to start. Facing Billy Glidden, Troy Sr. had an issue with his JEGS.com Corvette and was unable to stage.

Englishtown fans enjoyed the apparent staging duel, but it was no duel at all."There was an issue with the car and there was no reason to stage," Troy Sr. said. "If I went up there with the mindset that, 'My car is way better than his,' why even go through something like that?

"But when it won't move, what other option do you have? It wouldn't move. I didn't know what to do. I just had to sit there and wait until he staged before it could do anything."

"We just didn't have a good day," Troy Sr. said. "It started off this morning, and things didn't go the way they should've, that's for sure. We'll keep working on it and keep thrashing on the project."

Troy Jr.'s day started better, as he left on No. 1 qualifier Mike Janis with a .044-second reaction time, but Janis' .051 deficit was gone early in the run as Troy Jr.'s car got sideways at the hit.

"I let go of the button, and it just kind of chattered really hard," Troy Jr. said. "I pedaled it and got back in it and watched Mike Janis cross the finish line."

"We had a little bit of a laptop failure that didn't quite help us out," Troy Jr. said. "Toshiba's going to be getting some business here soon."