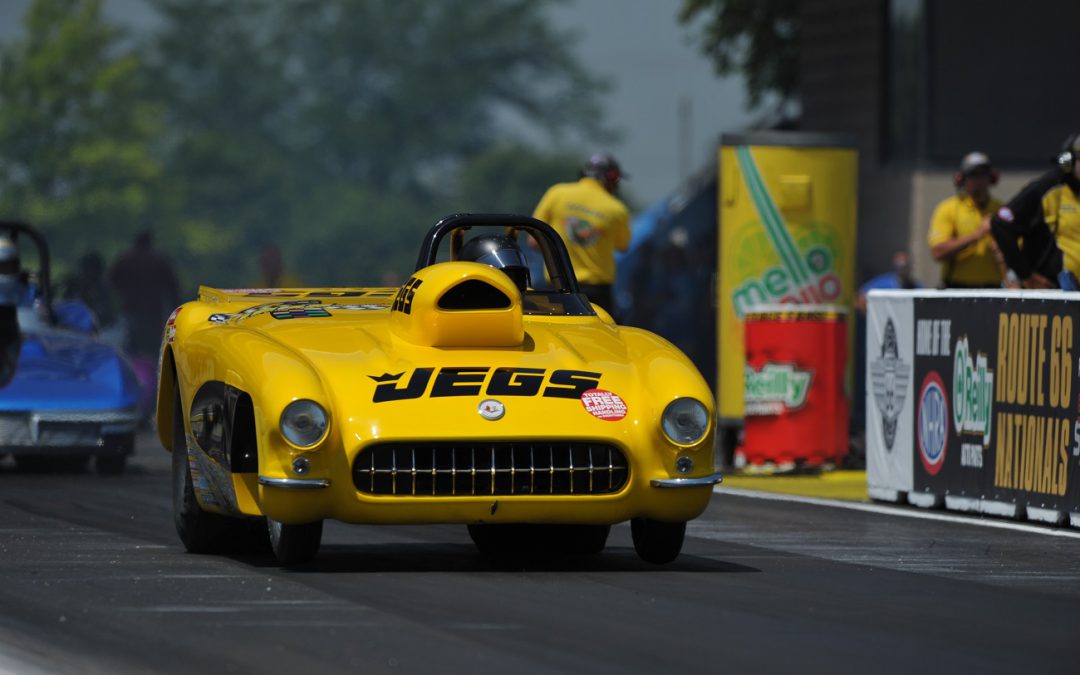 INDIANAPOLIS (Aug. 26) — Coming off a hard-fought win and a runner-up result in the last two weekends, third-generation drag racer Toy Coughlin Jr. arrives at Lucas Oil Raceway at Indianapolis for this weekend's 60th annual Chevrolet Performance U.S. Nationals with high hopes of earning another victory at the sport's biggest and longest-running event.

Coughlin claimed the Super Gas title at the Division 1 race in Cecil County, Md., two weekends ago and followed that up with a runner-up result in Super Gas this past Sunday in a Division 3 race at Beech Bend Raceway Park in Kentucky. Obviously, his JEGS.com Corvette roadster is running extremely well heading into "the Big Go."

"All credit to the JEGS.com crew," Coughlin said. "Justin Beaver, Rick Rossiter, Tony Collier, and Greg Cody have given me a perfect race car and that's increased my confidence as a driver. When you combine a great race car with a driver that can do his job you have success, and we've been on a roll lately.

"Beech Bend was a good test and probably a great lead-in to Indy. The track was very warm and I expect we'll see very similar conditions at Lucas Oil Raceway. If we stick to what we're doing, we could have another exciting weekend."

As he does each weekend, Coughlin will be racing in two different eliminators in Indy. In addition to his Super Gas Corvette, the son of Pro Mod world champion Troy Sr. will wheel his JEGS.com Super Comp dragster. Coughlin actually won Indy before in Super Comp when he claimed the trophy there in 2010.

"There's a lot of history with this race," Coughlin said. "It's the oldest event on the circuit and it's the one everyone points to as the race they want to win. Our family has made a bunch of history here as well, so that magnifies the importance of this event.

"I was struggling earlier this year, and we kind of reset our thinking and just decided to go back to racing with fun being the top priority. We stopped talking about points and wins and just started having fun again and it kind of lifted all the pressure off of us. We won't be changing that approach this weekend."

Adding to the festivities this weekend, Coughlin will be racing alongside his father Troy Sr. and uncle Jeg Coughlin Jr. in Indy. Troy Sr. will be battling in Pro Mod, where he won the series championship in 2012, while six-time world champion Jeg will be vying for glory in Pro Stock. Both Troy Sr. and Jeg won Super Gas titles at Indy in the past, Troy Sr. in 1991 and Jeg in 1992.

"Racing with Dad and Uncle Jeg always lifts me up," Coughlin said. "They've both done so much for my career and I look up to them so much. I hope to do them proud this weekend."