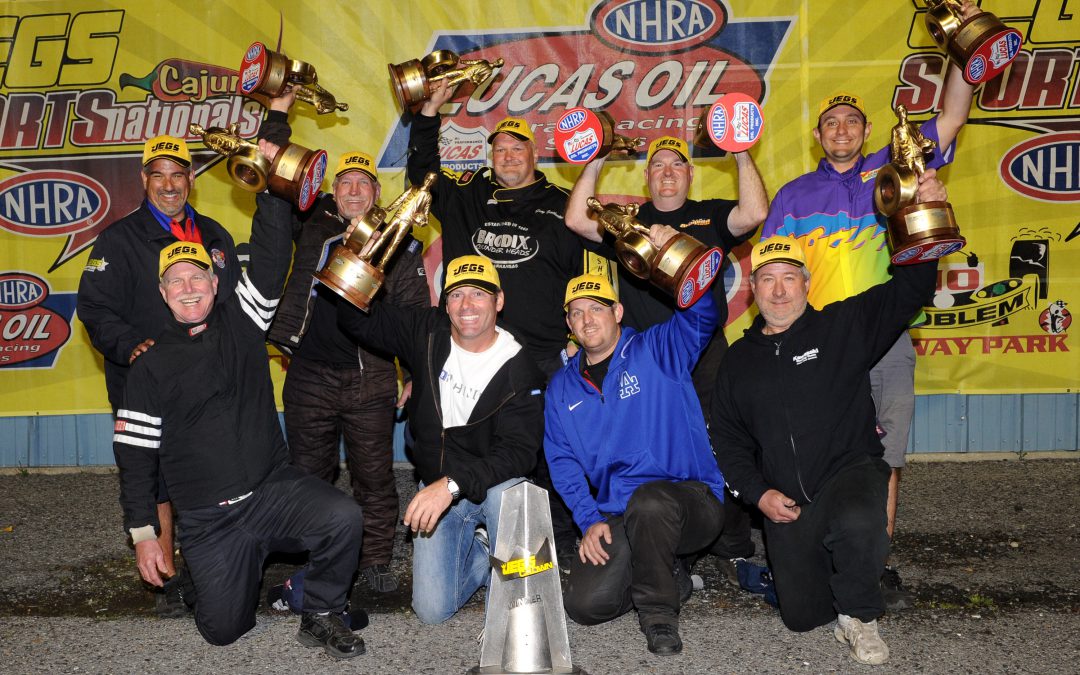 BELLE ROSE, La. (March 25) – Steve Szupka of Willow Grove, Pa., became the 15th driver to claim a double victory at an NHRA national event when he drove to the Comp and Stock Eliminator titles at this weekend’s 10th annual JEGS NHRA Cajun SPORTSnationals at No Problem Raceway Park.

In Comp, Szupka drove his G/EA roadster to a win against the dragster of Jim Kimbrough. He returned a short time later to collect the Stock Eliminator title when he beat former JEGS SPORTSnationals champion Austin Williams.

The familiar yellow and black JEGS Mail Order colors were present on track in Belle Rose as third-generation racer Troy Coughlin Jr. competed in Super Comp and Super Gas. Fresh off his Super Gas victory a week earlier in Gainesville, T.J. recorded a Round 2 finish in his JEGS.com dragster and a third round finish in Super Gas behind the wheel of his JEGS.com Corvette roadster.

"We had a good weekend but obviously not as good as last weekend," Coughlin said. "I red-lighted by 11-thousandths of a second in Super Comp and I just flat got beat in Super Gas. I did manage to get some good practice in and that’s important because more than ever this year we’re focusing on making good runs. The weather was a bit tricky and that was a challenge so we can definitely use this experience going forward.

"The one good thing about the Cajun SPORTSnationals is that you don’t have to win in order to have a great time. We got to hang out with a lot of our friends and eat a lot of great Cajun food, so we definitely had a great time."

Despite the early loss, Coughlin still enjoys a top-10 ranking in the Super Gas class and intends to stay there as he continues his pursuit of an NHRA national championship. Following the Gainesville win, he was in sixth place out of the nearly 300 drivers who have thus far entered an event.

"In Super Gas, the Corvette is a weapon," said Coughlin. "It’s extremely consistent and that gives me a lot of confidence. This year, we decided to put forth more of an effort to chase points in Super Comp and Super Gas and so far it’s paying off. I’m really enjoying it."