T.J. Coughlin excited to step in to JEGS.com Pro Mod for 2015 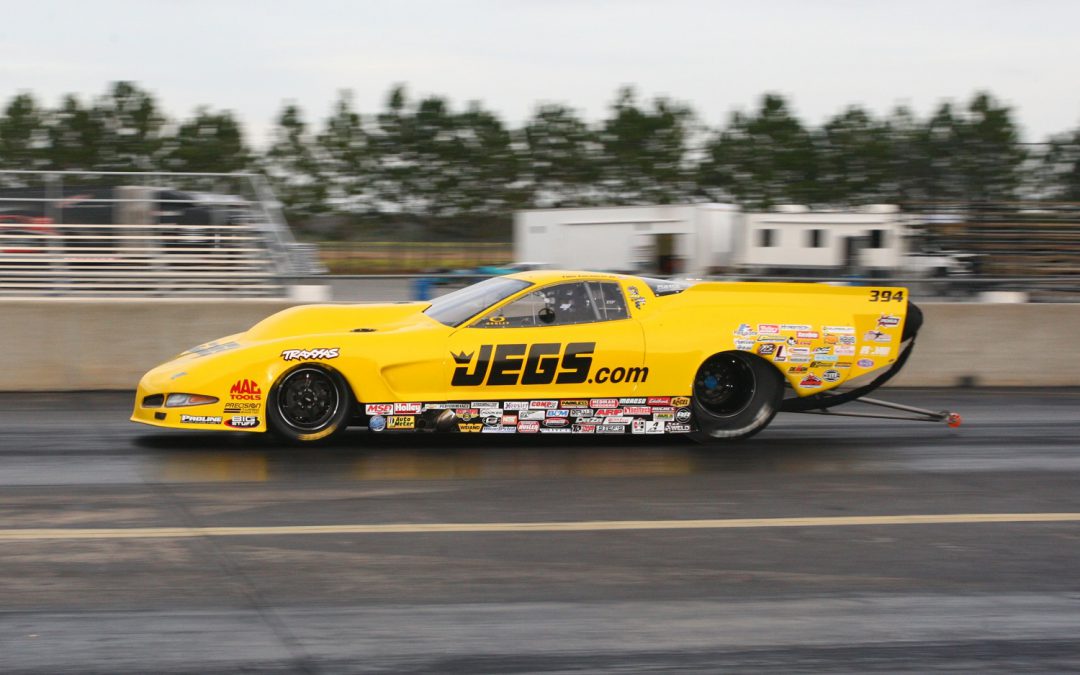 GAINESVILLE, Fla. (March 6) – There may be no racecar driver more excited for the Amelie Motor Oil NHRA Gatornationals at Auto-Plus Raceway at Gainesville than JEGS.com Pro Mod driver T.J. Coughlin.

After a successful Sportsman career, Coughlin, the son of 2012 Pro Mod champion Troy Coughlin, will make his professional debut at the Gatornationals. He'll drive a JEGS.com Corvette alongside his father in a two-car effort led by crew chief Steve Petty.

"It's pretty much my pure imagination to be in a class like that," Coughlin said. "To see your name on the door of a professional-class car is very majestic for me. I was once a kid in the stands watching those cars, and to get in a car with my name on the door – there really are no words for it."

Coughlin isn't taking the opportunity to step up to a pro class lightly.

"I'm very grateful," Coughlin said. "I'm backed by the greatest folks: Steve Petty, Mike Rees, Justin Beaver, Kyle Pettis, my dad, Scott Woodruff – everybody. I race for a great company, JEGS Mail Order. It just doesn't get any better. It's almost like Christmas in a way.

"I race for a great family: My parents, my cousins, uncles, aunts, grandparents. It's a big honor, and I'm excited to take on the challenge."

The Coughlin family is a tight-knit group, and T.J. is close to his father, so racing with him this year in the J&A Service Pro Mod Series is a big deal.

"Racing with dad is the whole reason why I ever started racing," Coughlin said. "I always wanted to race so I could be with my dad. Being in the same class is going to be a lot of fun, and a lot of good memories are going to be created, that's for sure."

Coughlin tested his JEGS.com Pro Mod car at Valdosta, Ga., recently, and will either drive the car their or Bradenton, Fla., early next week in preparation for the Gatornationals. A Pro Mod car is a different animal than Coughlin's Super Gas or Super Comp cars, so there has been a learning curve.

"The way the power is brought in, it's not just press the gas, and it goes," Coughlin said. "You have to get used to the feel of the power and the way it's brought in. It's definitely more of a numbers project. Steve Petty and those guys do a great job of making this thing as easy as possible to drive.

"You'll step on the throttle, and the power doesn't roll in until a certain point. The normal ratio of when the power starts to come in – like a burnout – is a little bit delayed. But when it rolls in, it rolls in hard."

Coughlin, though, has proven to be a superb Sportsman racer, winning the NHRA Division 3 Super Gas championship and numerous races during his young career. He's ready for the next step.

"My goals for this year is to roll into every race, be prepared mentally and physically as a driver to help put forth the perfect effort and perfect attempt and to race together as a team and communicate and not let my guys down," Coughlin said. "We want to represent the company, my family and the NHRA in the correct manner."