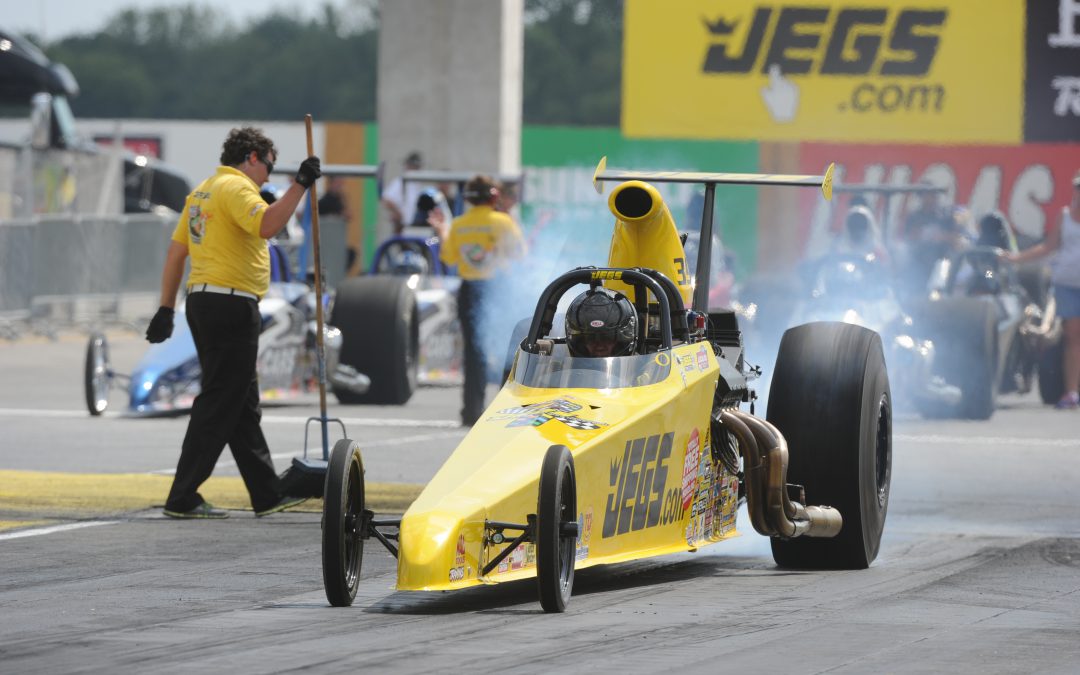 HEBRON, Ohio (Sept. 18) — Troy Coughlin Jr. has proven adept at handling the pressures of NHRA drag racing in coolly winning three national events and a handful of sportsman and bracket races in his career. His famous racing father, grandfather and uncles have taught him to stay on an even keel, both in victory and defeat.

This year, T.J., as friends and family know him, has seen a significant uptick in the stresses of the job as he has been ranked at or near the top of the national and divisional leader boards in both his JEGS.com Super Gas roadster and his similarly-branded Super Comp dragster.

"My Uncle Jeg and my dad always taught me to keep control of my emotions," T.J. said. "It's something we all believe helps you deal with the racing season because it's a long haul from when you start in February or March to when you finish in the late fall. It's not for a lack of passion, that's not the case at all, it's just a matter of keeping things in perspective. Drag racing has a way of keeping you humble."

T.J. will get a chance to show his nonplussed ways once again this weekend in one of his biggest events of the season, the JEGS Northern SPORTSNationals at National Trail Raceway in the suburbs of his native Columbus, Ohio. It's a big race for his hometown, his family's business, the 350-plus associates of JEGS High Performance who will be on hand cheering him on, and most of all his championship hopes.

"We're fighting to the finish," T.J. said. "There are still a lot of people in Super Comp and Super Gas, both in Division 3 and at the national level, that are in the hunt for these championships. It's probably going to come down to a point or two in the end so every single round is crucial.

"We're only collecting points in Super Comp this weekend, but we are racing both cars. I've already got enough events in Super Gas and I'm down to the SPORTSNationals and a Div. 2 race in Reynolds. Ga., in Super Comp. This weekend counts as a national event so it's really important to do well. We have to make sure the car is perfect and I need to do my job behind the wheel every time we pull up to the starting line."

To help him finish strong, T.J. will unveil a new Miller Race Cars dragster this weekend.

"The Div. 3 championship is closer than the national championship in Super Comp so it would be great to go a bunch of rounds here," T.J. said. "We're going to do all we can to turn on those win lights.

"The JEGS SPORTSNationals is big for our family. It has our name on it so it's something we want to be perfect for all the racers and fans. We're racers and fans ourselves so we know what it's like to be at a big race. My hats off to Woody (Scott Woodruff, JEGS marketing), my sister Meghan and Eric Lotz from the NHRA for doing all the hard work to make this race happen."

Aside from the JEGS SPORTSNationals, T.J. is one of 16 qualified drivers who will take part in the Moser Engineering Shootout, adding to the excitement of the weekend. The one-eighth mile bracket race will be held Saturday.

"Rob Moser and Tim Irwin set this deal up and it'll be really cool," T.J. said. "They take two cars from each class plus two wildcards and we all get after it. I'm racing the Vette (roadster) and that car's been running really strong so it should be fun."