Team JEGS basks in one of its best seasons ever 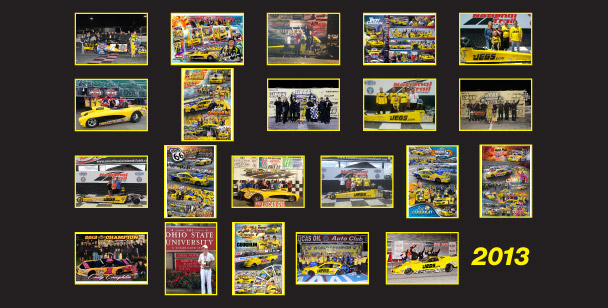 DELAWARE, Ohio (Dec. 23) – Wins and championships have become as much a part of Team JEGS as the familiar yellow-and-black of its racecars, but 2013 was an exceptional year for the extraordinary family with amazing successes across the spectrum of competition.

“In one way or another, we all had some amazing results this year,” said Jeg Coughlin Jr., who led the way for Team JEGS by winning his fifth career NHRA Pro Stock championship and sixth overall drag racing title. “Our success in the past has set the bar pretty high, but this year was special for everyone, no doubt about that.”

After much speculation earlier in the year, Troy Coughlin was the driver who ended up securing the family’s 100th career NHRA victory when he won the NHRA Pro Mod Series event in October at The Strip at Las Vegas Motor Speedway.

Although Troy won the honor, he said the lion’s share of the credit goes to his brother Jeg Jr., who won 72 of the 100; so Troy immediately dedicated the win to his brother and presented him the trophy.

“I thought about it for a long time,” Troy said. “We’ve all raced about the same amount of years, and every now and then, someone asks, ‘Which one of you guys is the better driver?’ I say, ‘You’ll have to let the trophies speak for themselves and Jeg’s got a ton of them. The rest of us have a good amount, but he’s got the most.”

Troy’s gift turned out to be the last trophy Jeg captured in 2013. In Las Vegas, Coughlin was putting the wraps on his four-victory, championship-winning season in Pro Stock and merely needed a single round win at the season finale to clinch.

“It’s been an extremely special championship for us in a number of ways,” Jeg said. “It’s always a challenge to get those round wins, those race wins and that ultimate Mello Yello prize – the world championship.

“It was such a team effort, such a family effort between Allen and Roy Johnson and everyone at J&J Racing, Mopar, JEGS.com and everyone with our race program. We were well prepared right from the start of preseason testing and that is a testament to the entire team.”

The JEGS.com/Mopar Dodge Avenger was strong out of the gate, going to two finals in the first three races. Jeg broke through at Topeka to capture his first win of the season before going on to win in Chicago. His three final-round showings in the Countdown, that included wins at Charlotte and Reading, sewed up the title.

“We raced as a team from the very beginning of the season, which is tough to say in any form of motorsports,” Jeg said. “Mentally this has probably been the most difficult championship I’ve won. We had three or four really good teams that had a mathematical shot at winning the championship all the way down to the final race so we had to perform as flawlessly as we could throughout the Countdown, and thankfully that’s the way it went down.”

Troy followed his 2012 championship in Pro Mod up with a second-place finish this year that included wins in Charlotte and Las Vegas as well as two other trips to the finals. He also took his turbocharged JEGS.com Chevy Corvette back to Las Vegas in the postseason where he won the PSCA Street Car Supernationals.

“What can I say about (crew chief) Steve Petty, Brian Metzenheim, Mike Rees, Kyle Pettis and my family back home? You can’t lose when you’ve got a support group like that behind you,” Troy said. “And all 400 folks back at JEGS.com supporting us each week, it’s pretty awesome. They make it easy for us, that’s for sure.”

Troy Jr. came into his own as a driver this season with stellar years in both Super Comp and Super Gas.

“I’m always learning,” T.J. said. “There always things you can do better. There were some costly mistakes that kept me from a national championship this year, but I learned from them and won’t make them again. I’ve got a lot of good people helping to get me better. From my Uncle Jeg, Uncle Mike and Uncle John, to my dad, they all know how to put me on the right path when I feel like I’m not doing something right.”

T.J. was in the mix to win the national Super Gas championship until the last weekend of the season. He ultimately finished third nationally but won the Division 3 crown. He also was third in Super Comp in Division 3. All told T.J. racked up four race wins, two at the divisional level, one nationally and one at a high-stakes bracket races.

“It’s been unbelievable for us as a whole and a pretty big year for the third generation,” T.J. said. “It seems too good to be real at times. But this is the time of year to soak it all in, celebrate our successes and then get ready to start Day 1 of a new season.”

The championship efforts extended beyond the drag strip for Team JEGS in 2013 as other third generation Coughlins won titles in their chosen areas of sporting excellence.

Cody Coughlin, the 17-year-old son of John and Di, won the JEGS/CRA All-Stars Tour title on the strength of two wins and seven top-five finishes in the stock car racing series. He notched another victory in a rival series to push his season total to three.

“My parents and my sister Kennedi were great motivators for me all year long,” Cody said. “I got a little tough on myself at times but they were always there to remind me to enjoy and cherish moments like this championship. I really thank my entire family for being there for me.”

Jeg Coughlin III, the son of Jeg Jr. who is better known as Jeggie, won the Ohio Division III state golf championship at the Ohio State University Golf Club with a two-day total of 73-71 (144), a total that set a state record.

“I’m only a junior so I have a shot to come back and repeat next year,” Jeggie said. “That would be pretty cool but no matter what we’ve got this title to enjoy and I can’t wait to see what happens next.”

“It’s truly been an amazing year for everybody,” Jeg said. “There’ve been a lot of contributions to make everyone in the family and at JEGS.com proud. It’s going to be tough to top what we’ve done this year but I’m sure I speak for everyone when I say we’re more than up for the challenge.”