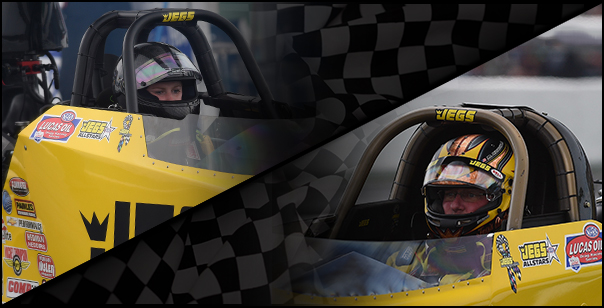 Mike will have two great chances to bag a Wally trophy as the first half of the double header is a continuation of the rain-delayed North Central Division's season-opener from late April. Mike was the No. 1 qualifier in Top Dragster that weekend so he'll be considered the favorite when eliminations begin.

"Gosh it seems like it's been a year since that weekend," Mike said. "I think probably the biggest difference between then and now is we were obviously a little closer to our season-opening win in Pomona so we were still feeling great from that victory. However, that Pomona set-up probably wouldn't do us much good this weekend because it's supposed to be super-hot in Indy.

"I'm actually good with the delay, even though we were top qualifier and running so well in April. We simply know what the car wants and doesn't want much more now than back then. We're so much further ahead with the tune-up, especially when we encounter different track conditions."

To prepare for the first race, Mike will test his JEGS.com Dragster Wednesday, before making one more official timed run Thursday morning. Then he'll be thrust straight into elimination action.

"No problem," Mike said. "Our racecar worked as good as it ever has last weekend in Hebron (Ohio) thanks to my guys; Greg Cody, Dave Raurk, Ryan Micke and Tony Collier. We'll take it to Indy and do the exact same thing we did in Hebron, minus the driver error from Round 1, and try to win both of these races."

Once the April race is concluded, racers in all classes — including rookie Paige Coughlin in Super Comp — will begin to qualify for the originally scheduled Summer Shootout beginning Friday. Qualifying will continue Saturday morning followed by eliminations.

"We had a great first race last weekend," Paige said. "My JEGS.com Super Comp dragster was named 'Best Engineered Car' and I was able to go three rounds on race day considering that was my Sportsman debut, I was super happy.

"I learned a lot but I know I have so much more to go. I'm excited to race with my Uncle Mike again this weekend and get some more laps. I know one thing for sure, this smile on my face isn't going anywhere any time soon."

Mike and Paige are bringing some built-in cheerleaders with Mike's son Clay, a budding Junior Dragster racer, and Paige's older sister Meghan, a new mom that has put her racing career on hold for the time being.

Tickets are $10 each day and children 12 and under are free. For more information, visit www.LucasOilRaceway.com.