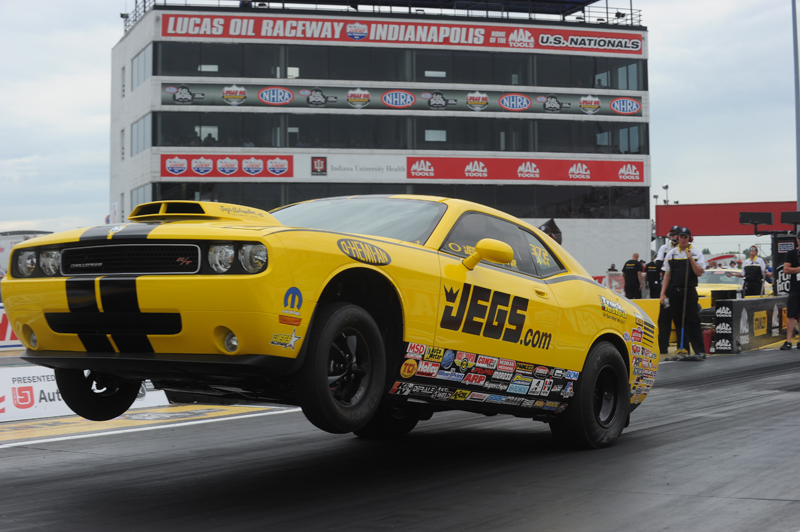 Why? Because the engine was damaged in Coughlin's turbocharged Camaro in the first round, hampering his efforts for the rest of the day.

Coughlin was eliminated after he red-lit in the semis against Mike Castellana, who had problems during his run, too.

"We had good qualifying and a good effort," said Coughlin, who qualified No. 2. "We just had a part break in the engine. We kept trying to limp it along. We were happy enough to go a couple rounds."

In Round 2, Coughlin damaged engine was out-run by Todd Tutterow, but Coughlin got to the finish line first because of his better reaction time. Coughlin left first (.021 seconds) and made a pass of 5.951 seconds at 251.67 mph, beating Tutterow's quicker 5.929 at 246.17 mph.

Coughlin then raced Castellana in the semis, hoping to pull off an unlikely win.

"We were hoping he would have a problem, and he did," Coughlin said. "But it just wasn't our day."

That's because when Coughlin bumped in the staging beam, he went in a tad too far.

"In the semifinals, I think I just got too deep in the first light, and when I went into the second light under power, it just went a little bit further and enough to create it to go red when I let go of the button," Coughlin said. "It was pretty close."

Coughlin Jr., the 2010 Indy winner in Super Comp, fell on a double-breakout to Stinnett, who was .005 seconds under his index to Coughlin's minus-.012.

"This is such a fun race to win," Coughlin Jr. said. "It's a disappointment how the race went. I should've been better than .056 on the Tree. He was .020 and still went under. I should've killed more ET, and I could've gotten away with it. It's just a bummer I couldn't finish.

But it was a good weekend for Team JEGS drivers across the board.

"Not a bad weekend," Coughlin said. "T.J. got to the semifinals, Jeg got to the quarterfinals, and Cody finished seventh. Good weekend for Team JEGS."